I have a 91 ef. Origa navy dual point. Has been converted to multi and obd1 ecu/ bay for ls v,,

I have a re pined jumper I'll do whatever with and a fresh untouched one minus the male end of the ten or twelve wire connector for 4 wire 02 v tech ect..
I got it back from being stolen and replaced with same components. I had a local shop do the fuel injection and obd1 conversion a long time ago. Now that I am trying to get her going I can get ignition functions as far as lights according starter but I haven't been able to get fuel. I have pump action I am properly pinned into my p28 a1,3,5,7 and a15 as pwr. Do I need resistor box? I have obd 1 injectors. Also there are two wire from dizzy not sure if original color but they run thru drivers side into ignition and fuse box I believe. If u have a a to z on how to do whole thing I'll start fresh but if u know anything I don't and think it may have to do with those wires. I'd like help. I moved c1 ,2 over to b 10 and 12, witch were supposed to be open on my harness but 10 had a white/red wire. I believe it ran to dizzy but it's not plugged in anywere. Being a shop did it and I have a wire that according to the diagrams I have shouldn't be there I'm just about confused at this point. Harness schematics, jumper pins and ecu, if I can obtain those from someone I will just start deleting and running my own harness pin to component in the areas in witch I feel may be a problem. I have 8 pinobd1 dizzy only 7 used. I'm mainly concerned about the dizzy wires not being hooked up properly. Everything says move c 1 2to b10 12 but the wires to ignition and like I said fuse box I believe are the ones I'm being told to take to c pins on ecu after you open them up. Does this mean splice them at dizzy. Idk I figure I need this both ways. I believe they're crank pos. Could be wrong but thats why I'm asking. Help

Staff member
Admin
VIP
p28 wants saturated injectors. sounds like you've got the right ones there, so no resistor box is needed.

Does the wire to the ignition look stock? it might have been for a killswitch/alarm/etc.

Okay so I pulled it out of car to start rebuild and go thru it. All foreign to my eyes being new. Project so I have harness out and feeling like I had good pin out in front of me as well. Cake right! So cut off casing and what do I find under dash about half way from fuse box to ecu. Almost not quite but almost every + & ground to be melted shorted and took most the other signal wires with aka it's now good for the clips and what pins and colors I know are stock Witch isn't many lol so now I'm at a choosing point.
1, repair/rebuild stock converted.
2, convert entire car with obd1 da Harness. (Witch is a mysteries harness)
3,convert the 1 to a 0 using comnectors from shot one.

Want to be cost effective but also be right. I have one whole and a heap of odds and in obd1. Haven't another 0 or the cash to get one tho. I have the know how ase certified electrical. Have nessicary tools. Shrink solder wires ect. Just can't find reliable pins and diagrams. I re wired according to what seemed to be legit pin outs I had found. But recently discover from.pre owner. Their was a sub harness run for fuel, v and knock that's just missing all together. But origami also are still pinned into ecu clips so it must had be on the jumper they did the work. \

Really want to just plug this har es straight to ecu and swap to obd0 connectors and leave for the 1 components. Allready ready pulled apart so kinda interested in tossing in the entire 1 harness if possible. Without having to come across to many additional part, not sure need info then I can choose a path but need that info or a opinion

Coming along as well as could expect. I have now build 100% of this Harness my own. And decodes it would be a good idea to tuck and re route everything at same time. I'm now all signals grounds ect that go to bay are all in more than less on passenger side via old ac hole. Will be mounting batterie and fuse box in ac old location. Still figuring our heater re route piece have big open hole now. May just hardwire in obd1. If this can be proofed by a liable source 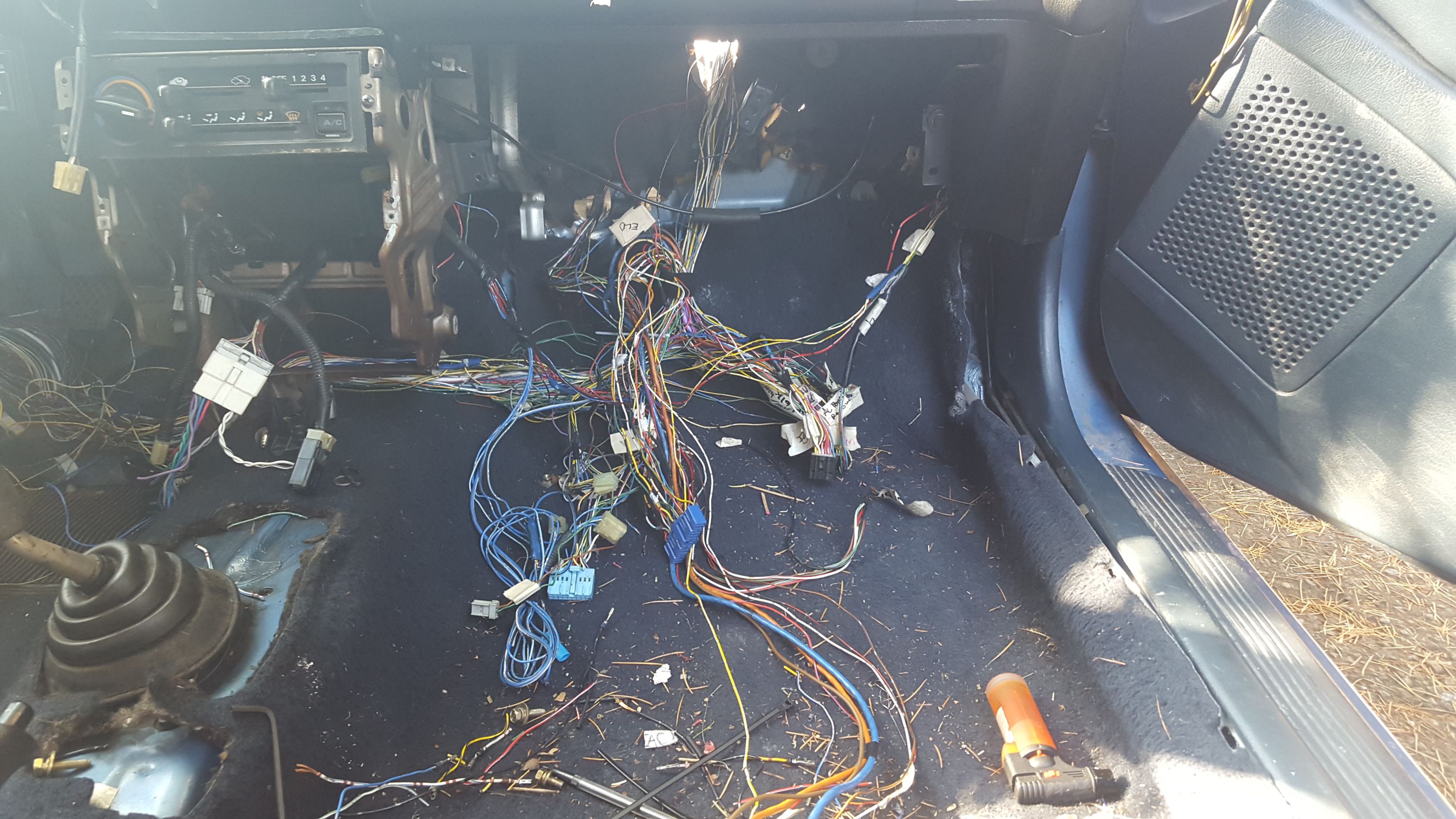 Moderator
VIP
Wow, that was a big job. I hope it all works out for you. After I hydrolocked my crx and we put a z6, I had a friend run some wires through the firewall. He must have hit some of the wires for the fuel pump when he did this. I struggled here and there to get it going and should have done what you did.

Threw in batterie for first time yesterday. I was expecting some issues, only problem so far is fuel pump not engaging and blinkers stuck on. I need to re run my whole hazard fuse circut anyway so not to worried about blinker. But if I'm wired in correctly for pump and it's not working is this because I used a ao7 fuse box? Virtualy the same just and integra doner I believe... it's smaller square shape like original. not the long one via da. If I use jumper wire I get activation on the pump just not throwing signal thru relay.

It's running like a top!!!
Had ran the relay wires wrong switched them to correct pins the blinker issue was funny.
The orange jumper that connects front rear and signal wires for t signals. I decided using a black one from integra would be a sweet idea... it's looks cool right. NOT the jumper pins inside go 3 3 4 black caps are opposite of orange ones. Who would known.. I do not have blinkers yet but faulty relay is that issue more than likely. But aside that we have a complete custom rewire dizzy build ecu chip wire tuck success story to be written up I wasn't intending to you but I periodically take pictures so I will be posting full story with pictures very soon will also be writing up diagram for my bay harness

VIP
Definitely a big project. Glad you managed your way through it all. EF converted isn't for the faint of heart and it seems like yours was even more of a challenge. Nice job.
You must log in or register to reply here.