Admin
VIP
every time i see this thread title i wonder if that's a saying or what?

did you mean crack pipe?

VIP
My friend found a Greddy H22 header and complete Megan exhaust for 80$ on craigslist... This will do much better than the eBay boltons he'd acquired previously.

VIP
Nice score! I would clean an inspect all welds on header (and exhaust) so they could be repaired before install (if needed).

VIP
Well. That was a fiasco of the century. Motor came out super easy. No real issues to speak of, broke one sensor on the intake manifold. Went to build the H23a and he had the wrong VC gasket, timing belt, distributor cap and rotor, header, etc. But, whatever, all stuff we can get from an auto parts store. So I popped the timing cover off and discovered the part of the block where the tensioner bolts to the block was snapped off. We discussed JB weld, or tapping the block even deeper and using a deeper bolt but ultimately we're gonna see if the company will honor their warantee. If they say we're SOL then we'll investigate. He said we may just bite the bullet and see if we can use the "Credit"? from the warantee and fill in the rest of the gap to land a Redtop H22a.

So the bolt-ons he got were for the accord motor so we're just gonna slap the car back together with the new fun bits, clutch kit, shorter geared tranny, so he has an improved car still.

VIP
Turns out the part that snapped off was actually part of the water pump so the motor is good.. that's a life saver. In any case we didn't have the right distributor or header so the swap couldn't go in this weekend.

So my schedule this friday/saturday/sunday

And he drove it away with a new clutch, header, exhaust and transmission that night. Got some videos up of the open Greddy header and then with the Megan exhaust, still F22b1 of course.

Only thing I hate about f/h cars are the non floating rotors soo 99% of the time they pulsate like crazy where they have been pad slapped 5 times , coming along nicely

VIP
Didn't take any pictures but I sold him some spare DC seats that match his interior. Had to do some modification to get the rails to fit, and even had to weld a bit. I love fabrication, and it bolts up and sits in the exact same spot as the original. The drivers seat is electric and it's busted so we're gonna try to find a LX rail/seat for me to fit to the DC.


For future reference it was actually not that hard... Maybe 2 hours invested including figuring out how to do it.
Removal plastic covers from both seats (phillips screws)
Unbolt DC sliders. The side with the seatbelt buckle can come all the way off, and just take the actual slider off the other side. Should be some 12mm and 14mm bolts. (won't be needing these rails any more)
Repeat above process on the CD seats, only instead of 12mm and 14mm bolts there will be 2 hot rivets (grind the heads off these and they will come off) and a 10mm nut. (remember you can leave the rails on the side with the seatbelt buckle)
Secure the CD5 seatbelt buckle and rail to the DC seat at TWO points. The 12mm nut going to the back of the chair, and the 14mm bolt at the front. Using your tool of choice (i used a reamer) widen the middle hole so it lines up with the hole on the DC seat. Use washers to set the gap (don't just torque a bolt in there and bend the rail) and insert the 14mm bolt.

This is where it gets fun.
Before you go to install the rail on the recliner side, mark where you will be welding but lining up like below and clean those spots to bare metal so the welds will take.
To install the rail on the recliner side line up the middle stud on the rail with the middle hole on the DC seat. Using a pair of vice grips clamp it in place so it's sitting straight and torque down the 10mm nut on the middle stud. You WILL NOT have access to the rear hole to weld. We will come back to this. Leaving the vice grip in place, you will see the holes where the old slider had bolts coming through. You will treat the front one like a spot weld. The rear one you have to physically weld the rails to each other from the side. Once the rail is secured in all 3 points (front spot weld, middle nut, rear side weld) i suggest tapping it with a hammer to check the strength of your welds.

Installing the seats...
Make sure the sliders are properly lined up and set them in the car. The holes will be close but ultimately not line up. Again, using a reamer or your widening tool of choice widen the holes LENGTHWISE until both rails line up evenly. You should have to take out a fair amount of metal but not a lot. If you get into the factory bends on the sides you did something wrong. Bolt down the front so the seat is sitting straight and repeat the process on the rear.

Ta-da! When I get the LX rails I'll document it with pictures. I had to figure this out as I went because I couldn't find a DC into CD chassis seat swap writeup so if anyone else wants to do it at least they'll have an idea of what is required.

VIP
Back at it on this project. We set February 3rd as the weekend to make it happen. I reset the timing today, in preperation for the timing belt and stuff but I'm going to suggest he do a auto-to-manual tensioner conversion

He got a water pump/timing belt kit for a USDM h23 (rookie mistake, thinking H23a1 = H23 bluetop) so I'm thinking use the manual pulleys for the tensioner conversion and get a proper H22 water pump and timing belt.

VIP
I wired up the swap, it's not overly difficult either.

Using a distributor from a 92-95 Prelude VTEC (H22 model)
Engine harness from a 1996 Accord EX automatic (same year/model as his car)
I am using the bluetop oil pressure sensor (yellow/red wire on the bottom of the harness that runs underneath the intake manifold)
I spliced in the plugs for the OBD2 distributors to use the ones that came with the swap
The one difficult thing was the famed IACV relocation. I opened up the loom and rerouted it to come out where the injector plugs are and resealed the harness without having to extend the plug.
And by some miracle the harness plugged right into the distributor, so everything looks ready to go.

VIP
Old motor is out... new motor is mostly built. Its coming along nicely. 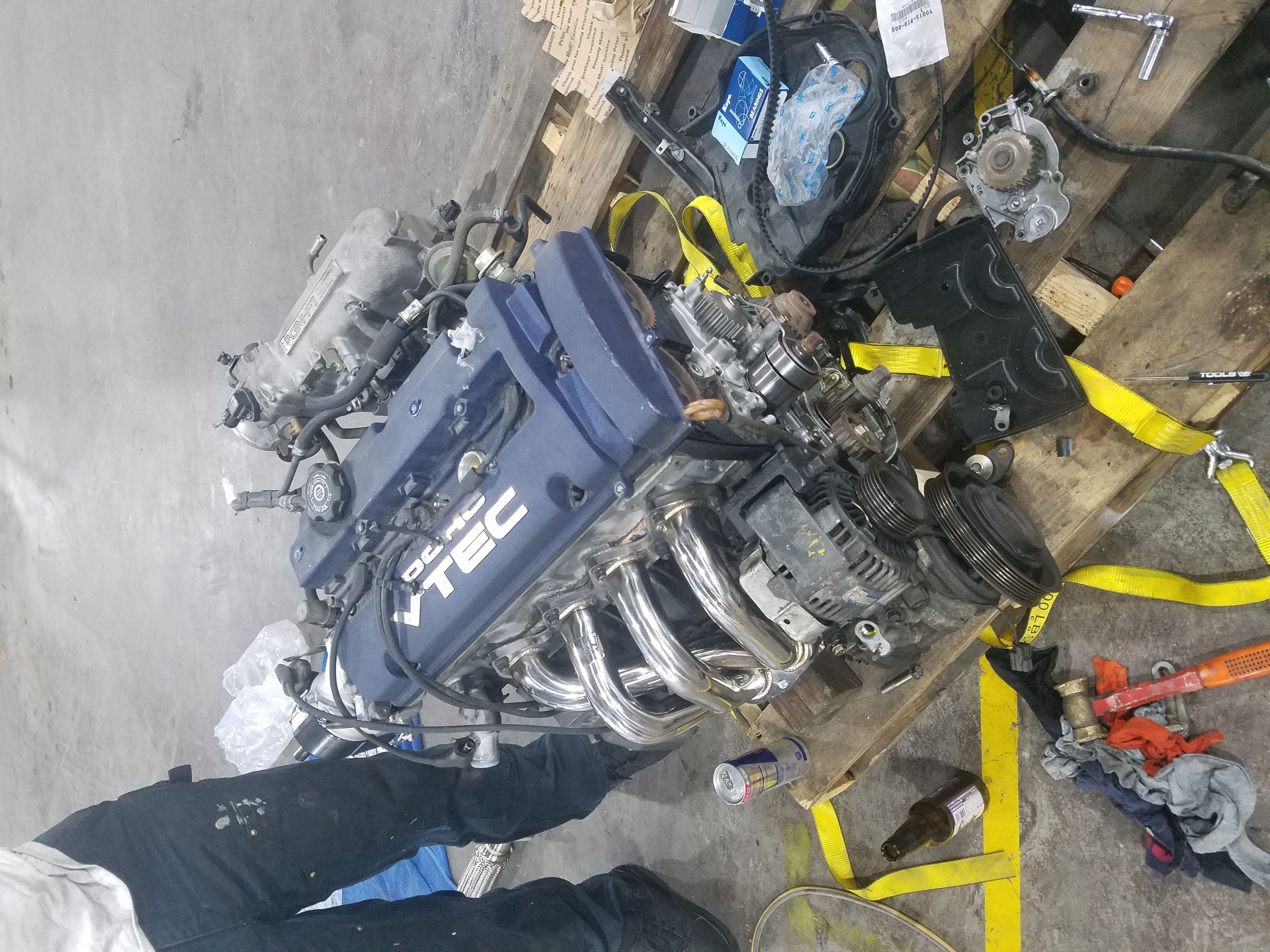 VIP
So we worked till 1230 last night, slept till 8, then worked till 1230 tonight. I basically screwed up but I think we can recover well enough. I had him get a distributor with an external coil setup so we just need to find an external coil and we should be good to go. Otherwise the motor is in. Unfortunately we do not have a VTEC solenoid with a pressure switch and therefore he won't have VTEC until he does get one.

Interesting note for the swap, I'm not certain if this is unique to the H23a bluetop because it is out of an Accord (98-02 style) but I'd read that with any H swap into a CD chassis you have to get a 92-96 prelude drivers side mount and modify it. We ended up being able to use the original mount with the H23a bracket, and despite not having enough thread and having to shim the stud, it lined up nice and clean and the motor sits straight.

I'll be happy when I hear it run tomorrow and see him drive away in it lol. Lets hope for the best. More pictures and details of the steps we took coming along

VIP
Update: our ghetto-rigged external coil system did not work so we're now waiting on the correct distributor to get here Thursday.

VIP
So its having trouble idling. At startup its around 600-700 and when it gets closer to operation temperature it falls closer to the 500-600 range which causes the motor to shudder. It has a brand new IACV and theres no visible vacuum leaks so i'm a little confused. Any thoughts? I feel like the fact it gets worse as it warms up should be a tell for something
You must log in or register to reply here.