When doing an HDR photo, why take 3 or 5 pictures when you can take 1 photo and use a computer with photoshop to under/over expose the photo? I'm trying to find some info online, but I can't get any answers.

VIP
over/underexposing doesnt give the same effect as an HDR photo..

eg6sir said:
over/underexposing doesnt give the same effect as an HDR photo..
Click to expand...

but isnt' manually taking 5 photos with adjusting the range going to give me the same photos and using 1 photo and adjusting 4 more versions of it? then i can combine them to make an hdr photo. i wouldn't have to worry about motion in the picture or using a tripod.

VIP
i've tried it that way... doesnt give it the same effect.. its best to take 3 pictures... hell, check out ebay.. they have tripods for under $20

the cost of the tripod isn't a big deal. i'm just lazy and want to take several photos instead of having to setup and take 5 manually, then move on.

i was just trying to figure out why manually adjusting the lighting with photoshop is a bad option.

VIP
try it out... you may have a better outcome than i did

95b16coupe said:
When doing an HDR photo, why take 3 or 5 pictures when you can take 1 photo and use a computer with photoshop to under/over expose the photo? I'm trying to find some info online, but I can't get any answers.
Click to expand...

Photoshop can bring out details that are already in a picture, but different-exposed photos each contain information that just doesn't exist in the others.

My very first HDR picture ever is a perfect example:

Think about a dark room with a brightly lit window. If you take a picture that's properly exposed for the window, you'll have an underexposed room. Photoshop can bring some of that out, but there's simply less information there than there would have been if it were exposed properly.

Conversely, if you expose for the room, the window will be completely washed out. No amount of photoshop work can bring back what isn't there; it's simply all white.

You can in fact 'simulate' an HDR effect by adjusting the exposure of a single image multiple times and combining them as you would separate exposures. It will look markedly different than an actual multi-exposure HDR though, since it really doesn't contain any more information than the original image did.

95b16coupe said:
i'm just lazy and want to take several photos instead of having to setup and take 5 manually, then move on.
Click to expand...

That's what the 'bracketing' function of the camera is for. Hit the shutter once, and the camera automatically takes all of your exposures for you. I happened to pick a camera that didn't have bracketing (Nikon D40x) and have to do it manually, but almost all other pro-sumer level DSLRs have a bracketing function.

since the photo may be too dark to begin with, you can't really brighten it up because there is no data. but if it's overexposed, you will have too much "white" and wont have any data.

so unless you can take a miraculously perfect picture, you wont be able to hdr one photo.

VIP
what does hdr mean?

In image processing, computer graphics, and photography, high dynamic range imaging (HDRI or just HDR) is a set of techniques that allows a greater dynamic range of luminances between light and dark areas of a scene than normal digital imaging techniques. The intention of HDRI is to accurately represent the wide range of intensity levels found in real scenes ranging from direct sunlight to shadows.
High dynamic range imaging was originally developed in the 1930s and 1940s by Charles Wyckoff. Wyckoff's detailed pictures of nuclear explosions appeared on the cover of Life magazine in the mid 1940s. The process of tone mapping together with bracketed exposures of normal digital images, giving the end result a high, often exaggerated dynamic range, was first reported in 1993[1], and resulted in a mathematical theory of differently exposed pictures of the same subject matter that was published in 1995[2]. In 1997 this technique of combining several differently exposed images to produce a single HDR image was presented to the computer graphics community by Paul Debevec.
This method was developed to produce a high dynamic range image from a set of photographs taken with a range of exposures. With the rising popularity of digital cameras and easy-to-use desktop software, the term HDR is now popularly used[3] to refer to this process. This composite technique is different from (and may be of lesser or greater quality than) the production of an image from a single exposure of a sensor that has a native high dynamic range. Tone mapping is also used to display HDR images on devices with a low native dynamic range, such as a computer screen.
Click to expand...


Tone-mapped image made from nine exposures of TrenčÃ­n, Slovakia at night. 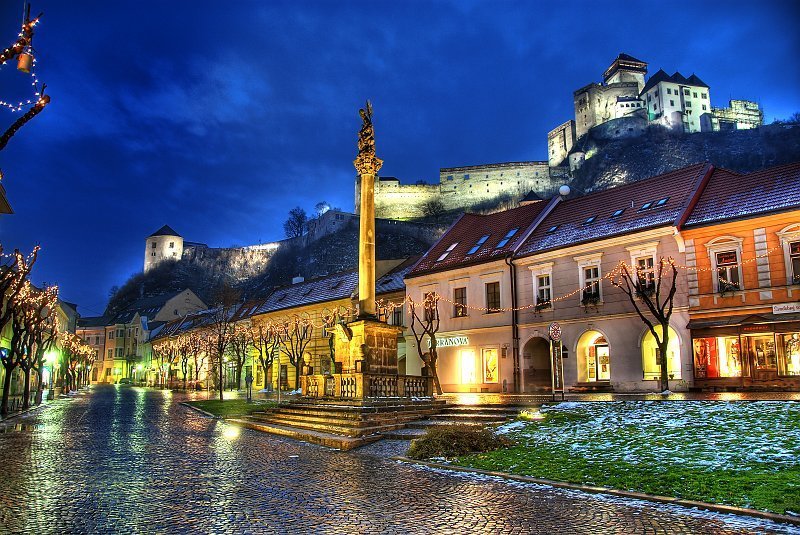 since the photo may be too dark to begin with, you can't really brighten it up because there is no data. but if it's overexposed, you will have too much "white" and wont have any data.
Click to expand...


95b16coupe said:
so unless you can take a miraculously perfect picture, you wont be able to hdr one photo.
Click to expand...

Moreso than that, it's physically impossible to gather the correct amount of light with current SLR camera technology. The 'range' of the camera just isn't there. Technology exists that it can be done in a single shot, but only with special equipment in the 6-figure range. Only a matter of time before that comes down though.

eg6sir said:
that 9 photo one makes me wanna try one of those
Click to expand...

it helps to be good with photoshop. it's not just taking 9 pictures and layering them. that guy is definitely a professional.

VIP
photomatix does it for you..

eg6sir said:
photomatix does it for you..
Click to expand...

it only does part of it. it just layers it for you. ideally, you would adjust the lighting and color of each exposure, then layer it. or you would want to layer it, then adjust the colors manually.

if it was just about taking 9 photos and slapping it onto photomatix, there would be a lot more hdr photos.
You must log in or register to reply here.