Figured since I've been away for a while, and I've already posted about my car, I might as well post some pictures. Has some cosmetic issues, but I couldn't beat it.

Bought the car off the original owner, who included a dictionary sized folder of all the maintenance records from the dealership. 62k original miles. D16Y7, completely unmolested in any way. Only downfall about the car itself, is it had manual everything, and no a/c, which wasn't a big deal to me at all. The only bad thing was that the clear was coming off a little on the rear and front bumpers, and someone backed into him in a parking lot, and cracked the front bumper, grill, and put a small dent in his hood. Didn't affect his driving, so he didn't care. I have a primer SI bumper, and a primer hood, just waiting to go on until after winter, when the nickle sized rust on the rear panel gets taken care of and the entire car gets a fresh coat of black, including the hood and bumper. Still need to buy a grill, and probably an EX tranny.

I did, however and just for shits and giggles since I was replacing it anyway, turn the dented hood into a chalkboard. It's fun in the summer.

I've also swapped to a Y8 Intake manifold, and a Megan full exhast. I'm a mechanic at a tire shop, and got a deal on some silver 16's, I'd just like to drop it a little now. Maybe an inch or two. Windows were just tinted, 5% in the rear two and the hatch, 15% in the front.

manual everything isn't necessarily a bad thing, my drivers window falls off every time it goes down, and power steering is overrated, I've actuallly been considering doing a manual rack in my hx. Also considered deleting the non functioning AC, for reduced weight, drag, increased economy.

Anyone know if the 92-95 13" steelies will clear the calipers and rotors on this thing? The wheels are about an hour away, and I'd like to know my chances of them fitting before I make the drive. They're for snows.

They should clear. Brake system was identical from EF-EK.

If its an original Y7, its an EX. Pretty sure the rotors were all the same size, just the EX had rear discs. I posted a link to a write up a while ago taking about this...

Got this for you.

And. To post whore. It looks like I was wrong about the EX brakes being the same.

The car is a dx, for what that's worth..idk exactly what the difference in size between an lx and dx are.

I know on an EG, my stock EX breaks didn't fit my 13in rims back when I got them... They only fit my CX / DX break rotors / calipers

Are the dx brakes/calipers on an eg the same as an ek dx?

Update: put the si hood on, and realized that my rad core support is pushed in on my passenger side roughly 3/4", which is getting pulled sometime this week. Got my hands on an armrest console since mine came without one, and sent my wheels for some new color: Snap-On electric Orange. Of course we will have some haters, but its the same color as my toolbox, 1/2" gun, 3/8" gun, and I love it. Pictures will be posted as available.

daveholiday said:
Update: put the si hood on, and realized that my rad core support is pushed in on my passenger side roughly 3/4", which is getting pulled sometime this week. Got my hands on an armrest console since mine came without one, and sent my wheels for some new color: Snap-On electric Orange. Of course we will have some haters, but its the same color as my toolbox, 1/2" gun, 3/8" gun, and I love it. Pictures will be posted as available.
Click to expand...

Im interested to see the wheels on the car! I am a fan of funky wheel colors personally

Thanks! I'm pretty stoked about them

Just got instagram, wanted to see what the hype was about. 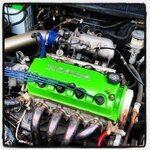 Got the new hood, bumper, and grill in.