Hey guys, I'm just going to copy/paste this from another forum but thought you may be interested.

I haven't done any aesthetic mods and probably never will (other than the wheels). Only interested in making it fast.

I previously had a 1991 black CRX Si with a Z6 block and Y8 head. I paid $2000 for it, it didn't run that great, I fixed the timing on the chipped P28 so it was correct for the Y8 cam. Planned to do a budget turbo setup on it, however one shitty day coming home from work, a dump truck from a side street decided to merge in front of me. It had only reached 5-15mph while I was going the posted 55-60mph. Did not have enough room to slow down, so tried to go around it, car started sliding towards a cement barrier, I tried to correct and the car began sliding towards the dump truck. Woke up in the hospital hours later getting stitches in my face/head. 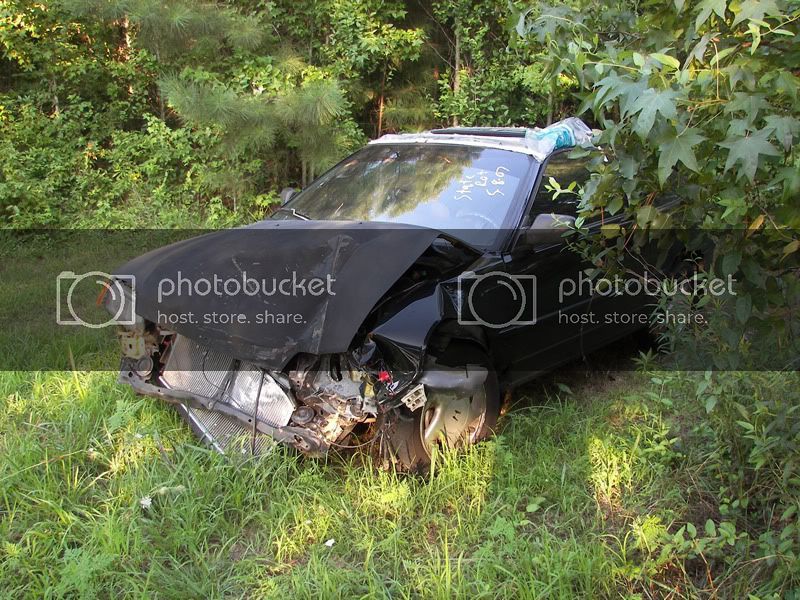 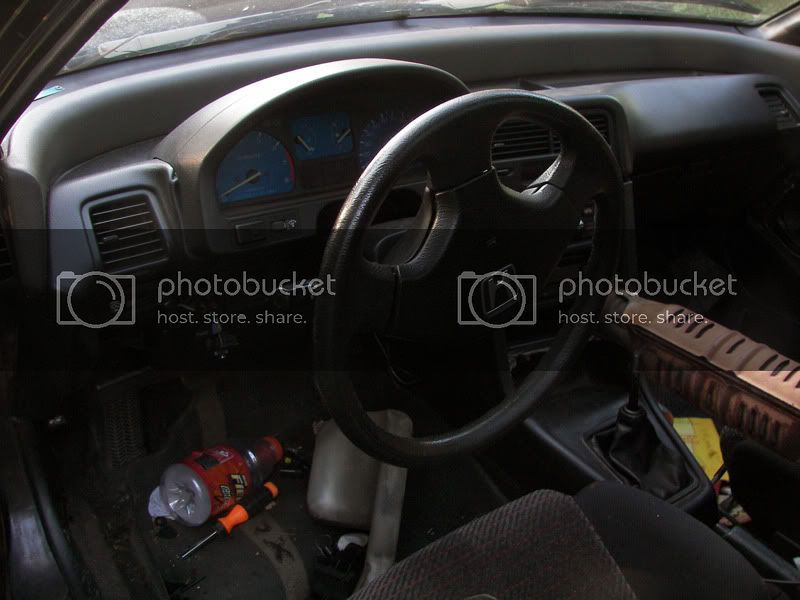 Here you can see how the interior completely warped. Steering wheel was bent, and you can see on the dashboard where the cluster hood is that it's wrinkled from being bent. A lot of the plastic pieces popped out. The seat was even bent severely. 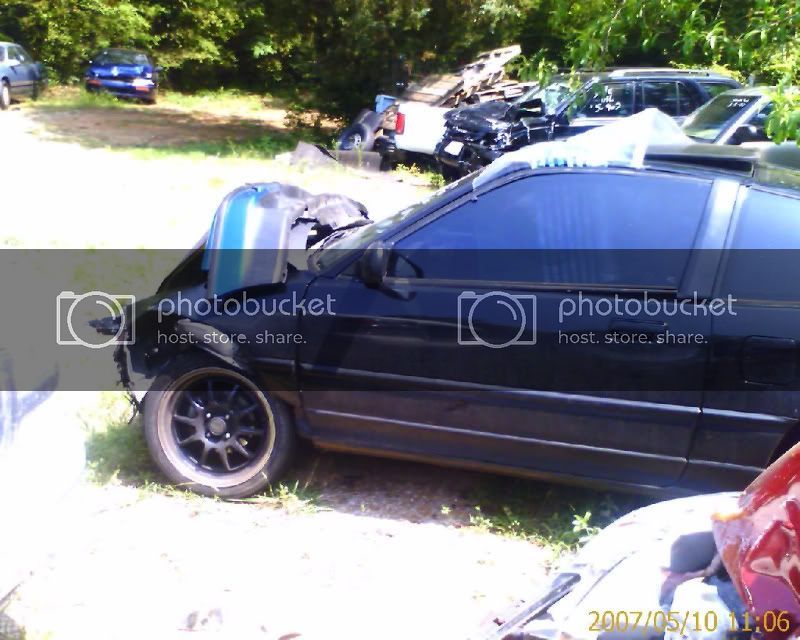 The whole drivetrain was pushed back into the firewall. There were crinkles all over the body like it was an aluminum can

I have to say that I am very satisfied how it all turned out. I just had 34 stitches on my face. Walked with a limp for a month. There was actually a cut on my eyelid, and I'm very fortunate that it wasn't a few millimeters deeper because I am a fan of having vision. I had no seatbelt (stupid) so think I was launched up, across the steering wheel, and into the rear view mirror. I had a cut vertically across my lips, across my left eye, and from my forehead to the top of my head.

After that one, I had to have another one. A good friend purchased one a few weeks earlier for his girlfriend, then after my wreck decided it wasn't quite safe enough for her, so sold it to me. So ended up with a 1990 Y49 CRX Si.

Here's the only picture I have of it:

It had around 240k miles on it, and burned oil, so I started collecting parts for a B-swap. In March I dropped off the head/block at the machine shop to have it taken care of, and didn't get it back until September... The day I moved to my apartment, the pressure plate decided to die and I didn't have a vehicle. Since I couldn't work on it at the apartment, I towed it to a friend's house half an hour away. Didn't have a vehicle to get there and work on it, and soon after it was Winter and way too cold...so haven't really got to do any work until February/March.

I went with the Suja 1 Motoring cable/hydro conversion because it COMPLETELY replaces the cable by mounting a master cylinder on the pedal. Your air vents to the driver side won't fit without some rigging, but they never worked well for me anyway so just removed them.

Dash off and conversion installed: 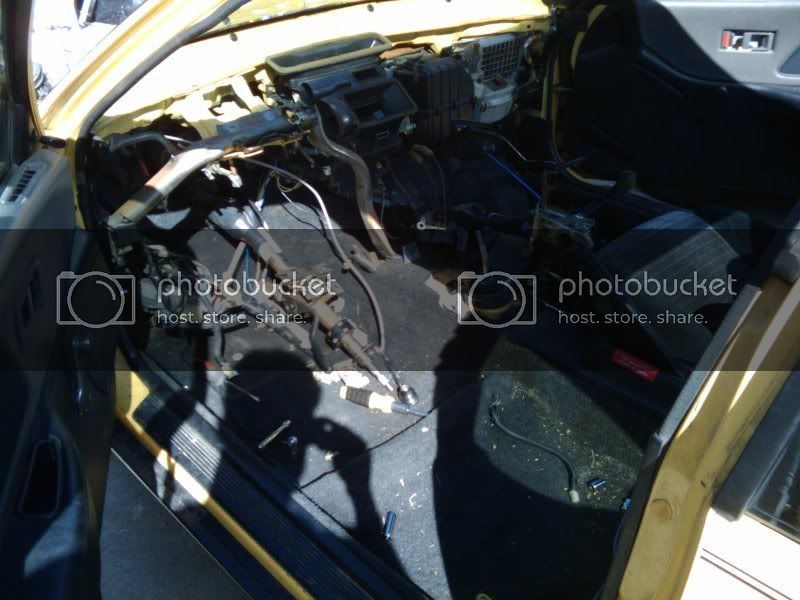 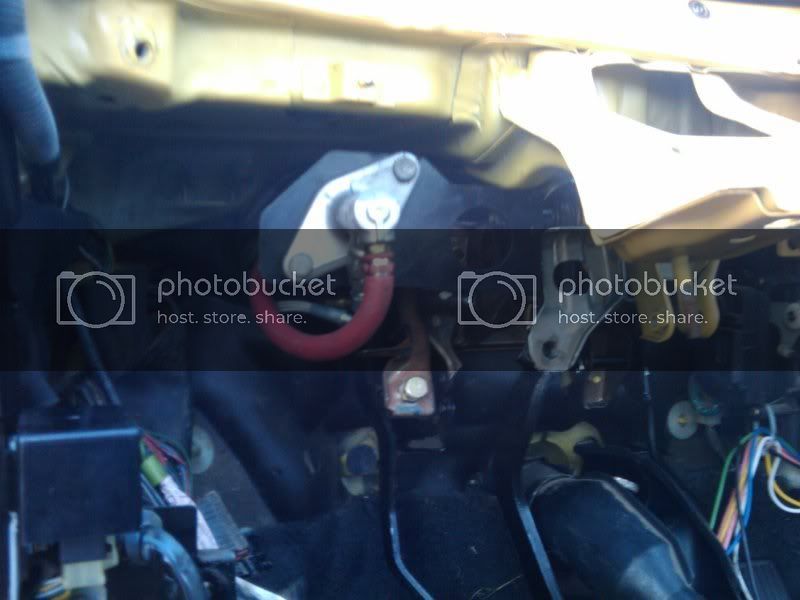 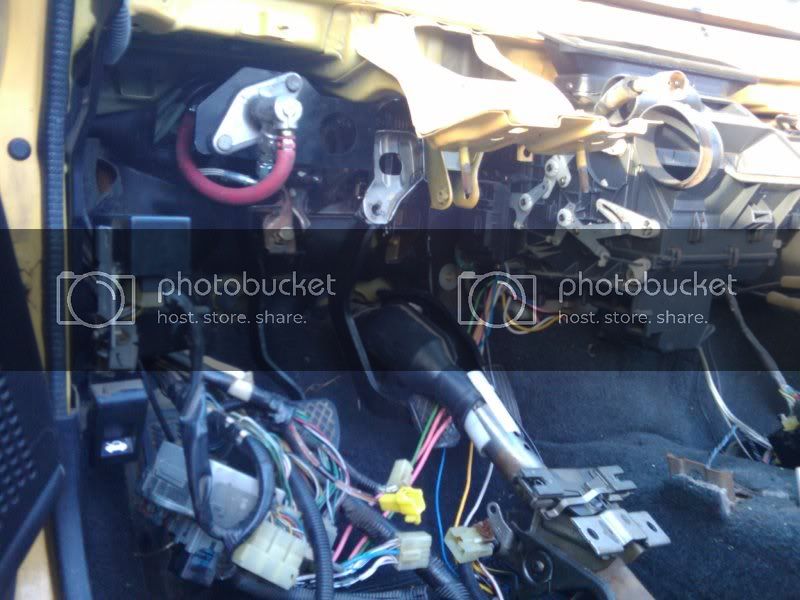 The only modifications you have to do is a getting a washer welded to the "clip" on the clutch pedal. A local shop did that for me for $10. Make sure you use hose made for brake fluid. 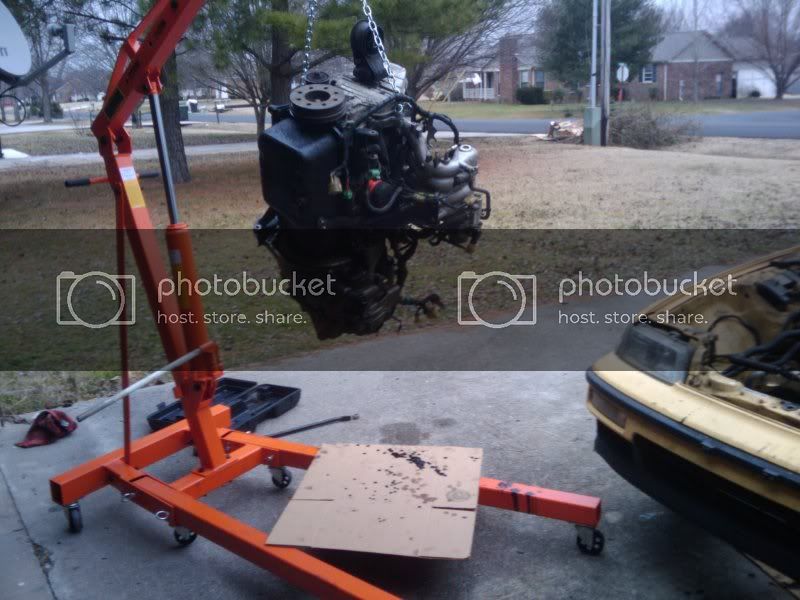 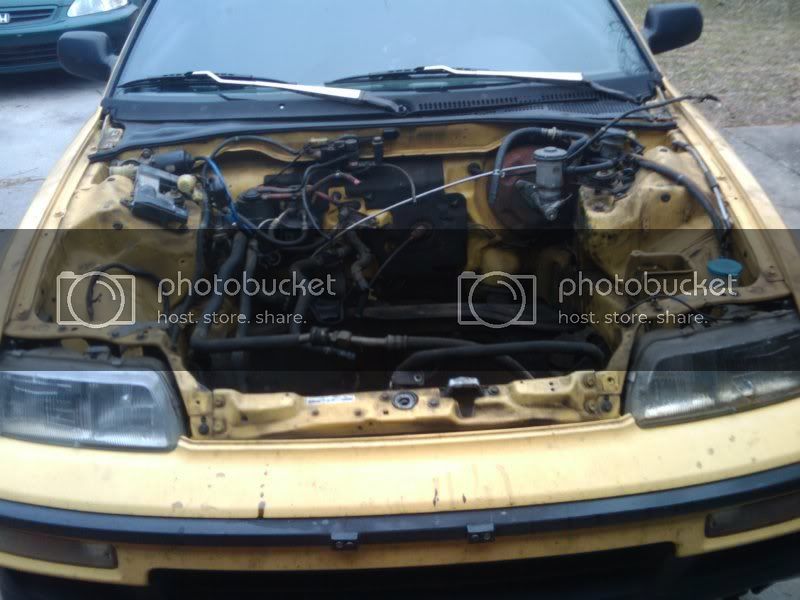 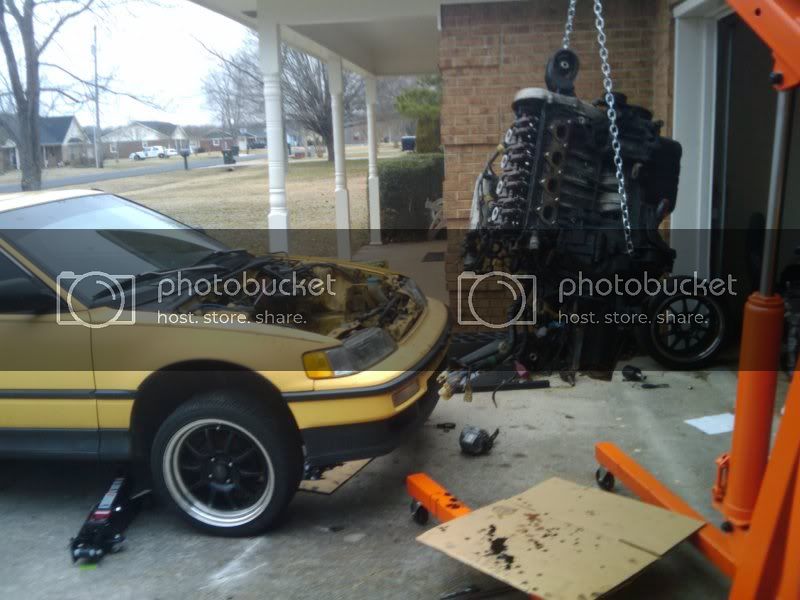 Then I installed the JK Motorsports traction bar that I've had sitting around for years while it was all out. 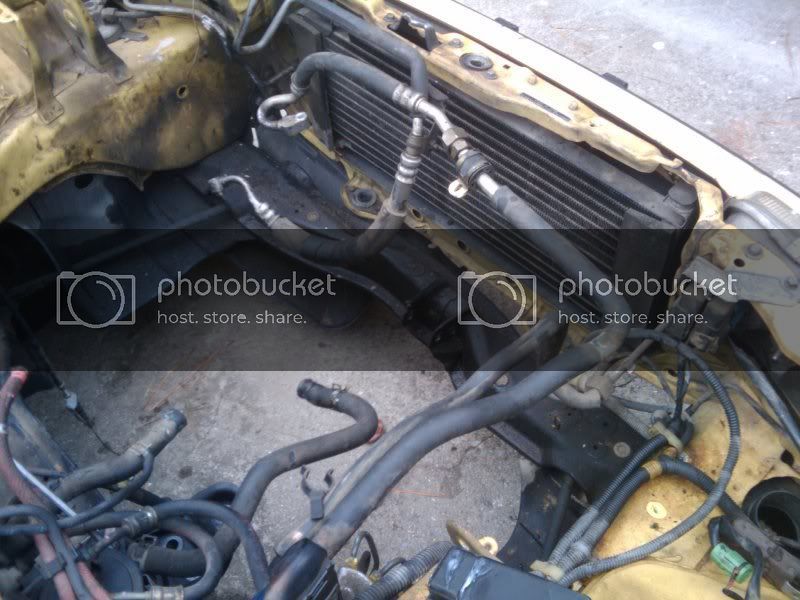 And here's how much space the JK Motorsports one frees up: 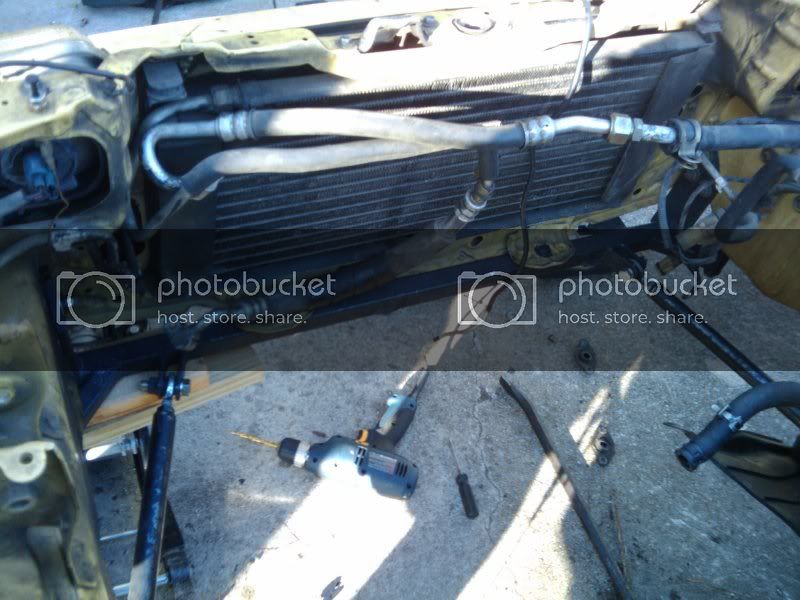 I did run into a couple problems/delays when trying to get the engine in. First of all, I had cable motor mounts. I didn't know there was a difference, but now I do. Also, the transmission bracket from the 90-93 teg had holes that were too small. I've heard this is because it was for a cable transmission.

Fortunately, I had access to a classic piece of made-in-USA machinery to bore out the holes on the bracket: 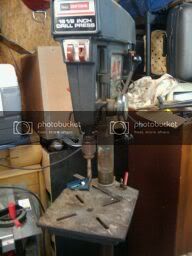 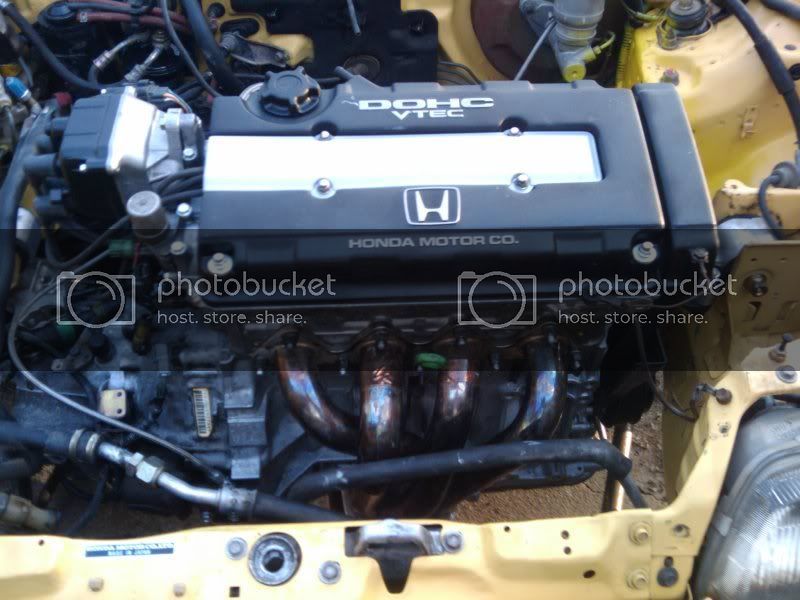 Here's the first startup. It sounds loud because the header didn't reach the exhaust. The video is crappy quality because it was recorded with a cellphone. It is not my first time driving a manual transmission; my seat was not bolted down and the clutch was like a light switch. Every time the clutch grabbed it would knock the seat back and disengage the clutch again
YouTube - Jorsher LS/Vtec CRX Start Up

First time down the road. The neighbors loved the loud noise late at night, and friends said they could hear it all the way down the road.
YouTube - Jorsher LS/Vtec CRX First Drive

Went back home and parked it for the night, then went with some friends to drink. Came back the next day to change the oil, bolt the hood on, and bolt the seat down. When I got under the car, I noticed oil sprayed all over the back of the engine and firewall. When i drained the oil, only 1qt came out. Refilled it, started the car, and a few seconds later oil started overflowing from the radiator.

Tore the engine down and found this crack in cylinder 3:

Also found out where the head was tapped for vtec there was a small crack. Plugged it up and put it all back together. I was hoping the block would last a little while since the crack was only through the outer sleeve. Started the car and noticed oil coming out of the ebay vtec feed line. Had a new one made, put it on, and started the car again. The leak was fixed but it idled rough and ignition timing could not be set even though mechanical timing was perfect. The plugs kept fouling, and there was oil/coolant/something getting into the combustion chambers, so at this point I just tore it back out.

Decided to start completely fresh, and ordered the B18C5 head and B18B block. Also purchased some new Wiseco rings, some new bearings since the ones I had were scarred by the coolant, a new headgasket, new intake manifold gasket, a catch can, and an OEM N1 crank pulley.

Here is a comparison of a B18B pulley to the N1 pulley:

My B18B pulley had a couple pieces chipped off which would supposedly throw off the balance, but I was more worried about it eating up the belt where it was chipped. Since I removed AC to make room for turbo, and don't have power steering, the N1 pulley is perfect and gives me ample room to work. As an added bonus, it seems about 1/3 of the weight.

Since that engine failure, have completely cleaned the car. The engine bay is clean, under the hood is clean, door jambs, and around the hatch. Also sealed all the cracks with RTV so it would stop leaking.

Today I finished the battery relocation since the battery was just sitting on the spare tire. I used an Odyssey PC680 which is a sealed dry-cell battery with plenty of CCAs and can handle up to 400 complete discharges. Not only is it cheaper, smaller, and lighter than an Optima battery, but it's made by a company that relies on building a good product to make sales rather than marketing like some others. *cough* Optima *cough*

I bought a distribution block from a car-audio store. It has one "input" and three "outputs." I connected the starter, and the under-hood fusebox to the outputs, and ran some thick speaker wire from the distribution block through the firewall, under the carpet by the passenger seat (there's a bunch of clips that were unused that the cable fit into PERFECTLY), and under the compartments.

I installed it in the rear compartment behind the passenger seat. Almost a perfect fit:

I ran the ground cable to the spare tire holding bolt. It's strong and I didn't have to drill additional holes into the chassis or risk puncturing the gas tank. You cannot even tell it's their with the cover on it.

Future plans include a T3/T04e .60 trim with a stage 5 turbine, which should have positive pressure at around 2500rpm and build up to 475-500hp by redline. Of course, I will need 3" exhaust to allow for it, along with the other usual turbo goodies. Will use a P28 with NepTune and plan to have it tuned by J. Davis. 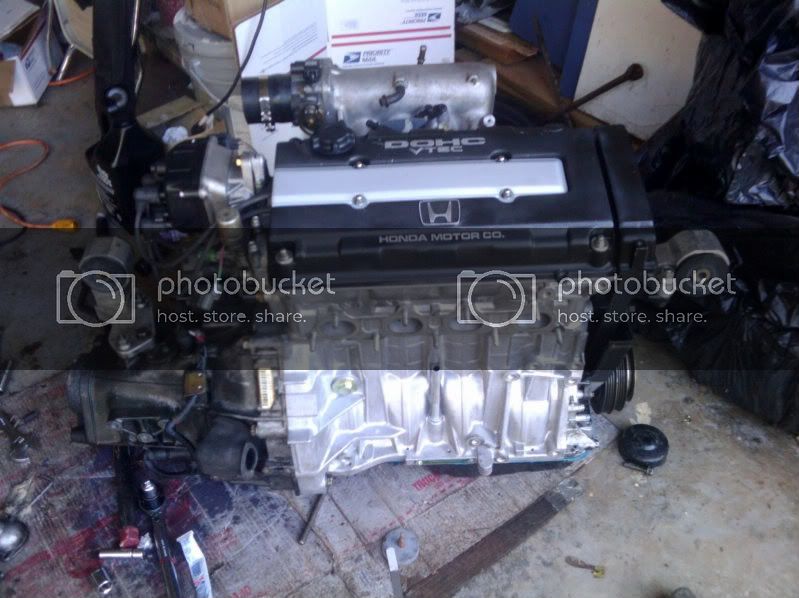 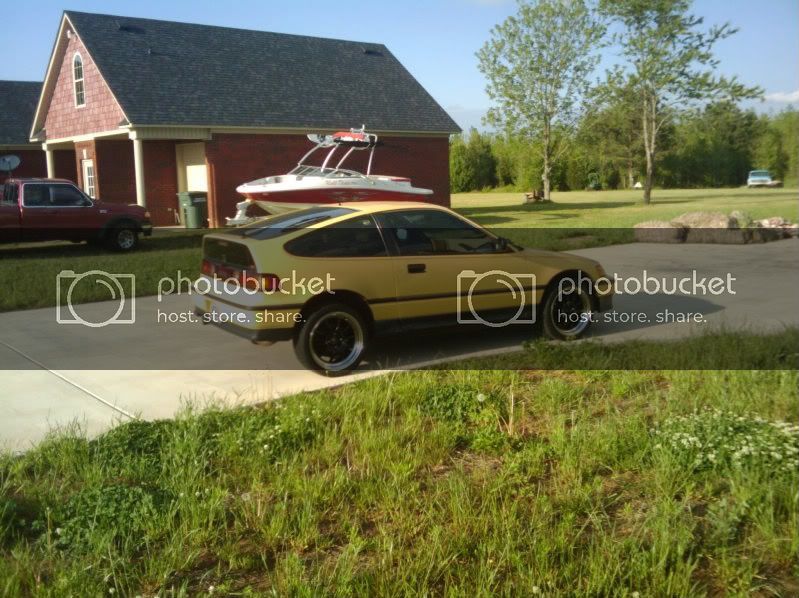 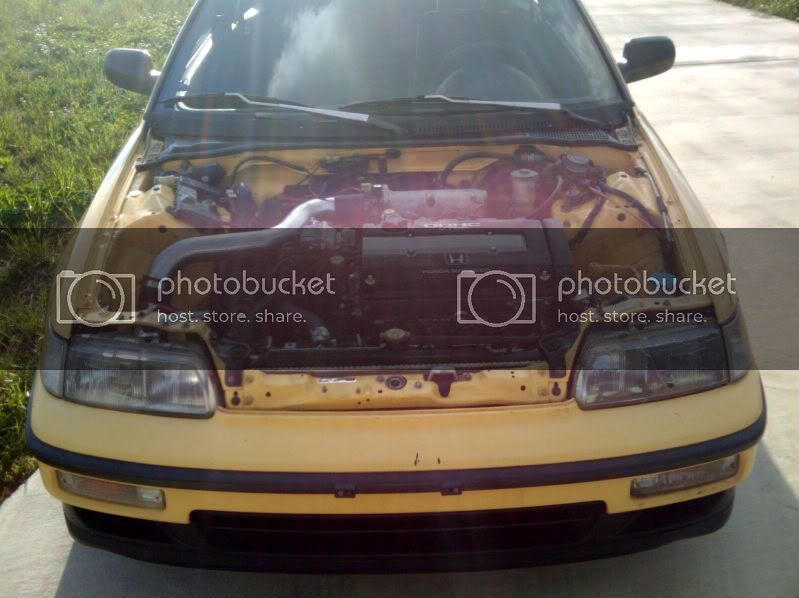 I plan to go with a T3/T04e .60 trim with stage 5 turbine. Just started working again after 6 months of unemployment so may not be til later this year...

VIP
Nice. Most people would have given up after the first motor crapped out.

Sorry for your loss, do you still have the black one and hows the pass. fender, it looks pretty good

Moderator
VIP
good lookin build. sounds like youve had your share of problems though haha, reminds me of my build.. always fighting me.
J

SlushboxTeggy - If it wasn't my only vehicle I probably would have, or at least put it off for a while. Used to have 3 Hondas at once, but this is my only transportation so had to get it running. Especially after how much money I've dumped into it

92stoccord - Nope, took off what I could quickly and it went to the scrapper. Wish I had more time with it to pull things off

Matts96HB - Yup, ran into a lot of issues that kept delaying it, but glad it's finally (almost) done. Feels so great to finally be at the end after all the problems and delays.

Fun little ride. I considered a B20 but didn't want to pay to have it sleeved. If I blow this engine, that's what I'll do.

^^
When the video first starts your gas gauge is right about half tank. You hit 8k and it slowly decreases lol.

Haha yeah, first few times I drove it I was wondering how my gas was disappearing so fast

Will try to get a better one from a dead stop to about 80ish when I have a chance.

New vid with speedo and no crap music.
You must log in or register to reply here.