No one posted about Kobe?

VIP
RIP.
Not much of a basketball fan myself, but it seems to be a big deal.

VIP
if it was you or me it wouldn't even be on the news.

and for that point, personally i don't care.

Was it an awful tragedy for his family who's now missing a husband/father and a child? Yes.

Was it an awful loss of life for everyone else on board the helicopter? Yes.

Was Kobe one of the greatest NBA players of all time? Yes, most definitely.

Was he maybe a rapist? Maybe, yeah.

Was he maybe not a rapist? Maybe, yeah.

I dunno. Like recked, I've never been much of a basketball fan, so it's probably missing a lot of meaning for me personally. I understand how much LA loved the guy too, so I can understand why people are taking it so hard but again...I'm not feeling it personally.

Moderator
VIP
If it wasn't for overhearing other people talking about it, I wouldn't have even known about it.

VIP
He seemed like a pretty good dude compared to some of the other athletes/celebrities we hear about in this day and age.

Did he get drunk and buttsecks someone who may not have been totally into it? Most likely.

Did she ask that charges not be pressed in exchange for a monetary payout? Most definitely.

Aside from that it's tragic for everyone involved and their families. A lot of kids left without a parent.

D16Civic said:
He seemed like a pretty good dude compared to some of the other athletes/celebrities we hear about in this day and age.

Did he get drunk and buttsecks someone who may not have been totally into it? Most likely.

Did she ask that charges not be pressed in exchange for a monetary payout? Most definitely.

Aside from that it's tragic for everyone involved and their families. A lot of kids left without a parent.
Click to expand...

Yep, exactly. The truth of what happened at that hotel probably lies somewhere in between both parties' official stories. And like you said, he seemed like a fairly stand-up guy aside from that incident, which is more than can be said for a lot celebrities who tend towards consistent, life long ass-holery.

Can't even imagine what the families are feeling. Bad enough to lose a parent or a child to some tragic accident but both at the same time? Yikes.

Admin
VIP
Helicopters have killed so many famous people.

Briansol said:
Helicopters have killed so many famous people.
Click to expand...

VIP
I for one took the news pretty hard, as did my Son.

Magic Johnson was the player I started watching when I first got into basketball but not even 2 years into my love for basketball, he was diagnosed with HIV and out of the league soon after. I was in the 3rd grade.

Then when I was in the 8th grade, The Lakers finally got the franchise Savior. A Kid named Kobe Bryant. A Kid who was only 5 years older than me, already in the league. He was my hero.

At the mid-way point of his career, I had my Son. By the time my Son was really into basketball, Kobe was in his 15th year. My Son enjoyed watching him in his final 5 years. My son has been on a lot of basketball teams the last 9 years. Always wore #24. He decided to start playing Football and wanted to be a Receiver but when he found out he couldn't wear #24, he switched to Cornerback just so he was eligible to wear #24, and he got it.

What also hit me hard, is I was starting to watch his Daughter play Basketball and excel at the fastest rate i've ever seen in a kid. Although my oldest Daughter, who is only a year younger than his Daughter that was on the Helicopter with him, doesn't play Basketball, I watch her aspire to be a Gymnast and the thought of her not being able to do what she loves is devastating.

Just wanted to share my thoughts on it. I understand not everyone has a connection to Kobe. The same way I don't have a connection to some musicians and/or actors that have passed, that a lot of others do.
Last edited: Feb 16, 2020

Moderator
VIP
For me, one picture kinda defines the thoughts going through my head when I saw the story on twitter. 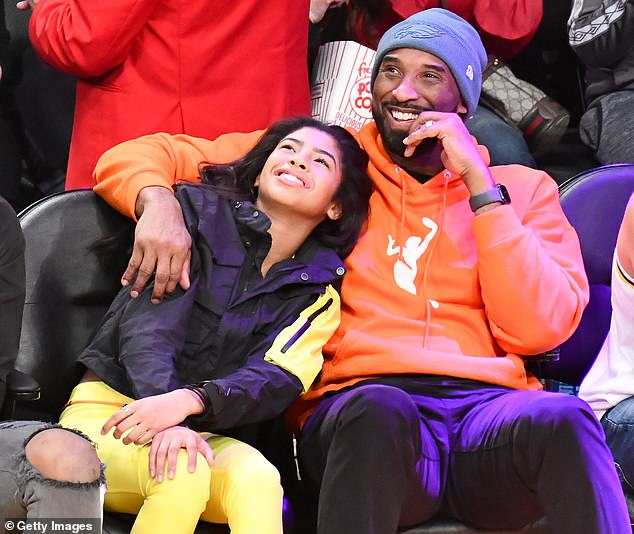 I'd only been kinda following the mavericks, and that image just stuck with me. So when I read the news, it destroyed me, because it wasn't the trophies, or the scandals, it was that moment with his daughter that defined the man in my eyes. Even before that moment, he never missed an opportunity to talk about his kids in an interview. No matter what else you say about the dude, that's the part I'll remember.

The one positive I could take away from that tragedy is that when I take my little girl to the park, I'm no longer the only dad in a sea of moms. Still true even this week. I'm taking it to mean that a lot of people took that positive example he set on how to be a good father even when you're "busy". Even I've been making sure to spend more time with my kiddo than before, and I'm not gonna lie, that picture, followed by the crash, is a big reason why.
You must log in or register to reply here.
Share:
Facebook Twitter Reddit Pinterest WhatsApp Email Link
Top