Admin
VIP
I was out late last night jamming with some buddies. drank too much for a weekday... dehydrated, headache, and it's pouring rain.

So, I'm in the middle lane driving, cars on both sides of me.
suddenly, there's a ratchet strap or something in the road.
no where to swerve... yup, it's inevitable.... BOOM


and then the low air light comes on

slow down, limp it to the next exit because i'm not stopping on a no shoulder highway in the pouring rain

ok... i got mechx gloves and a jacket, i can take care of it. The rain is more of a drizzle now...

pop open the trunk to get the spare and tools out, remove the carpeting, and it's full of water.
wtf.
So, now i need to bring my car back to the body shop from the accident and tell them to fix their shoddy work. gotta deal with insurance again to have their lifetime warranty cover the repair.

But back to the matter at hand...

damn, these lugs are fucking cranked on here. I used my torque wrench to install them back in the spring, shouldn't be that crazy. But the little wrench supplied with the car just offers no leverage. Foot kick it, hand-hammer, nothing.
Rain is picking up... time to call in the pros.
looked who's near by and made a call. 3 min later the wrecker was there. quite impressive actually.

He struggles with the lugs too. ended up with a 3 foot lever on the thing, so i'm glad it wasn't just me being a wuss. The lugs were all rusty for some reason.

but it's nearly flat.
fml.

Luckily, I was 30 yards from a gas station and was able to get air.

I do have to say, the spare is pretty hot. basically an 18x4 HX wheel (i'll take a pic later)

The tire is toast, i drove on it too long and the sidewall is chewed. gonna need a new one. I'm probably just low enough where i can't just replace one either, so i'll need 2 new fronts. that's $400. :/

i'll deal with that in the spring (if i still have the car). Just gonna limp home tonight on the spare and put the snows on a little early this year.. Hopefully I won't have the same issues with the other lugs. At least at home i have a big breaker bar.


so, PSA, check and fill your spare if you haven't done so in a while. it's probably low.

VIP
Sorry bud. I know that feeling. When things go wrong, its at the worst time ever.

Briansol said:
I was out late last night jamming with some buddies. drank too much for a weekday... dehydrated, headache, and it's pouring rain.
Click to expand...

the flat sucks though, ive been there
went to help a co-worker who had a flat and got one of my own on my way back to work
said fuck it and swapped the tire out for the spare after work
spare was damn near flat
luckily i have my electric air pump so i was able to fill it on the spot

VIP
When you fill your rolling tires, you need to check your spare too. It's a good rule to have. Glad you made it alright, that could have sucked a lot more.

When I was in Germany, they'd actually check the air pressure of your spare during the safety inspection...

VIP
hey-thinking again. the gen comes with a spare... my VT comes with a fixaflat kit and an air pump. the pump works so good, i got one for $20 still in bag for kristens jetta.

VIP
yeah, having been stranded in the countryside with a sidewall slice, I'm going to keep a spare in the car, heh.

really, the issue was the shit cheap beer, not so much the qty of it.

I just remembered the compressor is still broken too. gonna have to do it by hand. no air tools.

the drain plug broke off inside and i haven't found another one (reality: I haven't looked) so it doesn't hold air.

TurboMirage said:
hey-thinking again. the gen comes with a spare... my VT comes with a fixaflat kit and an air pump. the pump works so good, i got one for $20 still in bag for kristens jetta.
Click to expand...

Those things are the devil. Your wheel will be fucked if you use it. the tire shop certainly won't put forth the effort to clean it out, cuz they hate those things too.
the M had that too... mobility kit or whatever. never used it luckily.

VIP
the one time i needed to use it, it was frozen and blew up all over me and the car. it didnt matter, it would not have solved the issue that i cracked the rim.

Moderator
VIP
That sucks. I carry a pump in the truck, but a good reminder to check the wifes spare tire.

Working construction I am always worried about picking up a screw or nail in the tires.

VIP
I also had a late night drinking, I rarely do this. Totally hung over today and a low pressure light on the BMW this morning. I have run flats and no spare though.. :\

VIP
you guys are getting soft

i carry a full size spare and jack on trips over 100 miles. otherwise, i would make kristen bring me a tire, lol. i dont carry a jack either.

Admin
VIP
i can't get insurance quotes under $400/m. my accident screwed me :/

Admin
VIP
A little wider and these would be hot.

Not bad for a spare.


Got the snows on.

All good to go.


Im surprised how low tread my rears are too. two summer seasons. I was hoping to get 4 out of them. If I still have the car in spring I might just get a full set of tires 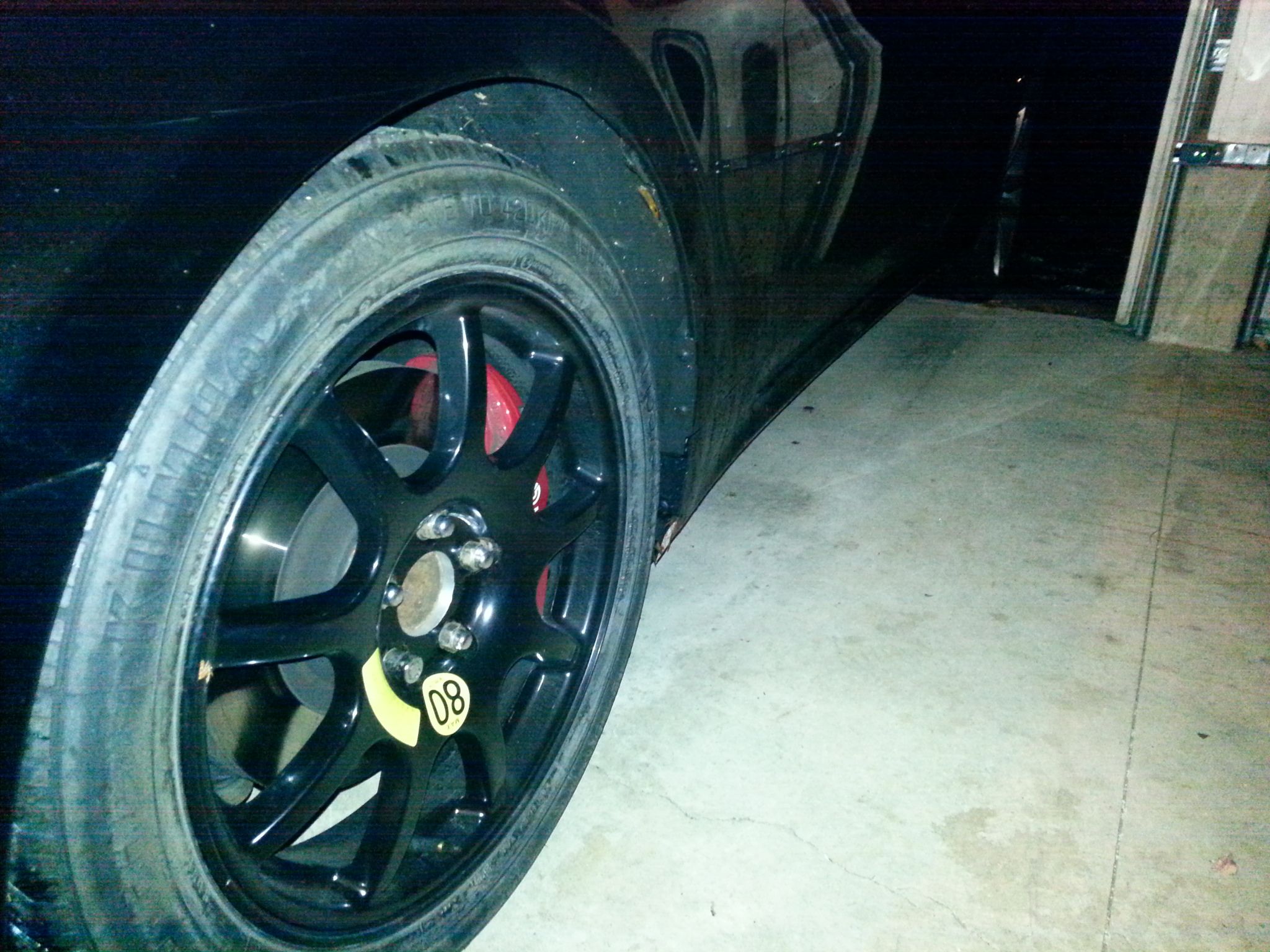 Briansol said:
i can't get insurance quotes under $400/m. my accident screwed me :/
Click to expand...

VIP
if you decide to get tires let me know i know a few guys that would do you right.

Admin
VIP
still looking for a full set of wheels too. even the bk2. you sent me some in the past that i should've jumped on

VIP
I am also thinking of running gen wheels for daily... They are a great fit lol