I know that this would normally go in the "other vehicles" section, but nobody goes in there, so I'm hoping I can keep it here to get more traffic. plz y0!

Anyhow, As some of you know, I picked up a '76 280Z to "get down wit ma bad self" and put a Ford 460/C6 autobox in. It's in mediocre condition, but solid and not all that bad for a nearly 30 year old car of Japanese origin. I have an early-casting 460 with the good heads (higher CR, 350ish crank hp). All of this was supposed to come together to make a badass vehicle at some point in the near future.

All of this changed today. There's a '90 or '91 RX7 Turbo-II that I can probably trade the Z and drivetrain for. It's in good condition, has a starting problem that stems from the incorrect installation of an intake system. Has a full SS exhaust system, lowering springs, shocks, a lip kit. Needs a steering wheel. The owner is kind of disgusted with it because of the starting problem.

At first I was like, No way. I like the Z's styling, it's gonna be a badass car when it's done, etc. But then I started thinking about it, and essentially the Z needs an entire interior, a little bodywork, and probably an entire set of bushings at least, in addition to shocks and springs. The RX7 is looking better and better simply for the fact that they're damn sexy, it needs a lot less work, and it's a fuckin T-II.

Insight? Opinions? It would be my "fun car". Liability only and only driven a couple days a week.

get the T II, sell the ford stuff, rebuild the 13b and boost he hell out of it
B)
just my opinion

That's the thing though, it doesn't need to be rebuilt. It ran fine before the intake went on. I used to see the car being driven around town.

I intend to increase the boost, but not by more than 3 psi or so.

VIP
Eh, I simply don't like the looks of the second generation rx7, it looks too much of a wedge for my taste, the later ones look good however.


I love how the 280z looks and think its an awesome car.


Looks aside, you're always going to be tuning the rx7 and tending to broken pieces as a result of boost levels.

With the 280z, god knows what you're going to have to tear up and replace along the way, plus doing all the work just to get the car up to par to begin with.


Both are obviously tuner cars and need their share of work. I think it comes down to whether or not you want a 4banger that comes with its share of turbo issues or a big american v8 thats older than hell and can't have its share of problems, but atleast parts are cheap.

Then comes the issue of handeling. Is the big v8 in the front end of the 280z going to throw its handeling off to the point where you have to buy far heavier springs upfront just to balance the car out? Are you going to be having a lot of handeling issues to cope with in order to make it handle how you want if you're not just driving in a straight line?

The rx 7 is obviously going to handle like a beast as soon as you do some suspension mods.

When it comes down to it, you're dealing with cars that will more than likely have reliability problems given their age. If you're prepared for that, you're prepared for anything, so make the decision on the car that you're most attached to. If you want the rx7 simply because it needs less work, don't get it because in the end you're going to be doing a boat load of work on either of the cars. 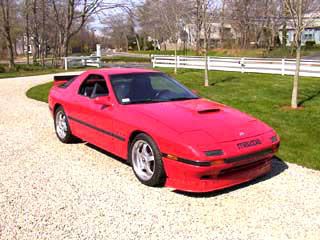 VIP
Personally if I was ever going to get a Rx 7 or Supra, I would get the last generations or not get them at all.

I know its not in the cards for you to get a newer Rx 7 and thats not what you're asking about, but as I said if it wasn't last generation I wouldn't even consider it. The 280z is a far better investment than the t II rx7.

I realize that. I have a daily driver. If something breaks on the fun car I can save up to fix it.

In addition to just getting the 460 in the Z, the problem is going to be increasing the Z's structural integrity to handle the power. And yes, the handling in the Z will be complete ass with the huge V8 in it.

In addition to just getting the 460 in the Z, the problem is going to be increasing the Z's structural integrity to handle the power. And yes, the handling in the Z will be complete ass with the huge V8 in it.

...but whats it intended for? If its going to be a drag car/street racer than it doesn't really matter. Its certainly not going to be an autocrosser unless you dump a shitload of money into it.


If you read my last post though, the 280z is obviously the better investment monetarily.

The car isn't really about monetary investment. I plan on keeping it for a very long time. And really, it would be more of a handling car than a straight-line car. The 460Z would demolish the T-II in the quarter, but the T-II would be at least capable. I like the sound of a rotary much more than the sound of an american V8.

If I get the T-II I think I'd like to take it up to PIR and roadrace it periodically.
P

sit in it first.

i know i could never drive an fd. fc, is pushing it. sit in it before you decide.

Both are obviously tuner cars and need their share of work. I think it comes down to whether or not you want a 4banger = no Rotary = yes that comes with its share of turbo issues or a big american v8 thats older than hell and can't have its share of problems, but atleast parts are cheap.

and i like the TII look just as much as the latest version, maybe more, but i agree with pissdoff, def sit in it first, feel it out then make your choice

Well, the Z is the smallest "feeling" car I've ever sat in. I fit okay in it. Headroom is okay. I'm just a wide-ass sumbitch.

also make sure its really an intake gasket issue, and not a worn seals issue...

those motors are a cock sucker

LOL! Who's that old guy you were talking about awhile back that had a show on public access or whatever who would demand money while telling you you're going to hell? Made me think of that guy.

Oh, and I found an '81 200SX for ya. The first ones with the fixed headlights and datsun badging. It's in perfect shape.
P

...fuck. I might just have to lose some weight.

VIP
They make all kinds of bolt on kits to drop in SBC or Ford motors in them.

It's almost as common in the Z world as it is to put a B series in a honda.

It's the work that you put into the car that make you happy when you drive it...


people with money just buying a car and driving it...has no idea on how much work it is to do it...

a lot of work...some sweet bolt on toys, paint and polish...and any Z is will be hot...

turn key RX-7's will have their problems down the road....and then again...you might get lucky...and it may be a runner for a while...


another thing to look at is the aftermarket...

prices for spare Z's, and even used parts are still fairly decent...and sometimes even free....