Engine:
95 USDM Acura Integra GSR swap. Bought it from Intercrew in Richardson in May, had 40k on it. Swapped it into my hatch on May 21, 2005. I've only put around 8k on it since then, and the oil has been changed every 2000 miles with Mobile 1 5w30. Motor pulls awesome, doesn't smoke, knock, tick, etc. I shaved the 'DOHC VTEC' off of the valve cover, and repainted it with wrinkle red paint (same as OEM ITR), and removed the secondary butterflies. The motor has been tuned with Uberdata, and pulls smooth as hell (doesn't have the lag that you'd get with a stock ecu caused by VTEC kicking in at 4500rpm). The absolute only problem with the motor is there's a dent in one of the runners on the downpipe, but it's FAR from crushed and doens't affect flow WHATSOEVER. Transmission doesn't grind at all, and the clutch was replaced before I bought the motor (or so I was told...it feels like new so I've never had the urge to pull the transmission and check). I've got a 1-piece AEM cold-air intake from a GSR that I've cut into 2 pieces and modified a bit to fit in my hatch, and it looks absolutely perfect (no hack job). It's got a 2.5" inner diameter Tsudo stainless steel catback, with a GSR cat. The motor also has a BRAND NEW coil, rotor, and Hitachi ignitor that I put on last Thursday, as well as a set of Magnecor plug wires. I ordered a set of NGK's from InlineFour, that haven't come in yet (even though I ordered them over a month ago). If they come in by the time this is gone, I'll throw those in, too.

Audio/Electronics:
Kicker 6.5" mids in front, Alpine 6x9's in the rear. No head unit.


The car was painted a couplea months ago, paint is damn near PERFECT. There's a couplea rock chips, but nothing a smooch of touchup paint won't fix. The AC blows ice cold. Tires have 50% tread on them, maybe a little more. I dunno, I dont feel like measuring the tread. All the interior is there, and it's got a rear cargo cover/deck thing that I made. The interior plastic was originally blue, but it has all been painted black. I'm not sure what the door panels are from, I THINK they're from a JDM EG but I'm not sure. They're originally black. The front and back seats, as well as the carpet, is originally black. The car was rebuilt, but it doesn't show. The ONLY PLACE anything is off is the driver's side door, and I GUARANTEE you that adjusting the door where it bolts to the hinges will fix that. I started to adjust it a while back, and got it to line up, but when I went to tighten the bolts on the hinges it moved, and so I got mad and gave up. That, and it was like 9 gazillion degrees outside.

I live back and forth (on a day-to-day basis, pretty much) in Lufkin and Groveton (both are about 2 hours north of Houston). I only drive the hatch occasionally to school and back (I've also got an 01 Prelude and an 89 Nissan Pathfinder 4x4, so the hatch doesn't see a whole lot of use), and you're more than welcome to come check it out, and if you've got cash in hand you can drive it if you like. Just don't wreck my car.

Oh yeah, I just got the windows tinted last week, 5% in the back and 20% in the front, with a 20% strip on the windshield. It's got a lifetime warranty on the tint. 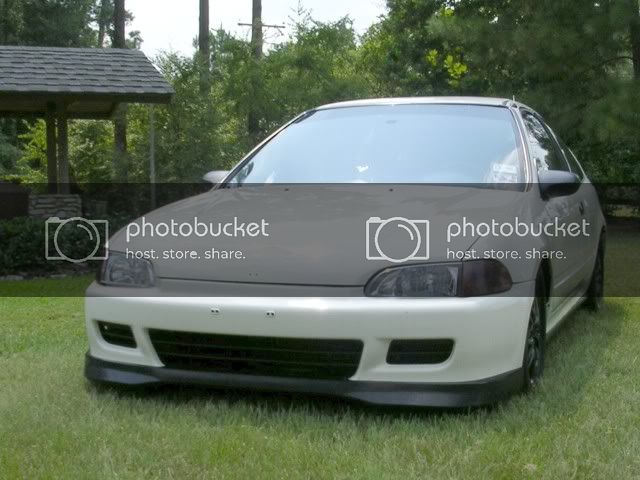 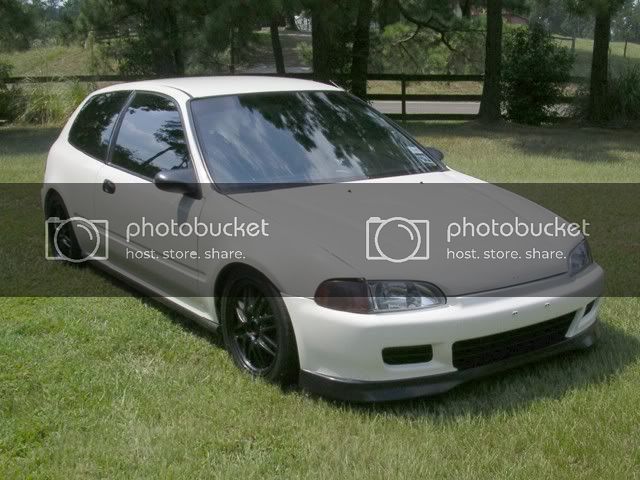 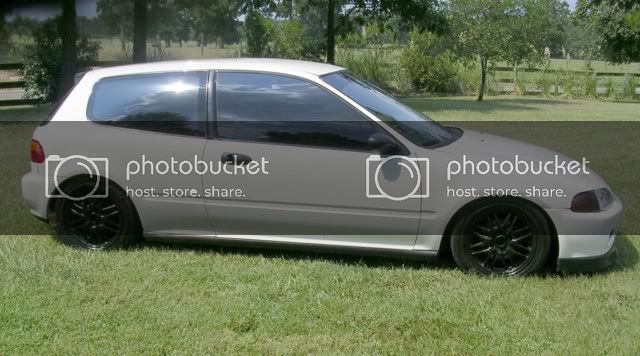 damn y0 if i had the cash and was out of school id come get it from you, but i dont. so here is a free bump. i hope it goes to a good home.

VIP
DAMN, that shit is clean....props on the Champ. white..love that white...exactly what i want...

VIP
got my hatch already...pulls strong too..not much done on it...

Will I will trade you for my Teg

J/K.
That is clean as hell though

I see why you are Lufkin Texas PIMPIN yo.

VIP
your teg is teh secks

Watch it Will LMAO.
Bump for you though
Good Luck with the sale.

VIP
It is! silver teg + gunmetal wheels + polish lip is teh hawtness, y0

*edit* whats the deal with the salvage title?

Admin
VIP
Fix the phone number in your post.

those are si door panels i have the same ones.....wtf why are you selling this you just finished it? bump for you but sad to see it go.

VIP
I'm a broke-ass college student, with no job.

VIP
Are you fucking kidding me Wil?

Is this for real?

VIP
Yeah. I'm done with the hatch. I want something stock. Bone stock.

VIP
PS are you drunk Wil? why's this in parts FS?

that is a clean looking hatch