Just wanted to say thank you to the many great threads I found on here that helped immensely with my recent obd1 b18b1 manual swap into my 2000 ej6 automatic. I didn't end up getting many pictures of it yet, and as a brand new member I doubt I can upload any directly yet. So I'll do it eventually, haha.

It was quite a fun experience. I have worked on anything with an engine for the better part of 30 years, so it was pretty straight forward. But the help on what I needed, and wiring changes, and how to go about things, has been immeasurable.

I have actually done it on the cheap. I had a good friend with a 94 LS he crashed a year and a half ago, and it's sat there. I've pretty well stripped all the rest of the parts he hadn't for his new 00 ls with an CR-Vtec build in it. I got the timing belt mount and A/C mount from a Cr-v at the wreckers, the passenger upper tranny mount from a manual d16y8 civic at the same wreckers, as the B and D series manual ej/ek civics used the same upper transmission mount. I had the front tranny mount from the 94 teggy. I ended up cutting and welding the integra transmission t bracket, instead of getting the 99-00 si t bracket. I need to take it out and remove a touch more from it, as it does hit my front subframe under WOT. Mind you, both my front lower chassis side rubber mounts need replacing, so that doesn't help much.

I of course used the civics wiring harness, extended the TPS wire, and had to extend the oil pressure sender lead. I used the obd1 alternator that came with the engine, just added the obd1 plug to the harness, keeping the obd2 plug, just in case. I used an obd1 dizzy, but made an adaptor to go to the obd2 harness, and added the dark blue wire from the 2 plug part of the obd1 dizzy to the tach check wire on the driver shock tower. Changed the wiring for the IACV as well. I got the cluster from from the manual civic at the wreckers I got that tranny mount from. It also still had the shift boot with it still. I used the shifter linkages from the 94 ls I pulled the engine/tranny from.

Im actually using 2 obd1 injectors and 2 obd2 injectors at the moment. I had 6 injectors in total, and those were the 4 that worked, haha. It's a bit janky at the moment, but, I'm working on it. It drives, everything is in solid. I need to replace the rear o ring for the water pump. The one on the line that feeds right to the thermo housing. I retained the obd2 EVAP system.

The only new part I had to buy for the actual swap was an axle. The whole swap took about 25 hours, that's including time to pull the parts. Cost me in total around 800 bucks in Canadian monies. The car cost me 500, and was in excellent shape. So it hasn't broken the bank, yet. This is just stage 1,cause I need a vehicle havjng a 2 year old and the wife at work with the other car.

That Honda is a another project down the road, haha.

Anyway, thanks again for the excellent information.

Admin
VIP
Awesome. Glad the info here could help. You can attach pics directly withe the button below the text box... New or old.
O

Sweet. I wasn't sure if new members could upload photos or not. Some forums don't allow it,, because, you know, spam and NSFW stuff.

Anyway, here's a few photos of the ride. It needs some body work, but, I have the driver rear quarter panel to fix the hole, and the ej civic I pulled the mount/cluster/shift boot from has a good passenger door, as mine has started to rust out along the bottom seam. 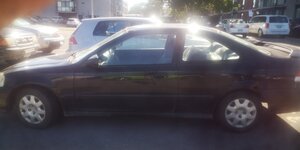 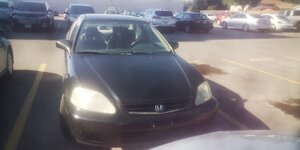 And the donor engine/tranny, ant the b18 put in the civic.

Sorry for the really bad pics here. The rear camera on my phone is pretty messed up. 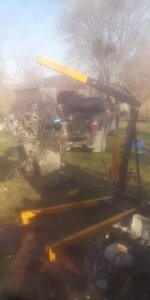 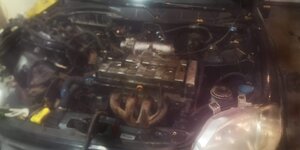 Admin
VIP
Yea man... Next investment is a phone from this decade lol.

Some wheels next?
O

Yeah, the glass over the lenses was cracked and removed last year. I usually use the front camera and just mirror the image afterwards.

Oh, those pics aren't that recent. I am rocking some better wheels now. 7th gen Canadian civic Si Veloz Edition. Got them from a coworker. But, he does have a set of the 6th gen SiR rims (I'm in Canada, so American 6th gen Si rims) I may procure from him.
You must log in or register to reply here.