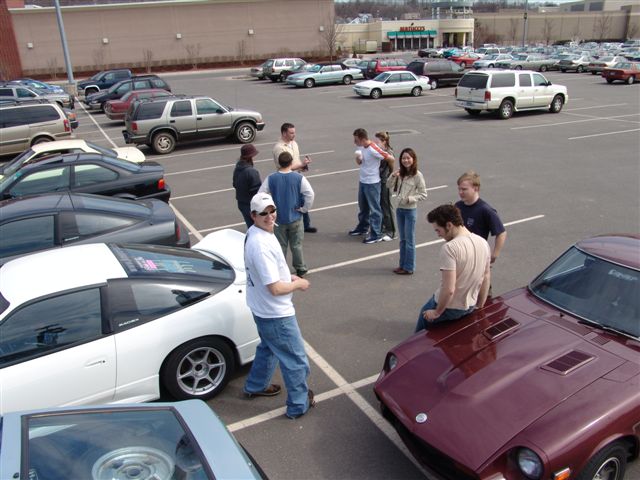 Funny enough, right after you guys sped off (Thanks for the cut-off Travis!) mall security showed up and GRILLED me about the gathering. Fuckers. They told me I couldn't take photos and escorted me out of the lot.

I'm holding the camera, denting the shit out of my Civ's lid.

im still in CT (not going to PA)

what day were you guys there?


Friday Morning. Met there so the Northern and Southern guys could cavalcade to Pitt.

This Sunday, I'll be in Waterbury doing Auto-cross. Blue Civic EDHatch with black windows. I'll save ya a spot.

IMPORTANT EDIT: I responded to the thread, but forgot to login as Celerity.

Moderator
VIP
im probly gunna hit up the autoX ... dunno if ill actually race but ill probly be there
9

So much for the Real-Time progress report! No word on how our team did yet?

hope you guys had fun at the autocross. i couldt make it....gotta head to the airport in about 5 minutes (3:30) . i guess i could have come, but would have had to leave early. oh well, see yall at the next for sure.

Moderator
VIP
welp once again sleeping in beat out autoX


Yeah, iRomeo (Turborage) said he was gonna be checking in from the hotels and the such, and with 6 big-time posters in the same hotel I thought this thread would be slammed with posts on their progress.

I just got off the phone with pissedoffsol. Things are "Totally fucking awesome" and they are enroute to the lair.

(Remember the blue STI wagon? Won't be seeing it for a while. Something odd happened during his finish line deceleration, and the car flew into the curb, through a small tree and into the woods. The people living in the neighborhood next to the school even responded. Driver is ok, if not quite shaken and the Scoob got lots of front-end peppering, and a busted up wheel and axle.)

FCSCC has begun policing their tire brands - And Azenis will put you (as it did I) into a "Street Tire" class. Was I in CSP (Where I belong) I would walked away fairing quite well. Instead I turned up last-place in what is now dubbed "The Miata class". One off-course (Who would I be if not for my moniker "Steve the Gate-Misser?") and for some odd reason my tires pumped to 45 psi at the gas station - Which must not be calibrated because I ran 3 runs with -> 65 <- psi. I backed the pressures to F-R 40-32 and ran a killer run - But that whole racing segment was disqualified for the accident.

This looks like the year of the Rookies at FCSCC. Quite a good class of rookies are in this time (And a large class - somewhere between 30 and 45) so this year is going to see some heavy hitters.

Overall FTD went to Sam again - So we need to hit this track with a vengeance!

VIP
it was great. got some good rear end work.... rob/bill did fuckin excellent getting into the competition. the agx's on the rear worked out really well, didnt really burn off hardly any tire though. met some new friends and picked up a few idea's for the girl's car.

took lots of pics, and ill post them tommorow/night.
P

had an awesome time. we all got sideways, alternators were squeeking, front bumper supports were sparking, and 1 cop later, we're all home, safe, and ticket free (at least until we all split up)

I have over 80 min of video.... but i can't fucking figure out how to DL it through the USB. i think i nedd to get an iLink cable. that, and my copy of premier is fubar..... so i need another copy of that *hint*

VIP
i could hook you up.

no tickets, but those dudes in the red/black 240 followed me up through hartford. then they were in m rear view.

This Saturday is an autocross in Westchester and Waterbury, then Sunday is CART.

I was going to attempt the Westchester autox, but i found some safety gear under the driver's seat of my whip so I need to show up in Waterbury on saturday.

Had fun....got sideways, got sideways and then some, spun too many times, when I finally got the control down the event ended...so I will be going to the drift clinic on the 14 or 15th...down in NJ...sorry, no spectators....just drivers and instructors, but a nother full day of seat time, with a teacher....at only $50


I can't make the DOW this wednesday, or any close autocrosses...with in a week
or two....the LSD is not happy...and I need to source some parts ASAP for it. ANd the wife wants a little time with me away from cars.....

ANd the wife wants a little time with me away from cars.....

That's funny.. I just started getting mine back into the car scene. We may do more stuff around them this week.

working on the video now. it's REALLY choppy. It looked much cleaner on the view finder. bill's g/f did 80% of the filming, and obviously she's not a professional video taker. there's also a LOT of a crap on the tape...

I'm over 400 MB right now, semi compressed... lol I gotta shrink it down to about 100mb, or i won't be able to host it anywhere. so, editing is going to be a biotch.
I'm using windows movie maker too... my premiere is bunk. so, it's going to be in wmv format instead of divx