It's got a d16y8, manual transmission, has front end collision damage (possibly more than once), and has been painted once (maybe twice?).

VIP
what about the interior? you're also looking for Si on the seats and gauge cluster.

VIP
It has absolutely nothing Si about it, lol. If someone did a swap, they took literally everything off of and out of it.

Here's the pictures I have right now. It's getting delivered today. It's 3.3 miles away from my house, but since it doesn't run and I don't have a trailer (otherwise I'd have a lot more cars like this one)
https://imgur.com/a/mCwks5S 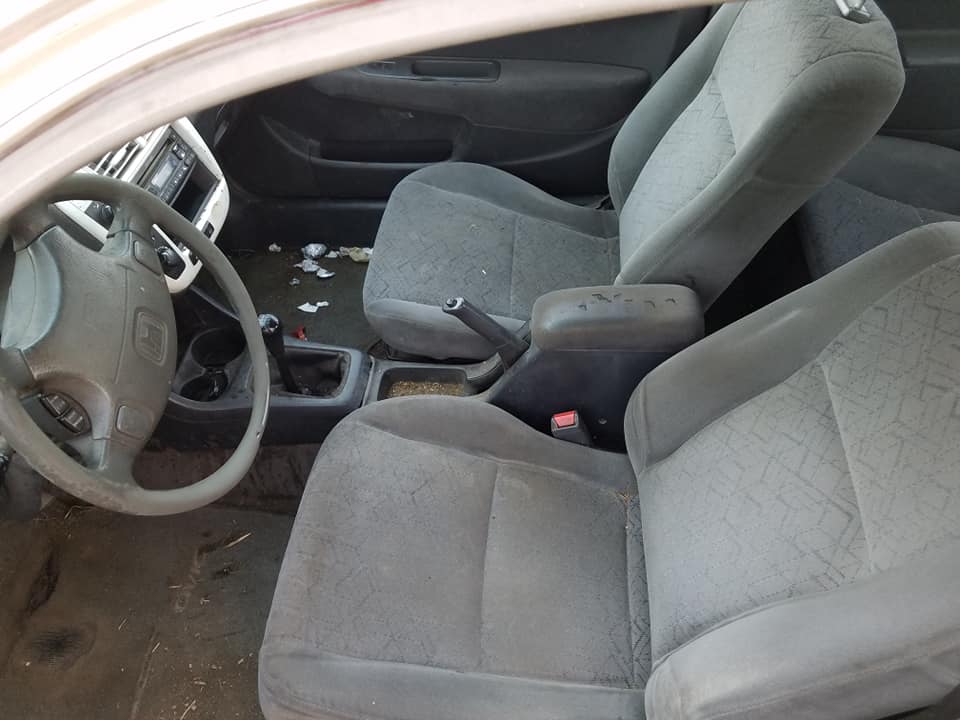 VIP
oof, that doesn't look like an SI at all. i looked them up and apparently the interior does match. does it have a sunroof?

Moderator
VIP
Any possibility this is from Canadia?
The Canadia Si is the equivalent of the US EX

its not a si , the ex says ex/si ersumshit but its not a Si , Si has Sunroof, power windows , tweeters on the door panels (some ex do) , rear seats are same but front are stamped Si and soo is the gauge cluster. its a EX , still worth what you paid for it

VIP
It's at the house now, I'll take some more pictures later when I get home from work. It's odd.

It has a sunroof, A/C, power everything, but no b16a2 and s4c transmission.

I have no idea which transmission it has, other than it's a hydraulic d-series.

It seems like E might be onto something with the Canadian model, but the vincheck.info search shows it was sold in Virginia new in 99, then went to Pennsylvania in 2003, then New York in 2004, then went to Delaware 2007, then Maryland in 2014. So I don't think that's the case. My insurance company says it's an Si, with a DOHC V-TEC engine, so that's either gonna get changed on their end, or it's going to be swapped.

VIP
christ that thing is more beat than my kia

Do all the VINs match? Any record of being stolen/recovered?

What was the original color?

VIP
It was red originally as best I can tell, it has some green parts from a different VIN, I think just limited to Driver's door, front fenders, hood, front bumper, and front radiator support.

The VIN tag inside the door was painted over, I think there's one in the engine bay on the firewall? It's been like 10 years since I dealt with civics, so I'm gonna have to read a lot over the next few weeks.

Kinda Crazy, it's an Si with a mini-me. Lol.

I'll throw up some pictures later. 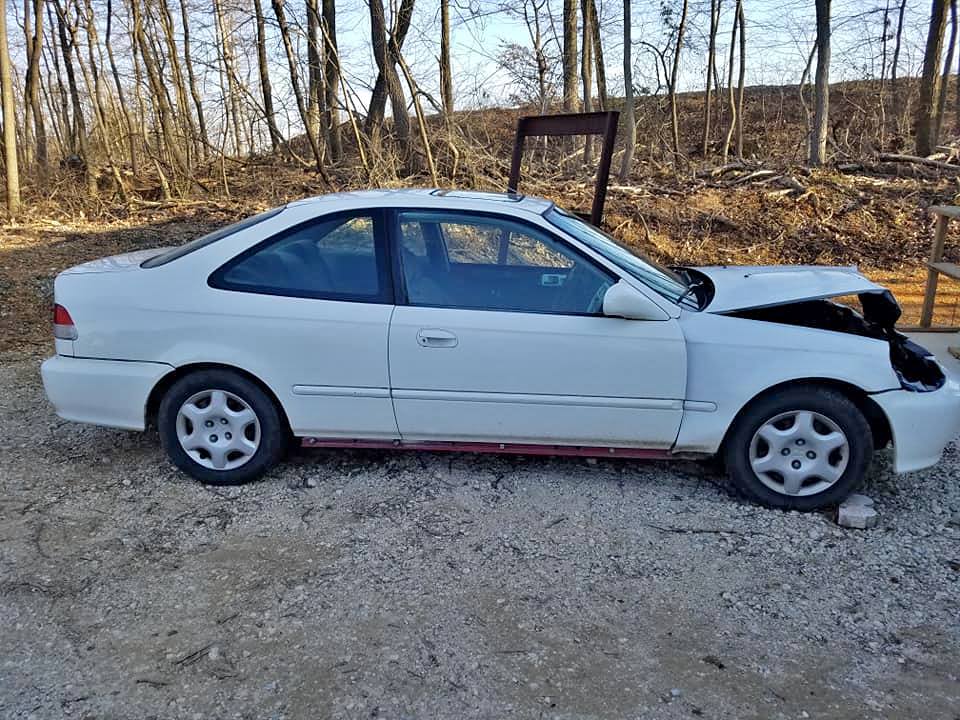 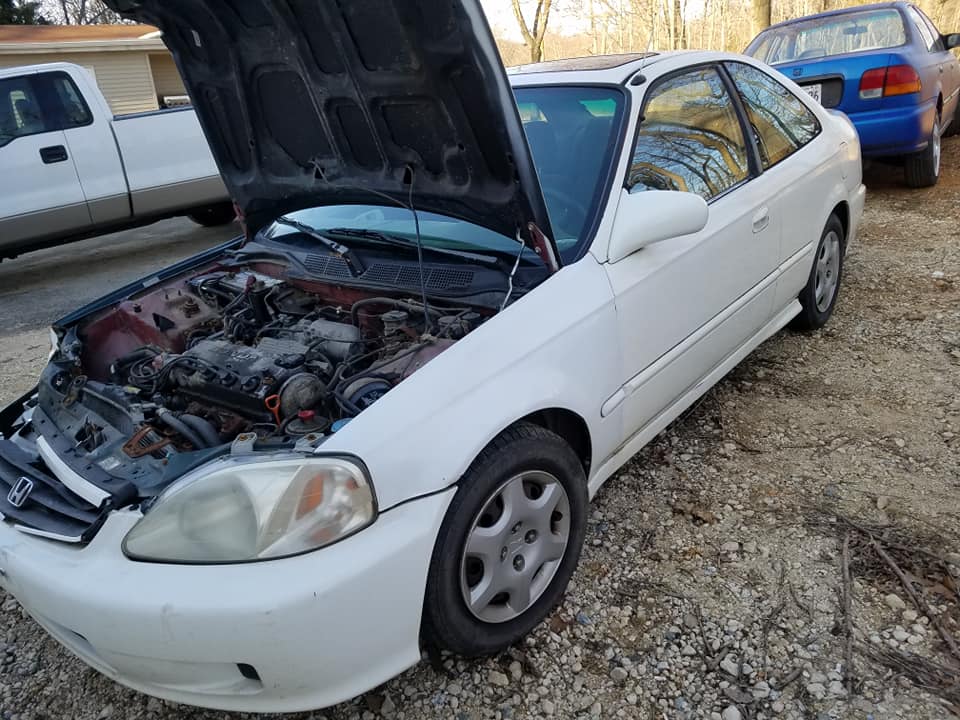 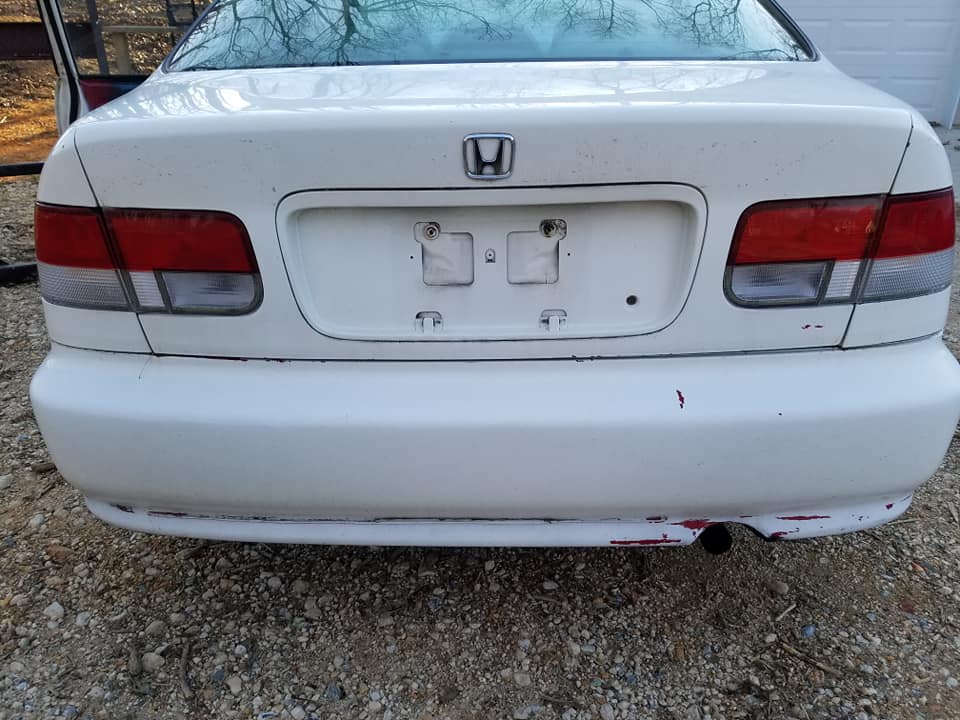 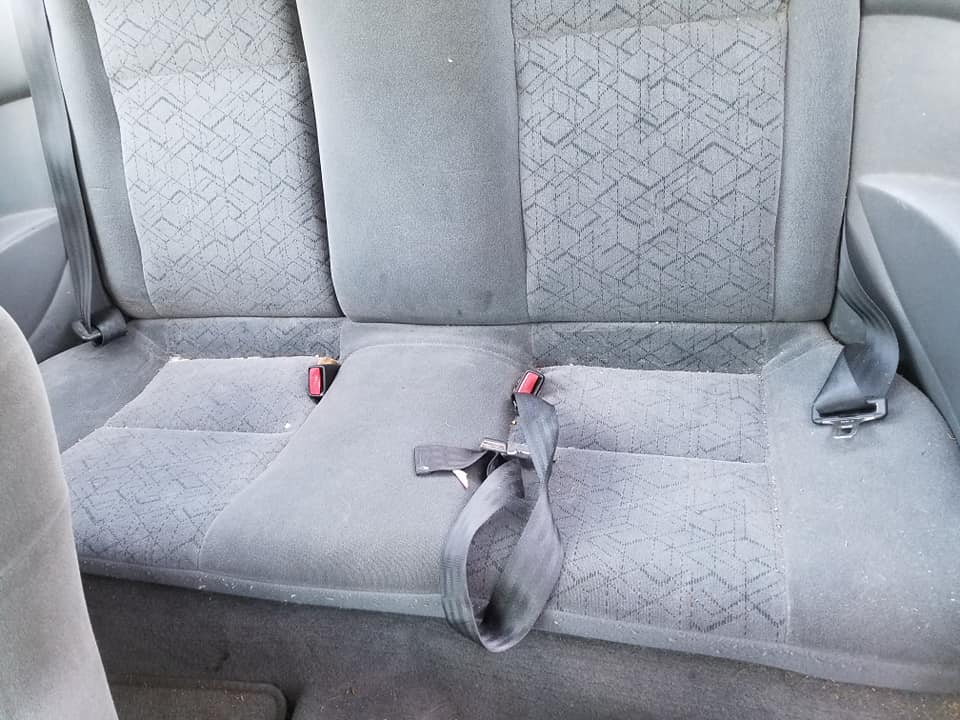 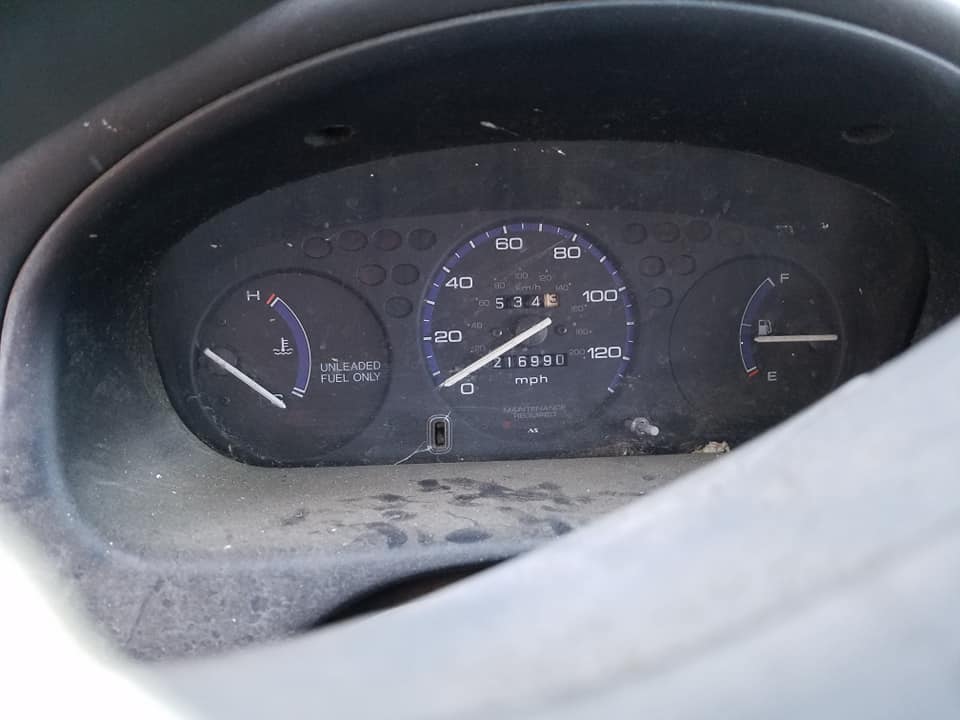 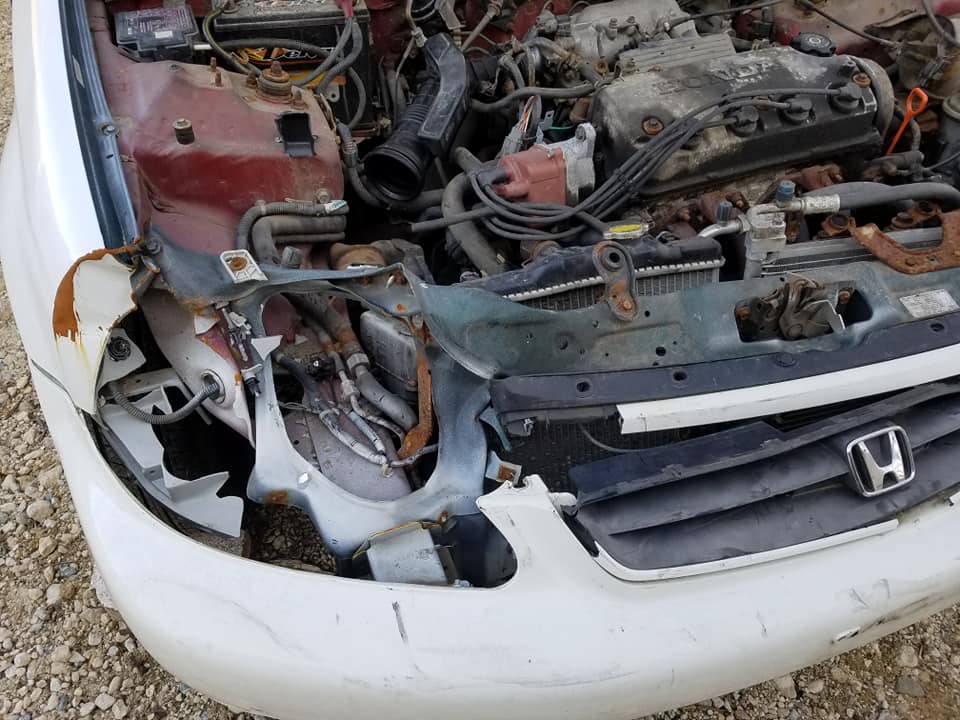 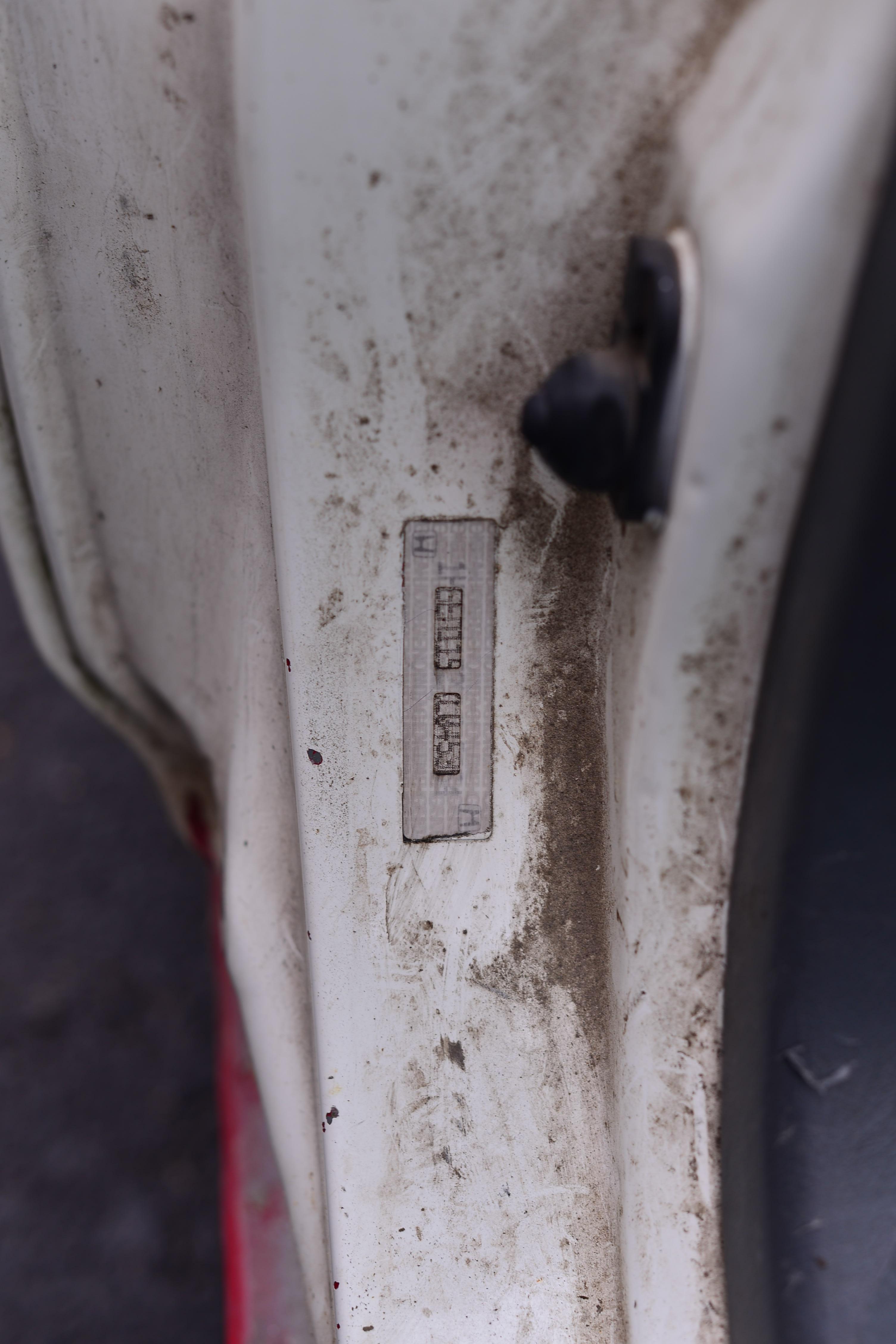 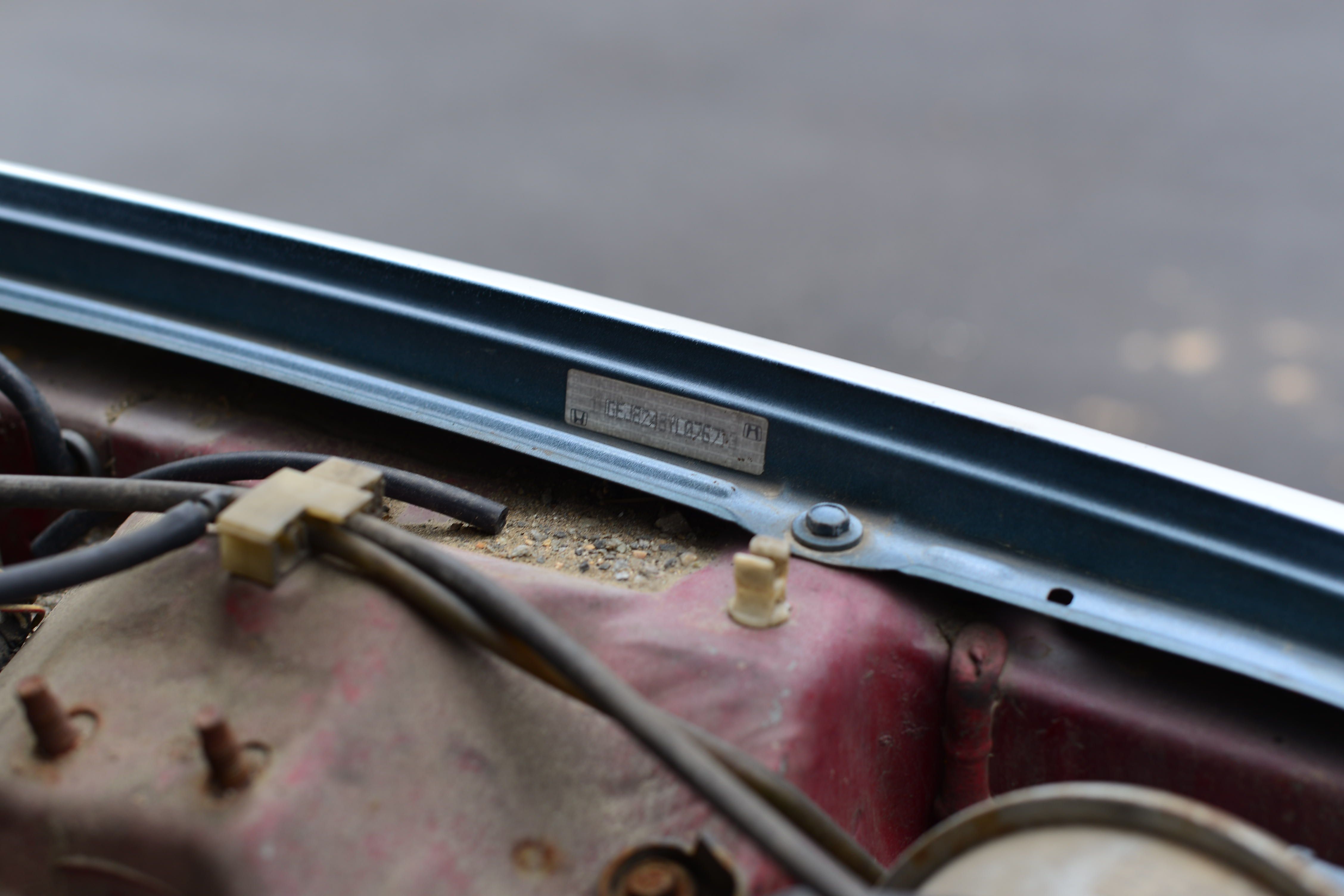 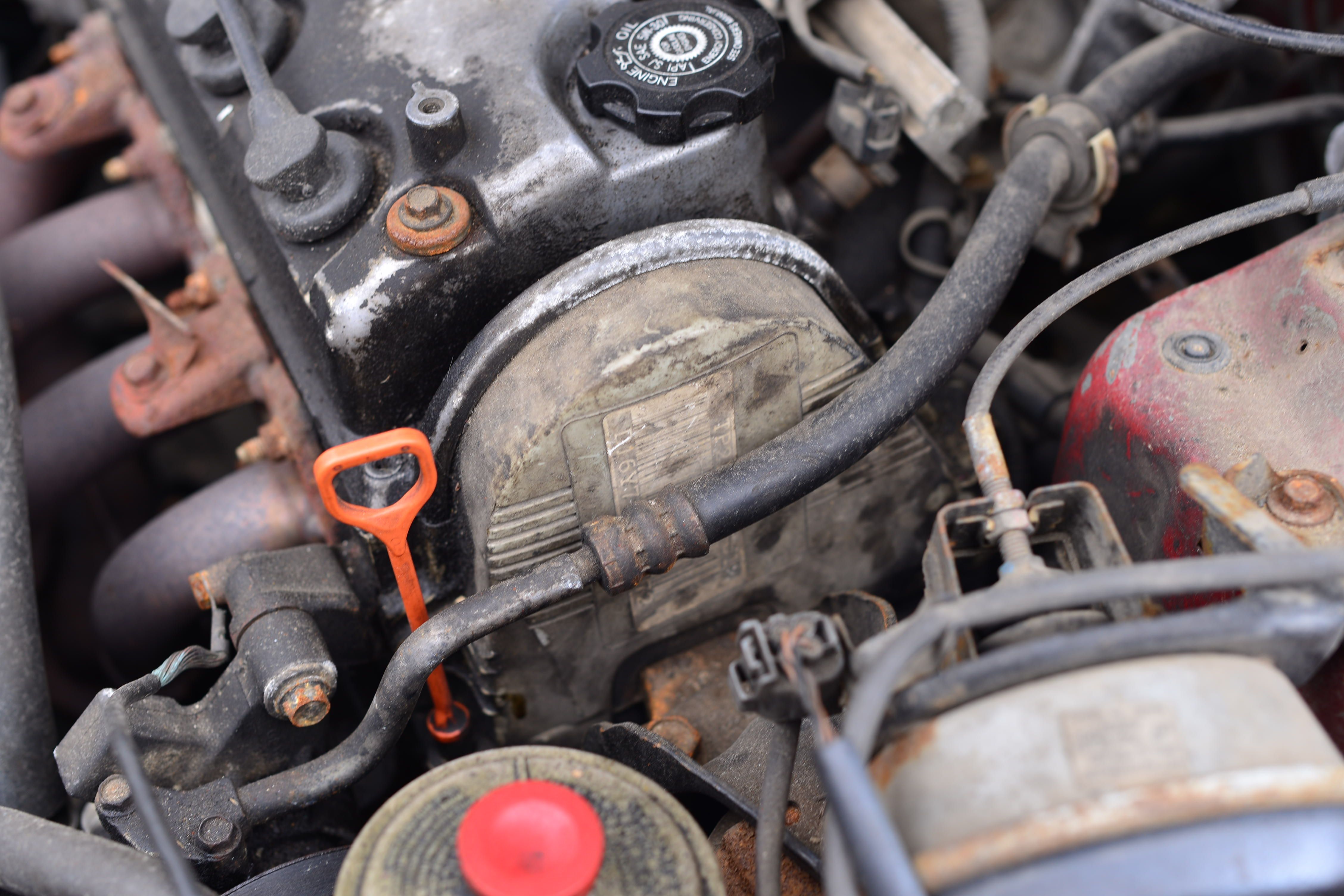 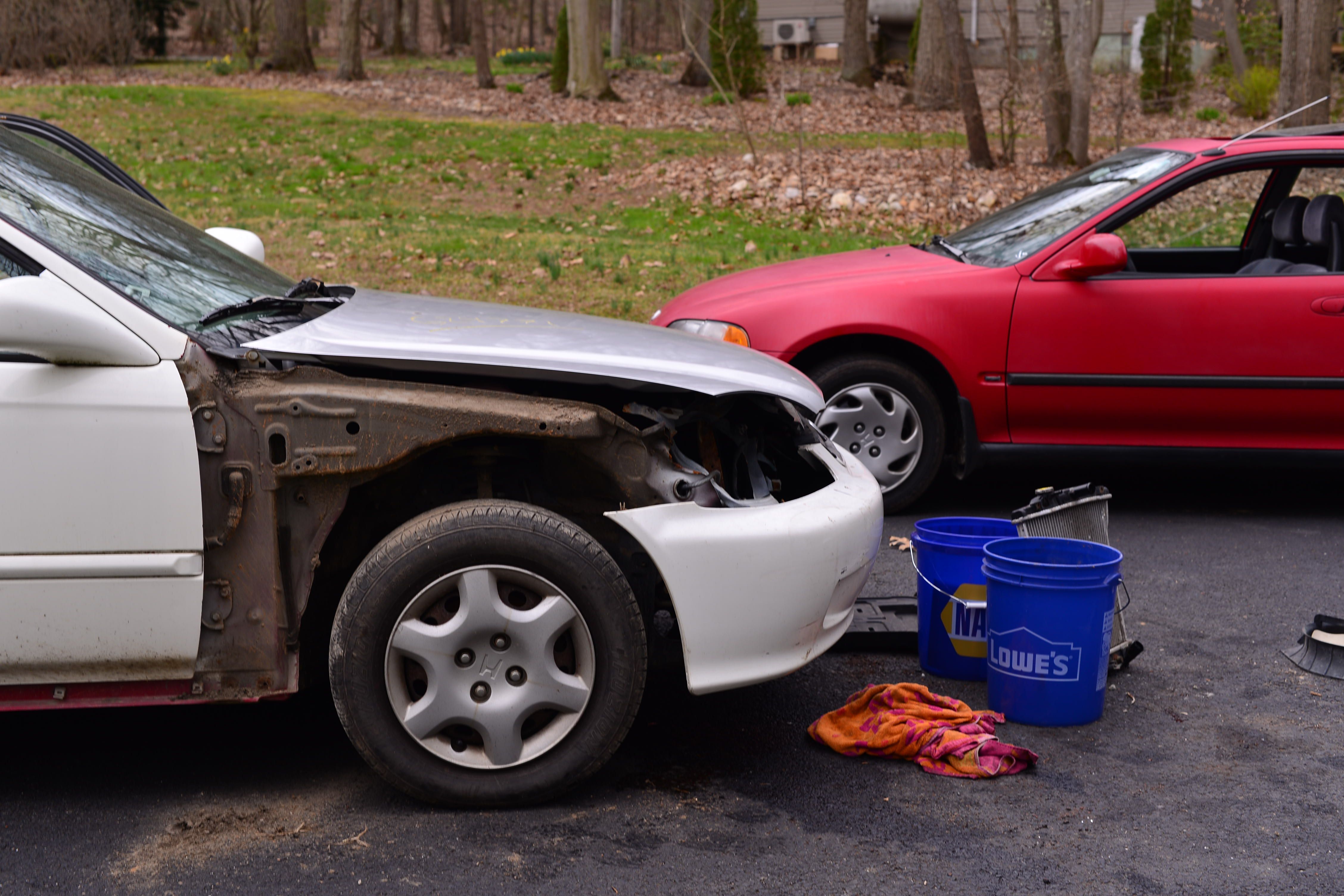 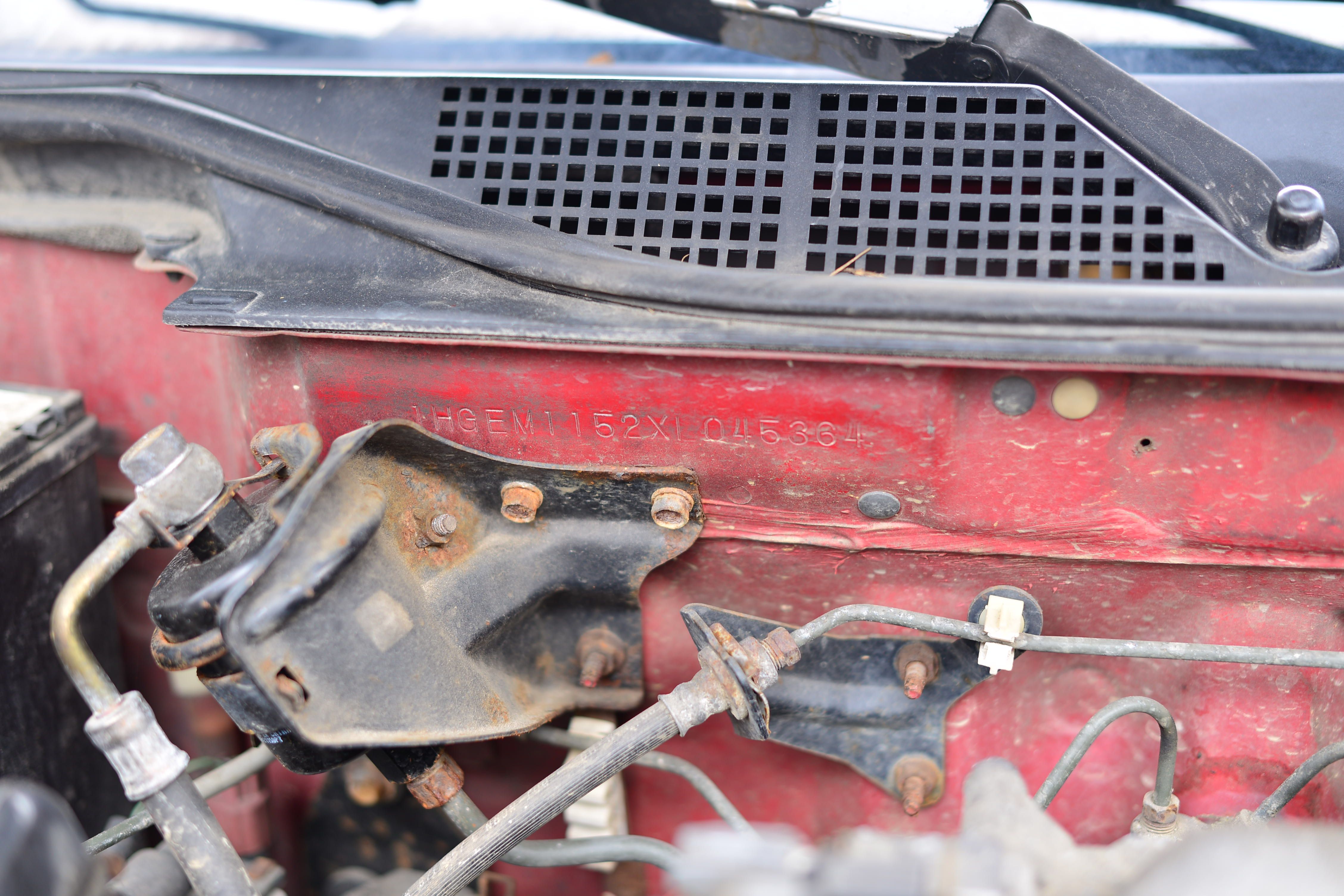 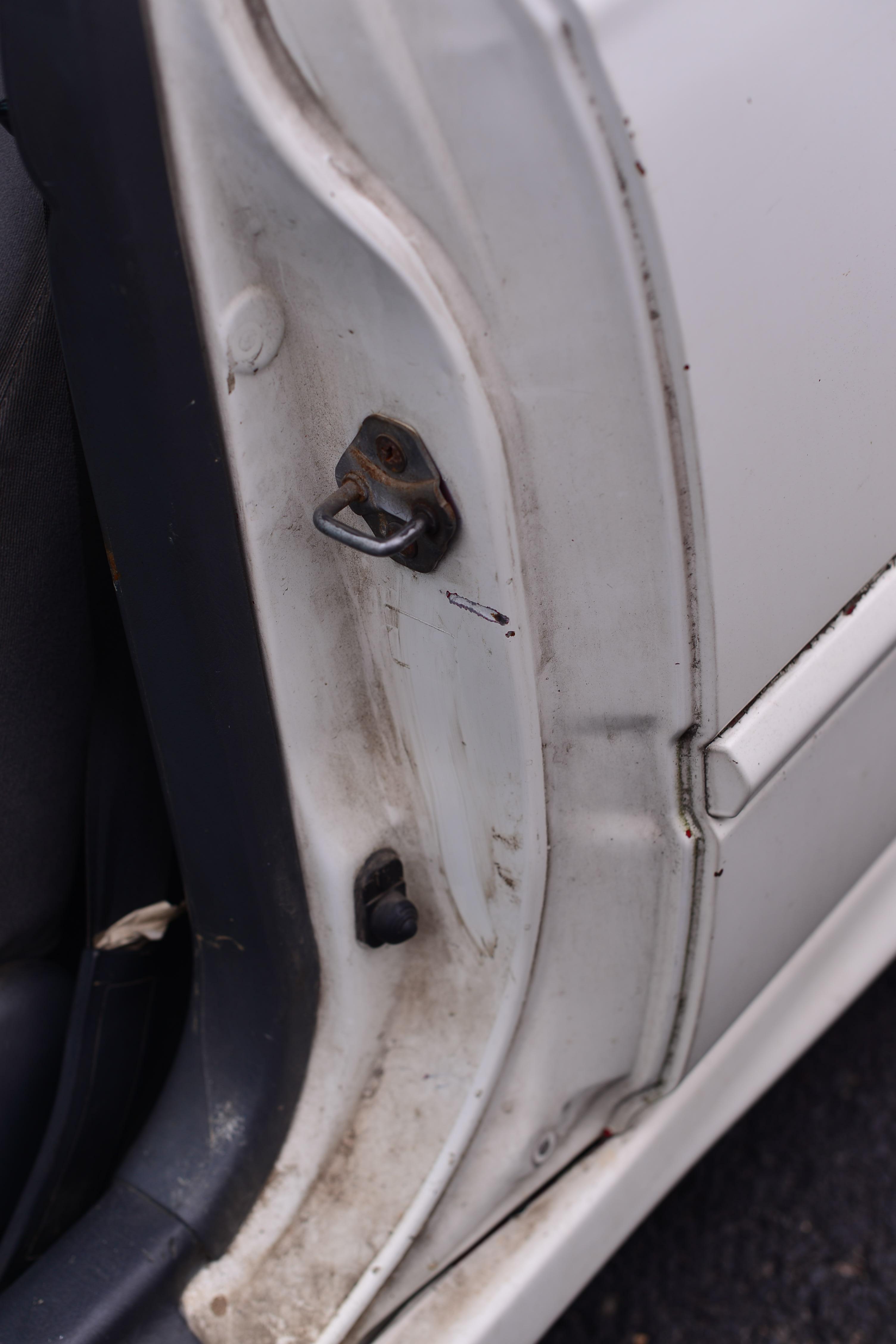 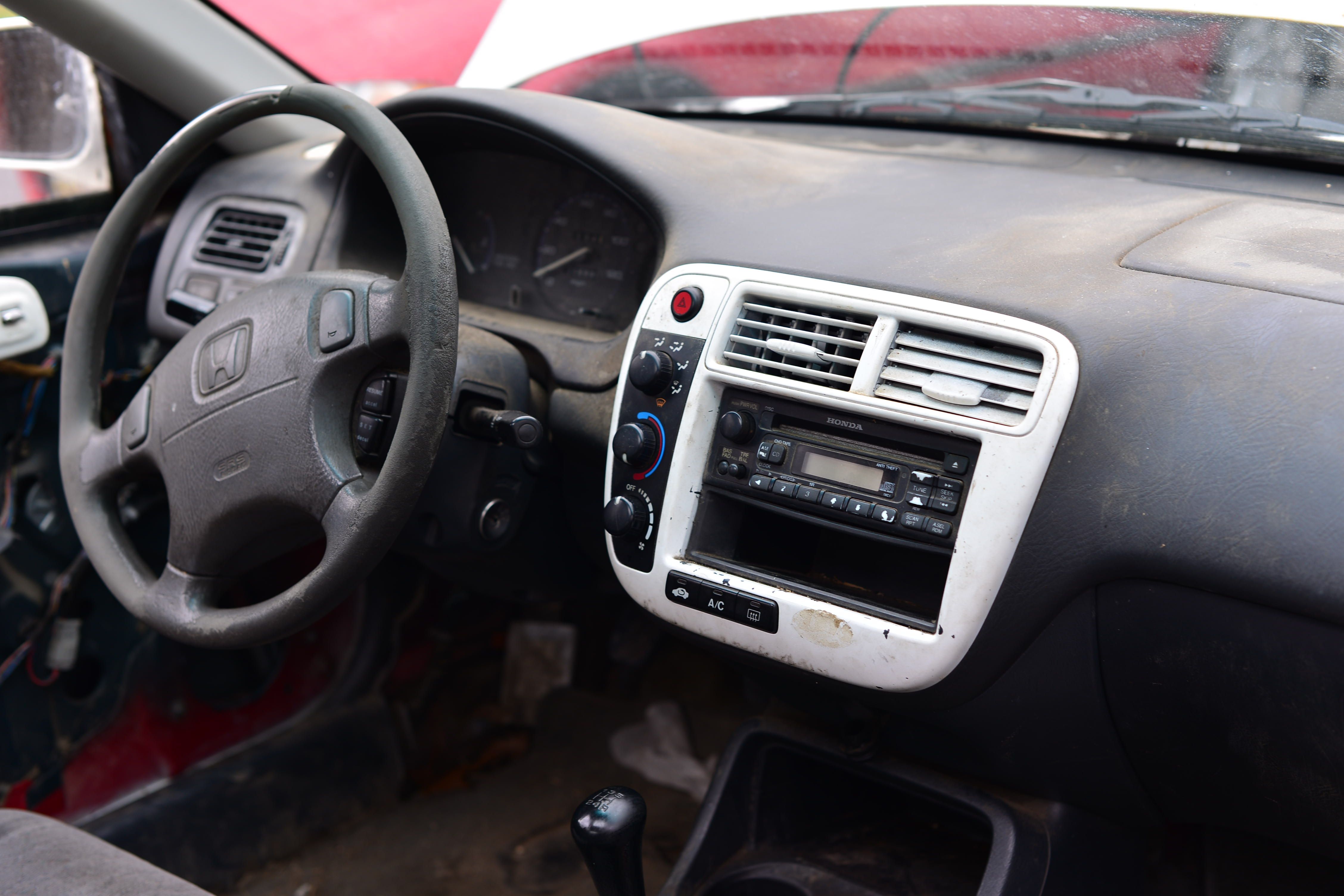 So, I have an Si shell, that has drum rear brakes, and non-Si interior, with a mini-me. Lol.

VIP
We swapped the hood that was on it with a good hood I picked up from a junkyard for $49 with a passenger headlight.

The passenger is going to wait until the radiator, radiator support, and fender go in.

I picked up an upper radiator hose today, a headlight buffing kit, and the UV sealant.

Sometime soon, I'll see about getting a steering wheel, the radio trim (I may just sandblast and paint it), and the door trim pieces. Door cards are apparently made of gold? Who knew.

its fasho a EX, a EX is a step down from Si with a d16, also it isnt a mini me that would be a d15 with a d16 vtec head , its a y7 in place of what should be a y8 soo assuming they tanked the stock bottom end and threw it on a obd1 d16 bottom end

VIP
The ecu is OBD2, as are the chassis, engine, head, and emissions control systems.

Mini-me is just a vtec head on a non-vtec block.

Now that school is over, FedEx says the radiator and radiator support get here tomorrow. Maybe I'll get the mangled support off and the new one mocked up tomorrow, with a fresh radiator, so I can actually try to drive this guy around.

I hooked an OBD2 scanner to it, and read the codes (see how cool non-ancient cars are?) and saw p300-304 misfires, and p1457 no vacuum in fuel tank. I suspect the distributor on the misfires and I have a brand new in box d16y8 distributor from like 2007 to try. The evap code is only mildly concerning, as it could just be the gas cap.

Once the parts get here, it's going to be fun mocking them ip and hoping I have the distances right.
Last edited: Apr 9, 2019

Your a brave man Charlie Brown

Thanks. It doesn't look too bad. The previous owner was driving it until last Thursday, so it's not completely destroyed. It'll at least move under its own power.

I've got a line on some temp tags, so I'll probably do that so I can do a shakedown drive this weekend.

VIP
IF, and big IF, that was an Si, it was ravaged for parts. There's nothing on that car that indicates Si. I'm guessing a chop shop took the car and swapped them over to an Ex and pieced together a rolling shell.

Oddly though, i feel like you could get it to a point to sell it for $1,500. Just be prepared to lose money on it. I'd avoid that thing like the plague.

get_nick said:
IF, and big IF, that was an Si, it was ravaged for parts. There's nothing on that car that indicates Si. I'm guessing a chop shop took the car and swapped them over to an Ex and pieced together a rolling shell.

Oddly though, i feel like you could get it to a point to sell it for $1,500. Just be prepared to lose money on it. I'd avoid that thing like the plague.
Click to expand...

I mean, the VIN in multiple places says EM1, which was only an Si. I'm thinking it was wrecked in a front end collision, totalled out, then everything was swapped with an EX.

The goal isn't to sell this, it's just to have a manual transmission civic to drive around and since it's recent enough to have LATCH connections: I can put my daughter's car seat in it. It's just a fun, cheap, reasonable car to drive occasionally.

My wife doesn't like driving my RamCharger and it's not really car-seat friendly, then the CR-Z isn't exactly car-seat friendly either. Apparently now kids have to remain in a car seat seemingly forever, so it makes sense to have a second car capable of hauling the little girl.