VIP
I moved. We bought a house, and moved into the sticks. Coincidentally, the house is inside of 50 miles from both Philly and Balitimore, giving me the opportunity to pull both television markets in. (The earth's curvature gives sea level line of sight to about 80 miles.) I'm an amateur radio extra class license holder, been doing radio for at least 15 years now.


Jeef said:
Definitely interested in the antennas. I have some ancient antenna on my roof that I haven't hooked up to my tv yet.
Click to expand...

Drake said:
I would be interested in the write up as well. We just cut cable TV off a few months ago and have been shopping around for a tri-pod mountable directional antenna.
Click to expand...

I've got a dual-tuner DVR that streams to my home network, so all you need is a computer, smartphone, roku, amazontv, or xbox to watch the TV. 1TB hard drive for storing shows, and I get two major markets (only the major channels, nothing more than big-3 (abc, nbc, cbs) and FOX.) so I've got more TV than time to watch it, lol.

Now, I'm doing something relatively uncommon, but it works for me. I've got both antennas pointed in different directions, not quite 180-deg, but close. If it were 180-degree separation, we'd have to get fancy with the filtering, but luckily we don't. The front-to-back rejection on television antennas probably isn't enough, so we'd have to put an additional reflector (chicken wire or Al rod at the appropriate distance from the last element) and it'd get tricky.

No pictures yet, except for the prework. You'll want to do this.

Go to TV Fool and figure out if you can actually get TV at your location. I'm pretty good: 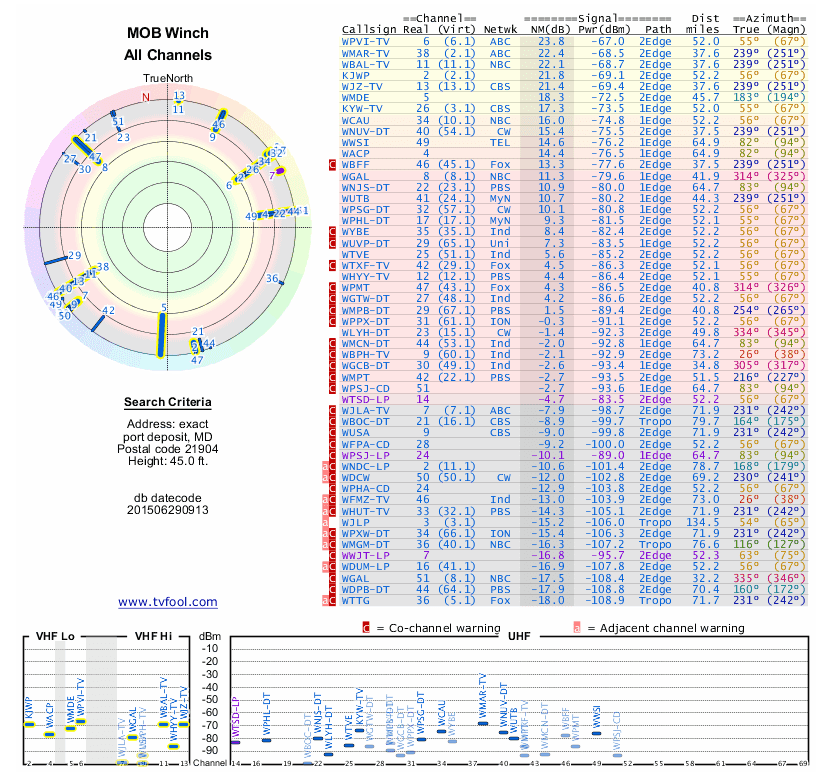 If yours looks like that, you're probably good. Any signal level under like -75dBm is going to take some serious work to get. You can, but it'll take more antenna than most people want on their house. My house had a 19ft antenna when I bought it, eventually I'm going to clean it up and reinstall it so I can get DC.

Next, look up each of the stations you care about. Many markets share towers, so you won't have to do this many times. Find the elevation of the antenna array on the tower (should be AGL, above ground level, or HAGL height above ground level) and then go to google earth to find the ground level surrounding the transmitter tower. Figure that all out, then you'll get coordinates and terrain height above Mean Sea Level (MSL). Write those down.

Now go to HeyWhatsThat path profiler. Click your antenna location, then click your antenna's height above ground level and make it match your receive site, and then the transmitter's location. Modify the height so it's correct. You'll see this:

And that's not bad. There's some edge diffraction, but it looks like there's still a chance for signal.

Moderator
VIP
Thanks for the info so far. The tv fool site is great. My roof mounted 1970s antenna is getting most of the channels except for the ones in the gray area seems to be 98db and above for me. I have an older preamp I may try.

Jeef said:
Thanks for the info so far. The tv fool site is great. My roof mounted 1970s antenna is getting most of the channels except for the ones in the gray area seems to be 98db and above for me. I have an older preamp I may try.
Click to expand...

Keep in mind that your preamp needs to be mounted as close to the antenna as possible. You can have it 25ft away, but it's best to be on the mast. If you have strong stations the preamp can become overloaded, and that will cause more issues than not having a preamp.

Edit: I missed that you said 1970s antenna... You'll want to ditch that. The spectrum television used to occupy is now used by both public service, cellular, and the occasional backhaul links for SCADA. Your antenna probably picks up a lot of cell towers and public service towers too, which desensitizes your tuner. If you hook a preamp up to that, you'll probably notice a decrease in reception.

Do you even internet bro?

VIP
My issue is internet only isn't far off from Internet plus tv money wise.


Currently have one cable box. Rest of the tvs have streaming devices and HD antennas.

Admin
VIP
Yup, that's a thing too. it's about $30 more for cable + hbo + starz vs just internet price.

to keep my internet, add sling, and hbo, it actually costs me more and i'm down starz, and on demand, and other stuff....

I'm paying for a dvr i never use. considering dumping that for $10 a m savings

jeffie7 said:
My issue is internet only isn't far off from Internet plus tv money wise.
Click to expand...

Comcast called me a few times recently. If I ADD cable tv with the standard package to my Comcast internet, i'll SAVE $15/month. I don't know if that is only for the first year though. I told them I wasn't interested.

VIP
Cable companies are notorious for leaving out the 13-24 month price of a contract. When I lived in Baltimore, they raised my internet price from 24/mo to 32/mo, to 56/mo, to 68/mo, to 72/mo. All for the same package of internet. For cable TV, they raised it a couple times, but we finally moved out of the service area.

I'm going to try to get up on the roof again to get the preamps up there. Right now I've got too much other shit to get done with the house. We're going to re-do a bathroom, setup two bedrooms, family room, setup the home office, and I have to re-carpet the stairs to the basement. Then, I can start on setting up the garage the way I want it, and probably setup the basement "club room" the way we need.

I have SlingTV just for the History channel, IFC, and something else I can't remember at the moment. Everything else we watch is Netflix, NBC, Fox, Headline News, and CNN Roku channels, and network television.

VIP
I've got a pair of Fire TV sticks running Kodi/XMBC....everything I could ever want to watch including new/live TV w/a could local stations for news


sticks are only $40 a whack and sideloading them is easy


-just an option for others who want to ditch cable

Admin
VIP
Comcast jacked rates another $15 a month... and i'm hardly ever home any more anyway... and E doesn't watch tv at all so, i think it's time to shut it off.

I'm thinking a home antenna is a good first start. I already have netflix and 'smart tv's/blue ray players that have apps. It should hold me over for the time being.

What's really upsetting is that I'm paying more for Blast! internet on my bill in a bundle than Comcast currently offers it for on their website. wtf?

VIP
I need to got off my ass and finish this tutorial. I've got a couple months of testing done now.

Admin
VIP
Finish this shit. the gf just shut off cable and internet at her place.
Thinking basic tv over the air and Redbox will cover us, and the occasional data big phone hotspot for a Netflix or Comcast app (I still pay for it at my house)

Briansol said:
Finish this shit. the gf just shut off cable and internet at her place.
Thinking basic tv over the air and Redbox will cover us, and the occasional data big phone hotspot for a Netflix or Comcast app (I still pay for it at my house)
Click to expand...

No internet either? WTF? Is this the dark ages?

Admin
VIP
her roommate was paying for it, but she moved out and took the setup/bill with her to the new place.
she has a big data plan on her cell, so she doesn't care too much for it. I can sometimes pick up an xfinity wifi hotspot, and since i have an account can get access. it's just spotty. i bought a cheapo amazon antenna. we'll see how that works out. even if it's just one or 2 channels, at least i can catch the news.

the biggest issue is that all these internet packages all want a contract. if things continue to work out, we won't need 2 homes.... I might just up my cell plan for 20 bucks a month and use that to hotspot too.
You must log in or register to reply here.

U
Accord surging/pulsing rhythmic idle before warmed up