what's it worth? Testing waters: selling or parting out CRX


So I'm thinking about either outright selling or parting out the CRX.

The car has a salvaged (theft recovery) title.

As it sits, it's a 1990 CRX Si with approx. 248,XXX on the chassis. There is ZERO rust on the entire car. Last year I rebuilt the entire chassis from the ground up and took out every single dent, ding, and rust spot. The car has a Wings West urethane bodykit, and has been painted Mercedes Anthracite Grey Metallic, and the paint job is IMMACTULATE. NO orange peel, no runs. There are a few rock chips on the front bumper, and there are some minor nicks on the lip of both front fenders from where the slicks rubbed briefly when my front struts blew. The sunroof opens and closes, but you have to manually open it with the 'sunroof wrench' that I've got. It still closes normally though. When it rains really hard, water drips from the front upper corners of the hatch, and OCCASIONALLY from the front upper (i guess you would call it) corner of the front doors. Last time it rained, however, it did not drip from the doors at all, only minor drippage from the hatch. The car has full Si interior, including all of the rear interior pieces. In the actual trunk, under the deck lid (or whatever you call it) there isn't any carpet, as I cut it out so I could mount my nitrous bottle brackets on the floor of the trunk. The interior is in excellent condition for its age. There are a few minor (and I mean MINOR) scratches in a few places (I can't even think of any particular ones, but I'm sure there are some somewhere. It's a 18 year old car damn near.) The door panels have minor tears on the rear corners from being closed on the seatbelt buckle (stupid door-mounted seatbelts). The seats were reupholstered when I repainted the car, and are the same color as original (black/red/grey). They don't have any tears in them AT ALL, however there is one cigarette burn on the passenger seat (thanks, Katie). The heater and all of the buttons on the climate control work, however the climate control is cracked in the usual place (next to the temperature knob). The car had A/C when I bought it, but the A/C button wasn't there, so there is an empty spot on the lower right of the climate control where the A/C button was at one point in time. The only other thing wrong with the interior that I can think of is that there are 4 screw holes on the passenger side of the center console that I don't have a clue what they're for, the overhead seatbelt indicator is broken/missing (I threw it the fuck out the window because it wouldn't stop beeping at me), and the passenger side carpet likes to work its way out of the kick panel occasionally. There is a Panasonic flip-down MP3/WMA cd player, Alpine 6.5's in the doors, and Rockford Fosgate 6.5's in the rear. The rear speakers don't work. I just never hooked them back up after the car got stolen. The only other modification to the interior is the switch on the dash for the CEL (because it's got an OBD1 ecu and the OBD0 cars didn't have a service connector to jump for the CEL) and a Skunk2 shift knob.

As far as the suspension, it's got KYB GR2 struts on front from a 90 Accord. They're a little bit shorter than the CRX front struts, and allow the shock to be more in the middle of its functional zone, rather than be bottomed out (since the car is lowered). The rear struts are Tokico HP's (aka 'blues'). The front and rear springs are RS*R Race springs. The car has an entire Energy Suspension kit on it, and rides GREAT. Paired with the OEM sway bars and the RS*R springs, it handles REALLY well. Granted, it may not be up to par with a car running ITR sways and Tein Flex coilovers, but for what it is it corners like a motherfucker. Front and rear brakes are OEM-size disc, with Brembo blanks and Hawk pads. The brakes have tons of life left on them, and there are no gouges or abnormal wear on the rotors. The wheels/tires are 195/50/15 Toyo Proxes 4 and 15x7 Enkei RPF1's.

The engine specs are as follows:
B20Z block (B20Z is shaved off the block, I usually told people it was just a B16 before racing them)
Arias 11.8:1 pistons
Eagle rods
stock B20 crank
ITR oil/water pumps
CTR crank pulley
stock GSR flywheel
ACT Xtreme pressure plate
ACT street disc
CTR transmission w/ LSD
Hasport cable-hydro conversion
Hasport fullrace mounts
Skunk2 short shifter/shift knob
PR3 00 Si head
Skunk2 Stage 2 cams
Skunk2 cam gears
Supertech valvesprings/retainers
Supertech high-comp valves
ITR intake manifold
RC 550 injectors
AEM intake
ported ITR header (minor scrapes on the bottom from bottoming out)
Thermal R&D 2.5" exhaust with test pipe, 2nd resonator, and no muffler. I cut off the muffler just after the rear LCA. if you like, I can weld it back on and it'll be quiet...as it is it's pretty loud, but pulls a bit harder.
Nitrous Werks 75 wet shot - the nitrous is wired to a relay that is activated by VTEC and controlled by an arming switch. when the switch is armed, the nitrous kicks in as soon as you hit VTEC. Acts kind of like a homemade WOT switch. The nitrous lines/solenoids are mostly hidden. You have to know it's there or be looking REALLY hard to find it.
P28 ecu
Hondata S200 tuned by st00pidfast - put down 220whp and around 156tq (I don't remember the exact torque) all motor, never dyno'ed with the nitrous.

Like I said, there's a slight knock coming from the block that I'm 90% sure is the #3 rod bearing, and I just don't have the time and/or effort to pull it apart and mess with it right now.

I'd kind of just like to gauge what it's worth, and see if you guys think I should sell it as a whole or part everything out...


Here are a few pics, I took some pics 2 nights ago that are at my apartment that I'll put up when I get off work. 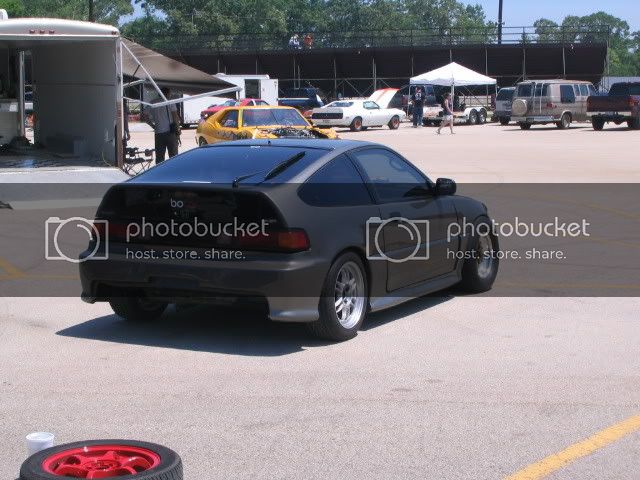 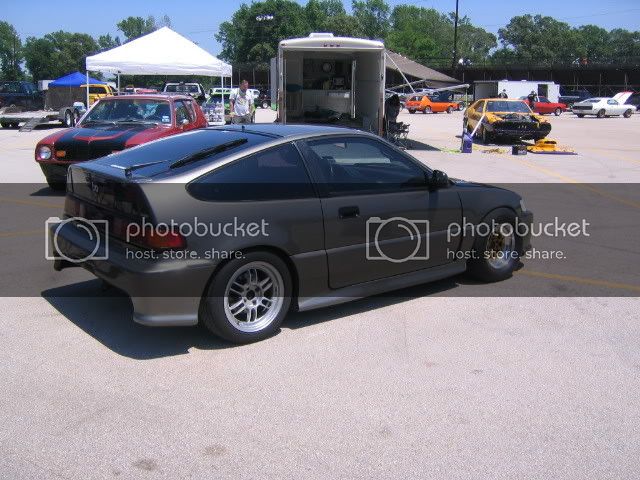 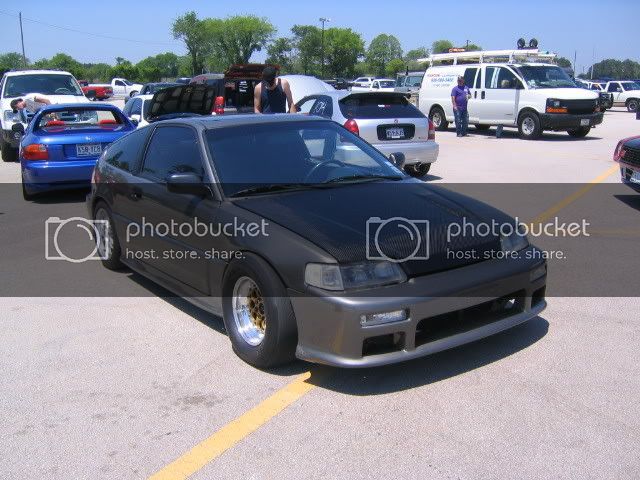 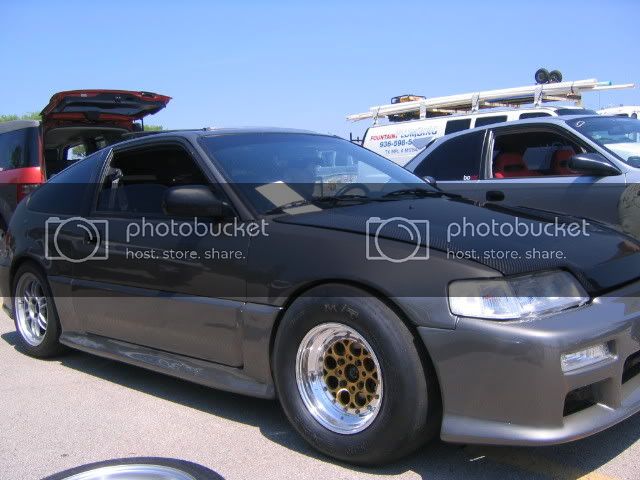 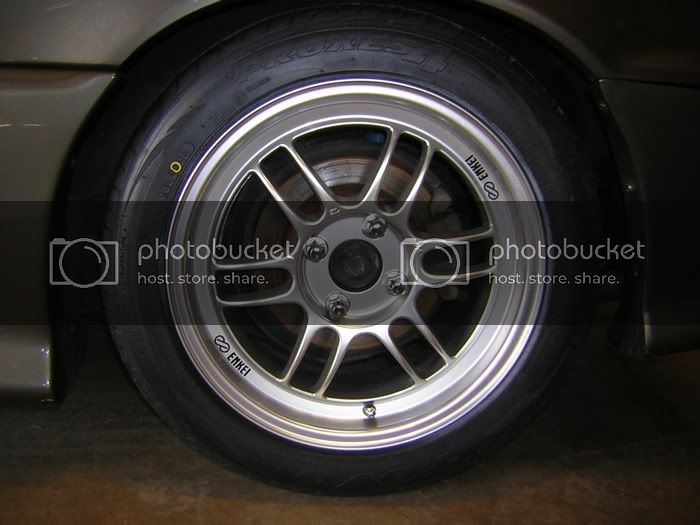 ahhvtec said:
well down here you could get 4-5 grand for her
Click to expand...

sorry to see this go.
S

ahhvtec said:
well down here you could get 4-5 grand for her
Click to expand...

They would pay 4-5 grand for a CRX with a damaged motor?

Its a nice car and I would love to have it. Too bad I am broke.
M

do you sell or trade the HONDATA? I have some Si rims i want to get rid of
You must log in or register to reply here.