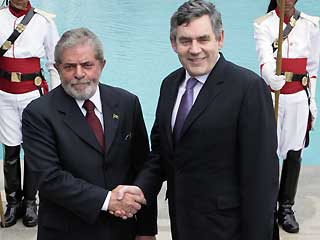 Brazil's President, while meeting with British Prime Minister Gordon Brown Thursday, said the global financial crisis was caused by "white people with blue eyes."
Luiz Inacio Lula da Silvamade made the comments after talks with Brown to try to forge a global consensus on how to save the worldwide economy.
During a press conference, da Silva, a socialist who told Brown poor countries should not have to suffer because of the mistakes of the rich, suddenly pointed his finger at Brown and said, "This is a crisis that was caused by white people with blue eyes. And before the crisis, they looked as if they knew everything about economics."
Sky News' Joey Jones said it was an "uncomfortable" moment for Brown.
"The President does not mind using fairly flamboyant language. He likes to give extensive answers to journalists," he said. "But some of it was rather awkward for the Prime Minister, who was standing there listening to the President. A few eyebrows will have gone up at what he said."
Downing Street says the remarks made by da Silva, who is white, were meant for "domestic consumption."

Jones said: "People in Brazil are very frustrated and angry at what they feel is the injustice of the situation: a crisis that has essentially come from the banking sectors in places like the United States and the U.K., but is affecting their country."
Following the meeting, Brown told reporters he will urge G20 leaders to back a multi-billion dollar fund to reverse a slide in world trade.
"I'm going to ask the G20summit next week to support a global expansion of trade finance of at least $100 billion to help revive trade in all parts of the world," he said.
A shortage of trade credit, which allows exporters and importers to settle accounts, has been a factor in a sharp drop in global trade which is exacerbating the economic downturn.
Along with the trade stimulus plan, the Prime Ministersaid he wanted to see global standards on salaries in the finance sector.
He went on to say he believes South America is key to achieving an agreement at next week's G20 summit in London.

VIP
that british prime minister guy should have been like "oh yeah, well fuck you, fuck brazil, and fuck your trade agreement!" and walked off hahaha

apparently racism is ok as long as its against whitey

So true. It's all because of me that everyone can't afford jack shit. VIP
Nothing will come of this, however if it was because of the blackys they'd be demanding that we go to war wit dem.

If my white ass was standing there and said, the reason for this crises is because of dumb black people with black eyes. I would of got shot with in the next hour. but this, guy stands there and throws out racism, and its fiiiiiine.

"Dont worry guys! He's just upset, he didnt mean anything by it."

wow.. these were the points i was making when i posted my https://hondaswap.com/members-lounge/you-have-got-fucking-kidding-me-257527/ thread and everyone just called me racist!

Yeah gotta love how it's all good to be racist against white people. It's just that we don't give a fuck
You must log in or register to reply here.

as of this year its officially fucked
2

the bailout is a raging success
2