ok so i have a ef with an b18A swap as some may know and im currently in the process of trying to make the car as stock as possible.. the guy who i bought it from says i needed a stock integ ecu so i bought one.. 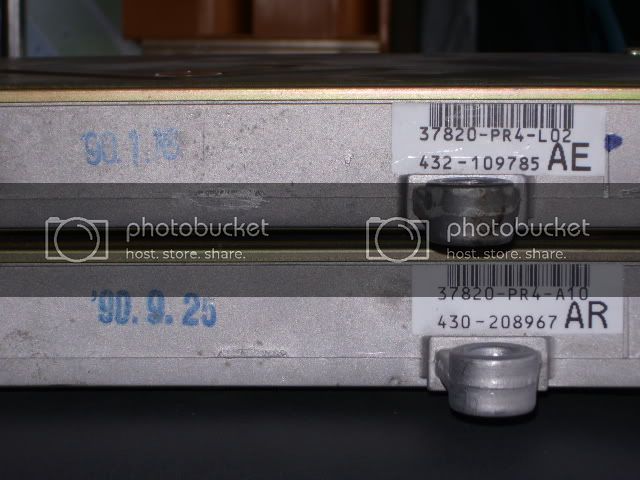 now the one on top is the one i pulled from the car and the bottom is the 91 integra ecu [thanks to brian11to1]
so before plug n play i just wanted to know why the top one woudnt be the right one for the car and what type is it?? is it the ecu from the original civic?? and if so does anyone want to buy it?? haha.. what i really wanna kno is whats the benefit of changing the ecu to the one i recently bought...

you see the wires all the way to the right?? well those wires lead all the way into the engine bay over here...

and some other issues i might as well add... why is there a screw on top of this hose?? what is originally suppossed to go there??

the shop also said my car wasnt running because of my fuel pump and im on the way to the junk yard ot get a new one.. can anyone tell me whether this is automatic or manual one??

and also another problem

you see that clip on the left?? well that was a wire that was cut and i found its other end by my fuse box inside, and it was a cute wire that lead to nowhere. i figured it was for the alarm and simply took it off.. now the clip on the right leads to the fuel injectors and i was told by the previous owner that if it was to ever be d/c, the car wouldnt run

ok now heres the whole story as short as it can get.. im trying to get the car to run.. it died on me through an intersection.. and it died a couple of times before that.. the battery lights would flash on as well as the oil.. when it finally died on me it wouldnt start at all.. it would keep turning over but wouldnt start... later on that night i try to start it again and decide to clip that wire on the right as i have mentioned and it still wouldnt start.. now i bring it to the shop n they tell me that i have to replace the fuel pump.. they wanna charge me 260 just for labor.. so im like hell no and i bring it back to my place.. but the thought crosses in my mind that maybe its cuz i clipped that wire on the right that the fuel wont pump because maybe it was a fuel cut off switch... but now my battery's completely dead when i get the car back from the shop

so im going to check the relay today and maybe just get a new fuel pump altogether cuz its gonna cost me 15 bucks for a used one at the junk yard.. i was just wondering if anyone could tell me whats up with the wiring.. im also in the process of removing all the alarm components in the car.. and get my car to ruuun
X

Hard to tell from pictures what the actually wiring issues are. I suggest you find a downloadable Helms or Haynes manual and study the wiring diagrams (this will take time).

As far as the two ECUs. L02 is from a California car (different maps for emissions) and this is from a 90 integra. 90 integras had the PA sensor wired up under the dash. The A10 is from another state than Cali 1991 integra, and the PA sensor is internal to the ECU.

THANK YOU SOOO MUCH for the help... no one, i think, woulda been able to tell me much more than you just have..