VIP
I see a receiver hitch on your civic soon with a trailer for the bike.
Just sayin'

reckedracing said:
I see a receiver hitch on your civic soon with a trailer for the bike.
Just sayin'
Click to expand...

But, yeah, I already have a trailer, and I might very well need a trailer hitch for the next time Hot Rod Drag Week comes to the East-coast. I've got a trailer hitch on my cr-v, and that'll hold me over until my drag week aspirations actually happen.

VIP
One tire done. I'll do the rear later tonight, because it's too hot outside. The rear rubber isolator on the drive wheel is actually in good shape... My sv650 was only 9 years old when I replaced that one because it had deteriorated. 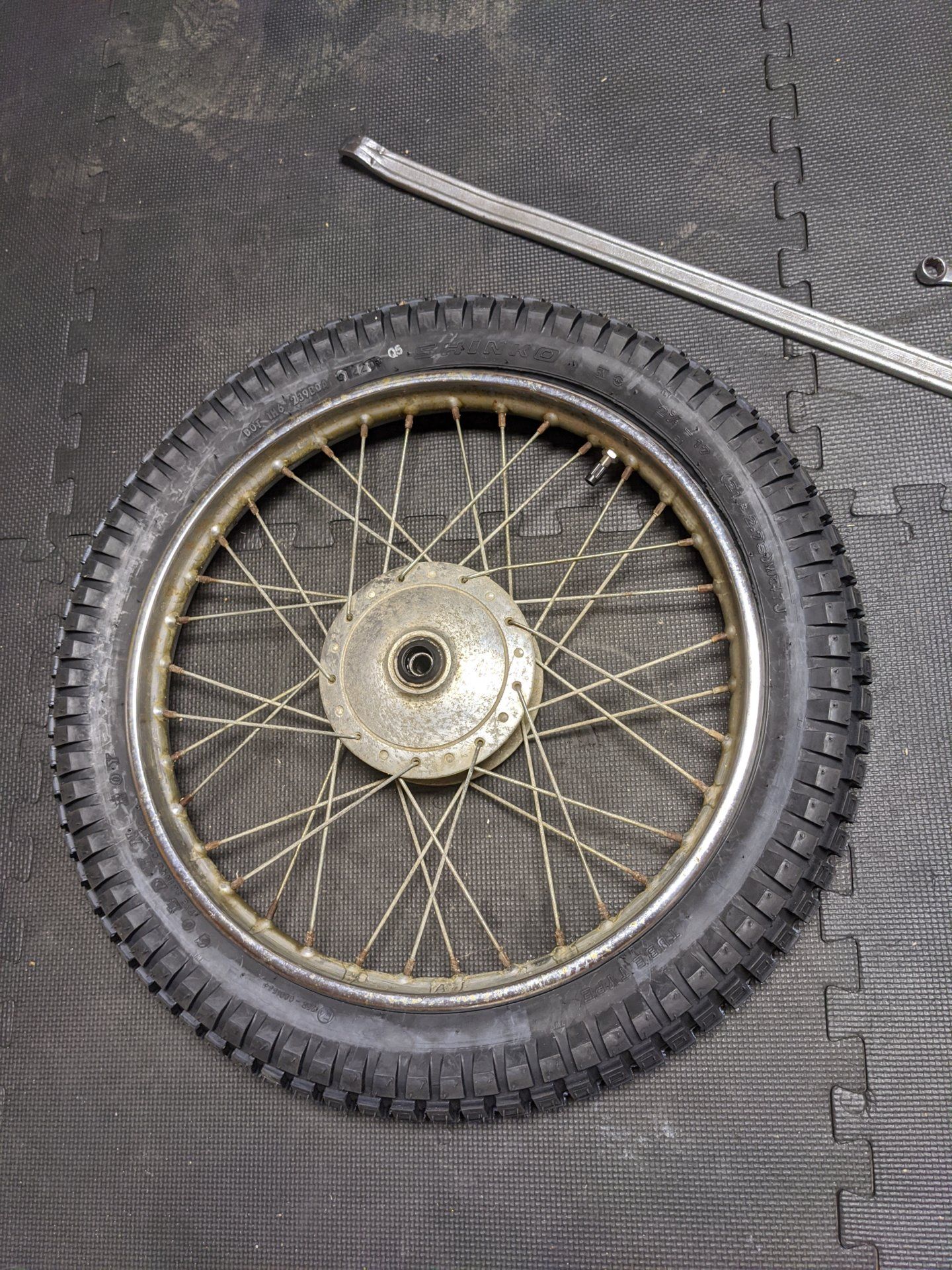 I may just go with a factory-esque paint color, since nobody makes the paint anymore, it's impossible to match it exactly, and the whole bike must be done.

The right front fork is leaking, so I suppose a rebuild is in my future on that too.

Piston rings get here Thursday, gaskets get here Friday. Maybe I'll be riding it around the yard by Saturday?

VIP
Well, new rear tire and new chain is installed. I repacked the bearings with 5 year old grease out of the tub to replace the 51+ year old grease. 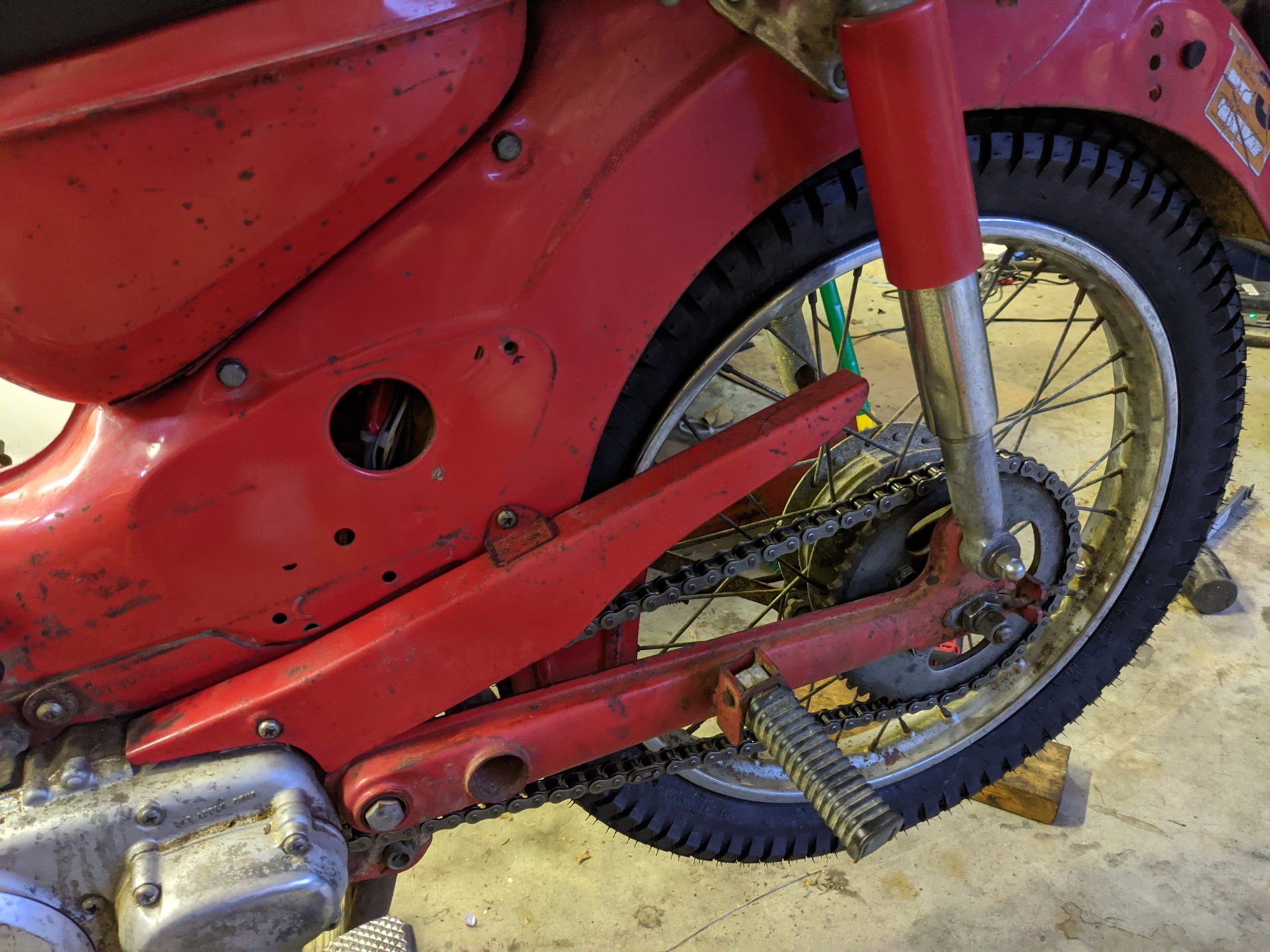 VIP
Well, the rings got shipped to the wrong part of Maryland, so they'll be here tomorrow, and it looks like Friday I can get anything done on the top end.

I did finish painting the airbox, and dang, it looks good.

VIP
I forgot to take pictures of putting it together. Oops. It's together, but I can't remember which way the petcock goes to open up... So, uh, I didn't get to ride it before we went out for dinner.

Compression immediately after assembly was 85psi, and that's with new rings and crosshatch hone, so it will probably get better with run time.

Yeah, registration paperwork was mailed out last week. I expect to get the plate and paperwork sometime in mid-july.

VIP
For the life of me, I can't get the clutch adjusted correctly... Looks like that's because someone before me messed up the adjustment, and I thought NBD, I'll just adjust it.

Nope. Starter still slips. Interesting, that's not supposed to do that.

So I tried it again.

That didn't work. So I thought, oh, ok it's probably something easy inside.

Every. Single. JIS. screw. is. Stripped.


I was too pissed off to take a picture, but it looks like this, but with more stripped screws: 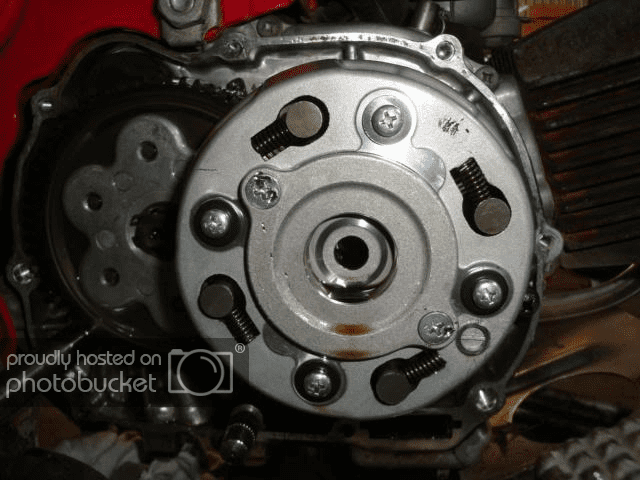 Seems like this is a common problem:
Clutch write up.
Clutch repair » thectshop.com -

VIP
I stopped by Hazzard Fraight to pick up some spring compressors, and got a new impact screwdriver, and after a few taps of the wrong way (lol) I got the front thing off: 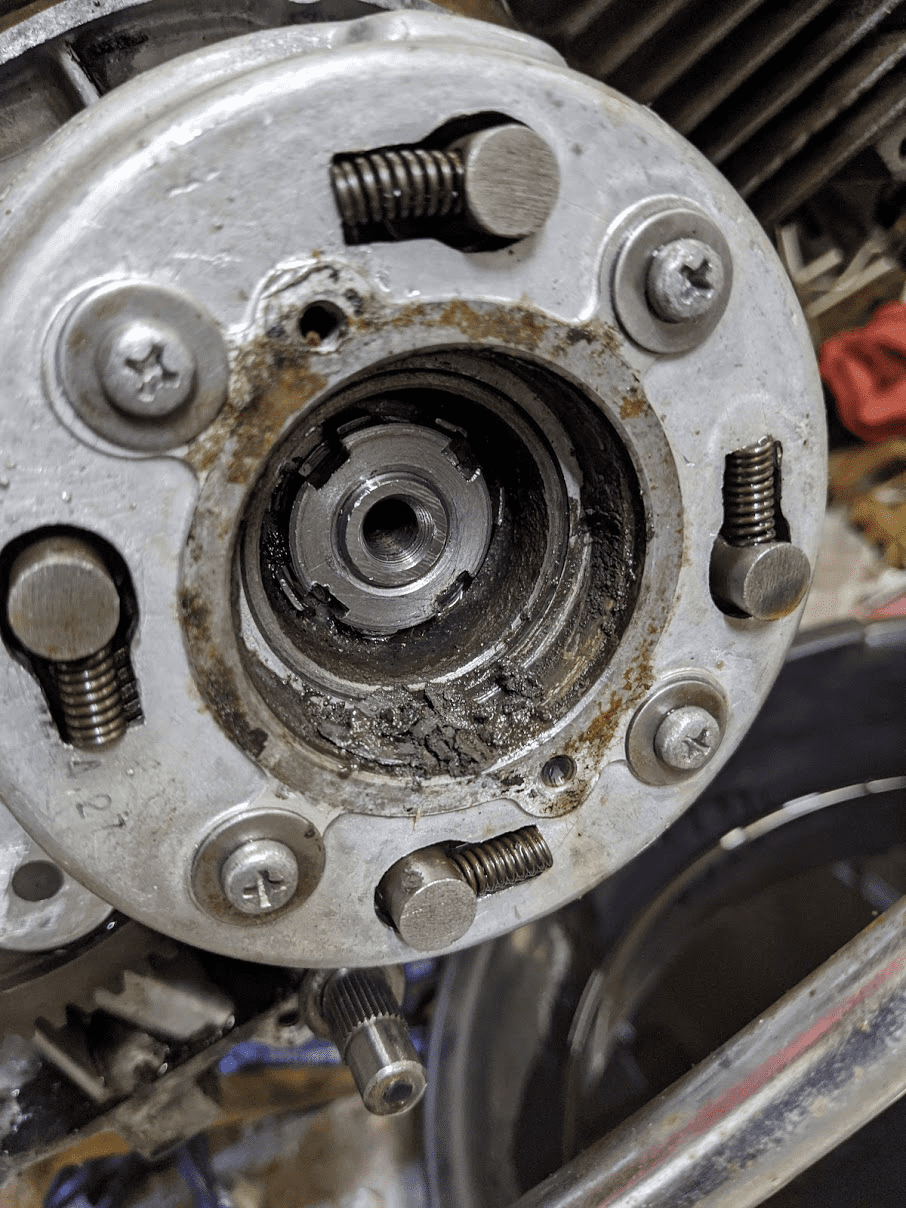 That's clutch material, It's full of it, which explains everything...


This screw being loose explains some of the noises too: Everything else in that side of the case looks fine, I removed that gear and tightened the screw to the factory torque, I'll keep an eye on it and throw some blue loctite on it, or maybe peen the head if it backs out again.

Then, I got the clutch pack open -- by hand mind you, which shouldn't happen. and saw this gem: It was really odd, there was one of those completely stripped of all friction material, and then two that had lots of material left, like this one; So, in the interest of never having to do this again, I bought this for spare parts: 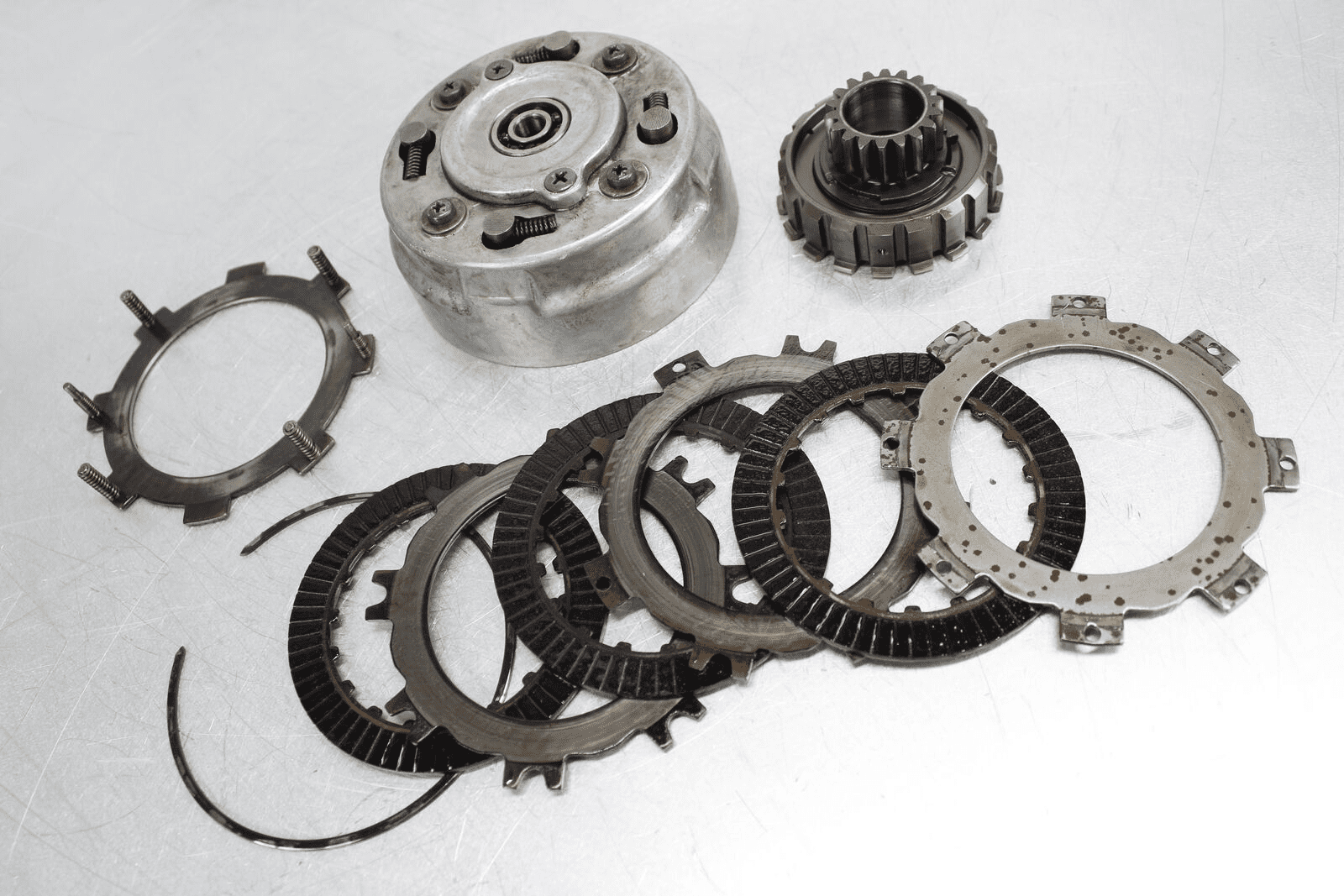 And 3x new Barnett Clutch friction discs. The used clutch assembly I bought has the late-1969 style six-springs, where two springs try to keep the steels spread apart when not under tension. It's a better design, and ultimately it's what Honda went with on everyone's favourite death machine, the ATC 110.

So, back to waiting for parts.

In the meantime, take a gander at this video, the CT110 is the 20cc larger version of mine:

VIP
Got the clutch basket assembly today and installed it. The bike runs great.

Only issue is that first gear is missing a tooth. Let's hope it's not the mainshaft and it's just the countershaft gear because the low gear on the mainshaft side is actually part of the mainshaft...

Good news is that I found a gear set, and it's on the way for whenever I get to it or get bored/annoyed. So, I suppose I'll just bump it, really quick in first get it going, then go into second, for a while, until I tear down the engine this winter for the full restoration.

VIP
It rides pretty decently too. It's nice and easy to ride on the trails in my main yard (the part that's cleared) and the lights work pretty well at night. They're not great, but they actually work quite well, even through the woods at night.

Now I'm just waiting for the gears, but I'm fully intending on driving it now as soon as the tags come. 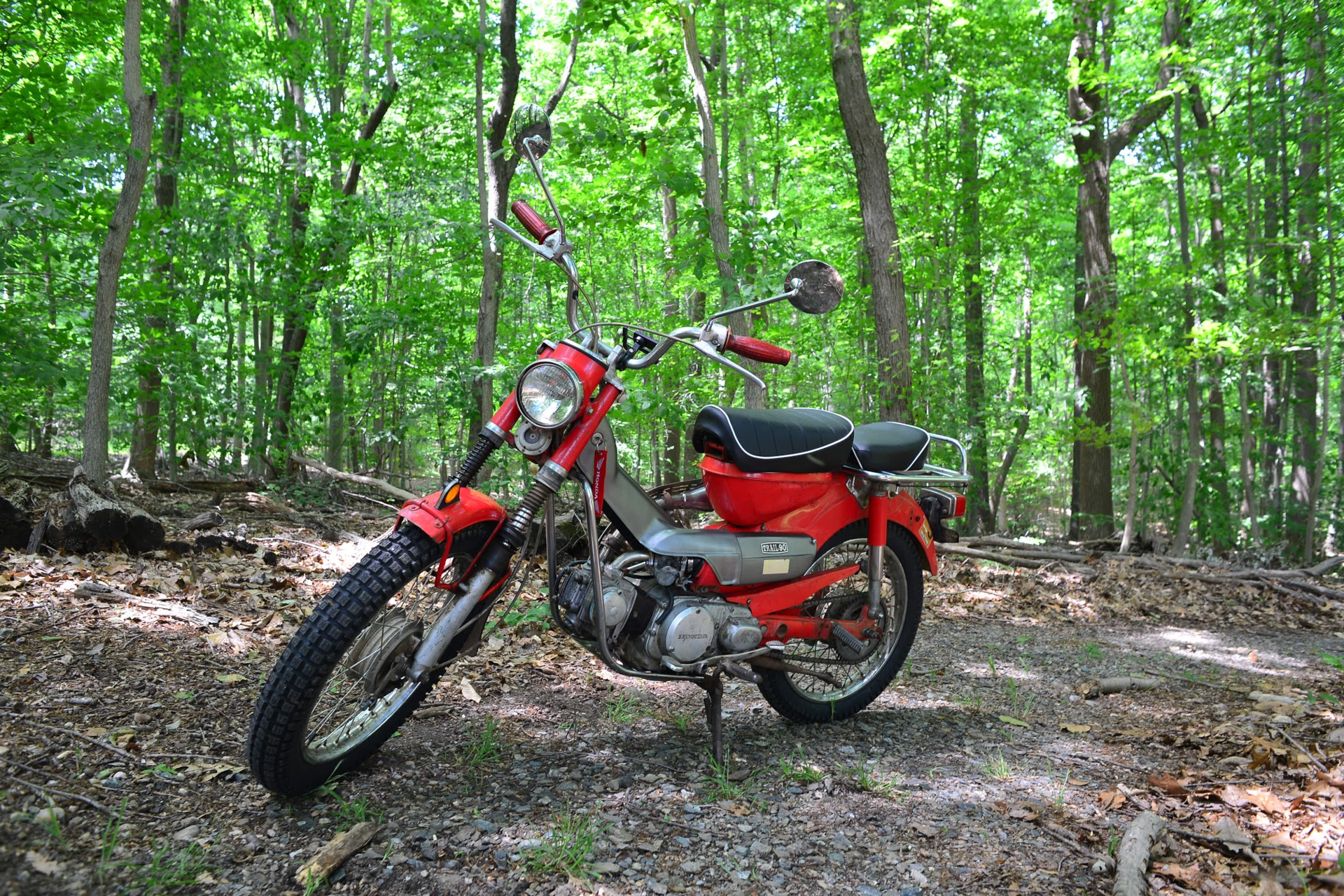 I'm gonna be sad when I have to tear her down to paint everything.

VIP
Be worth it though.

VIP
Yep, polishing the chrome sucks, but it makes a huge difference. I found a trick though: 3000 grit sandpaper.

VIP
Well, bike is down until the kickstart lever comes in. Sometime in July apparently?

The float needle valve leaked overnight, filling up the carb with too much fuel, and I started it with a little too much gas in the engine, kinda hydrolocking it with fuel. Weakest like failed, and the kickstart lever stripped it's splines. I tried to fix it, but without a purpose made broach it's not gonna happen. I tried welding new material in, tried grinding the gap between the halves out wider to give more "squeeze", and tried pinning it. Nope.

So, last night I replaced the carburetor's float needle valve, main metering needle, and went through it again. Everything looked good, and I knew I was taking a risk on the old needle valve.


Thinking I was basically done with the mechanicals, I bought some sticker/decals for the fairing, it ought to look less plain after those are applied.

I may just tear down the engine as soon as the transmission gears arrive, the more I think about it the more I think I don't want to risk breaking something important by being lazy. So, perhaps I'll take this as an opportunity to split the cases, clean everything, and completely rebuild the engine/transmission.

If I have the engine out, I might as well paint th frame too... Scope creep...

VIP
scope creep indeed.
similar thing happened to my 500ex, leaked fuel in the basement of my house.
woke up with the worst sort throat ever.
happened to me another time after it was "fixed", luckily the electric starter was not strong enough to bend a rod

VIP
Got the case split. Found my issue. Low gear happens to be on the top of the stack, so once I got it open, it was easy... But man, what a PITA to be get to that point: In other news, I found this on thingiverse, and it works quite well. I have an AGM battery instead of a flooded lead acid, because it's less maintenance and easier to deal with/replace. (And I have a bunch because my daughter has a bunch of old 6v ride-on toys.) The gear stacks arrived, so I got the gear installed, but forgot to take pictures. And now it's back in the frame. I still don't have a kickstart lever, and I don't want to mess up the kickstart rod any, so it's going to have to wait for a first ride until tomorrow evening if the weather is good.

Maybe I'll push start it, but I'd rather not do that in 89°F with 80% relative humidity out here right now... It's pretty gross outside now, and I'd rather stay inside, even though our HVAC is broken.

I did get a "Year Of Manufacture" license plate off eBay, because Maryland has this program where a historic vehicle can use a plate that expires in the year it was made, if you pay tribute to the state. Should be interesting when I transfer it from Vermont to Maryland and then use this plate: