Moderator
VIP
So once upon a time, I used to work doing repair work on coffee equipment. I liked the work but not so much the job as espresso machines was only a small part of it. I've been wanting to find a project and finally decided to pull the trigger on an old Astoria CKXE that I found for a decent price, not great, but decent. I wanted a rotary pump machine as I don't personally have much love for vibration pumps and also wanted a prosumer type of machine to replace my Breville that I have grown weary of.

Unfortunately, the machine was damaged in shipping as it was packaged by fedex in just a cardboard box, it weighs about 75lbs, with nothing for the base to rest on. Luckily, the seller was great and we worked out a partial refund and I was comfortable with keeping it, if it doesn't work out then I will use it as a parts donor. Primarily the damage is a large dent in the top corner as shown in the pictures, ruining the front panel and the corner of the top, and the bottom frame where the drip tray should be is bent upward. I think I may be able to get it bent back just enough to work fine, maybe. All of the legs got bent in the frame as well, the rubber feet aren't in great shape so I will replace them, unfortunately I will have to drill out the mounting holes and mount them in a different manner as the steel panel on the underside is bent where the legs mount in. The shipping damage has definitely complicated the matter of trying to fix it, but time will tell if its fully salvageable, mainly the warped front frame is the concern. 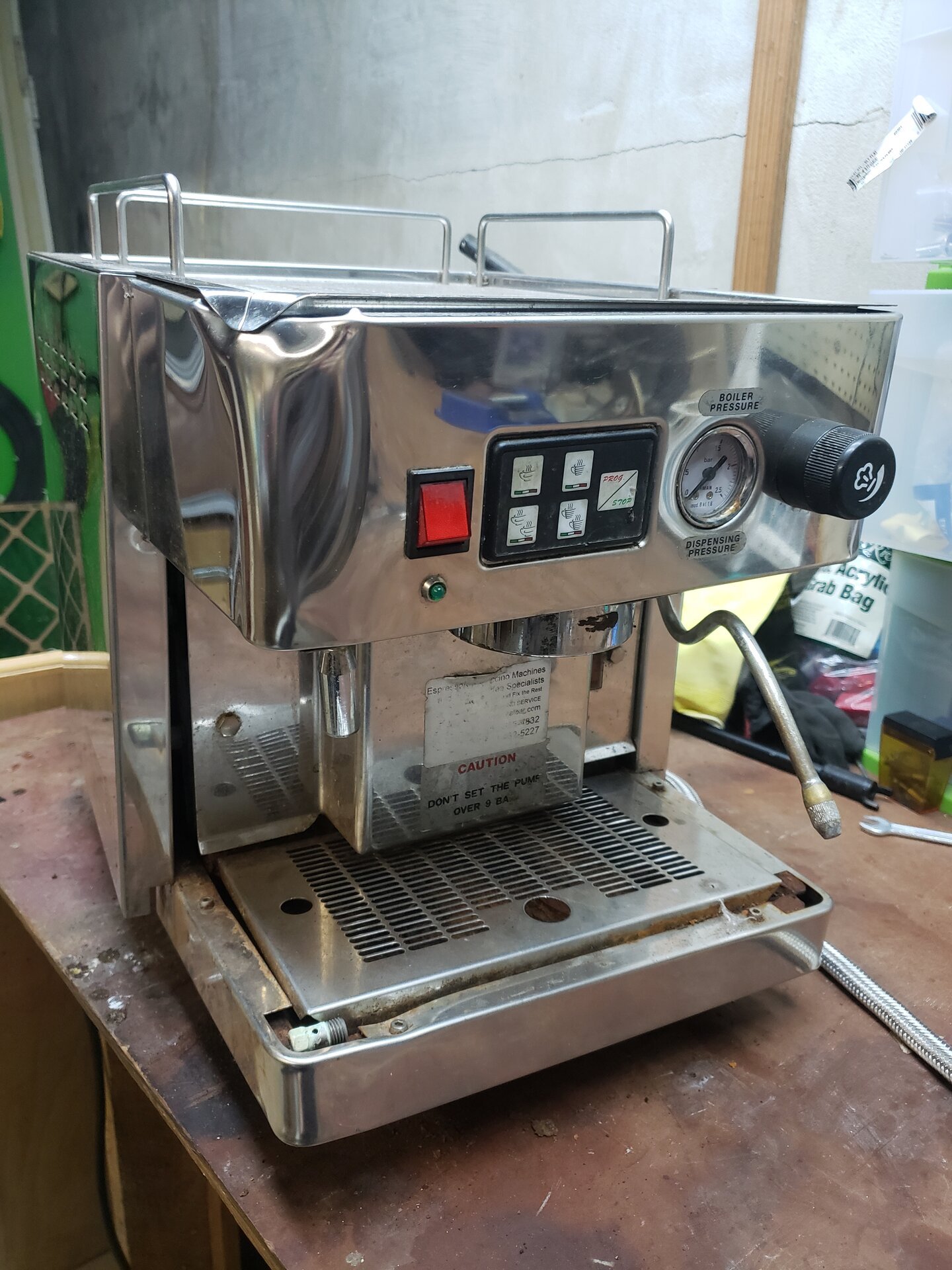 Thankfully, the inside looks pretty clean and everything looks to be accounted for. When plugged in, the power switch lights up, and pressing the dispense button activated the solenoid valve but the pump did not engage, not unexpected, it was sold as not working. This was not connected to a water supply when checking this, the power test was only about 5 seconds before shutting it back off, more testing will be done once water is connected. I removed the pump from the motor and it was not spinning at all, got that loosened up and free spinning and set aside. 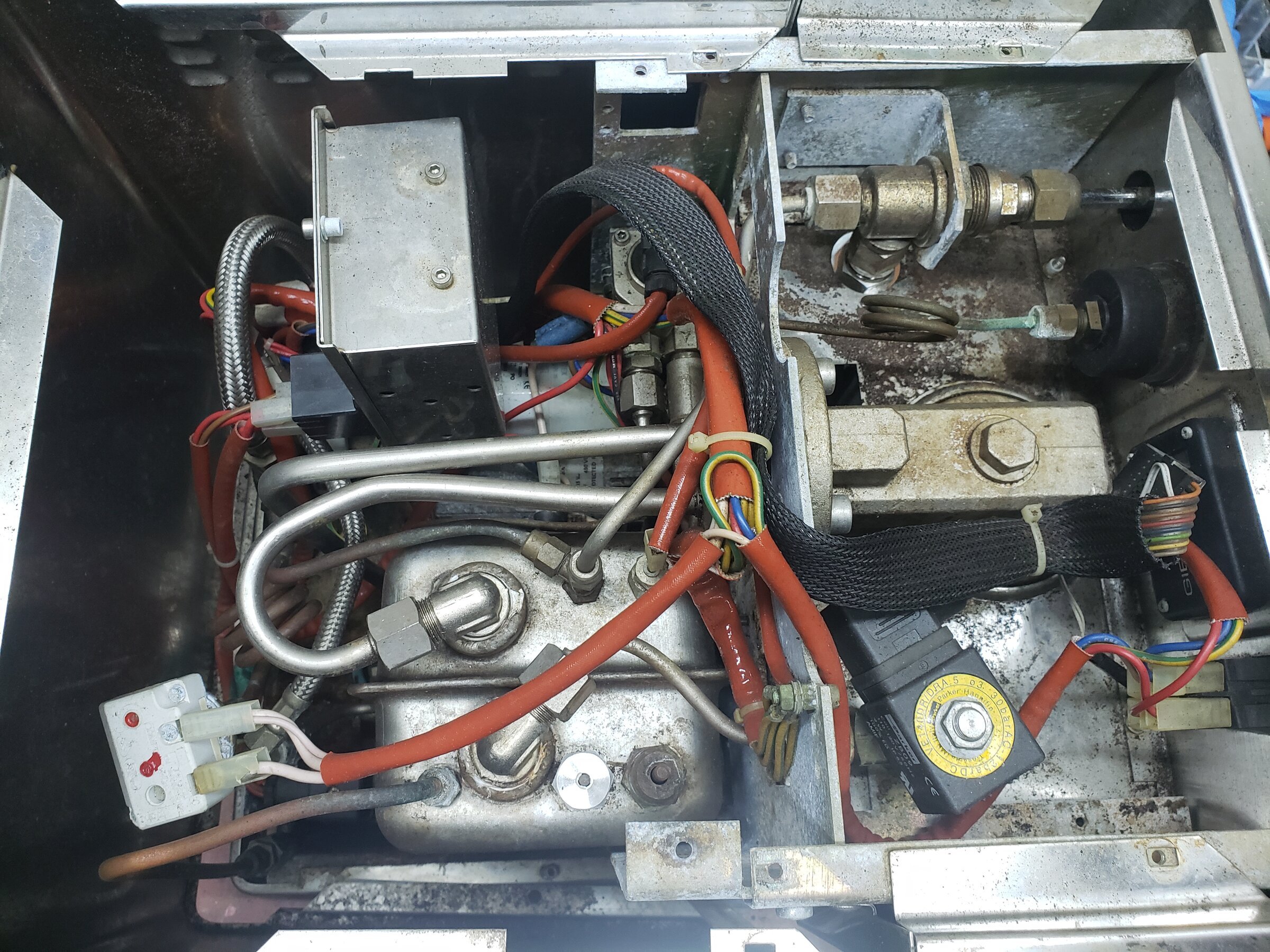 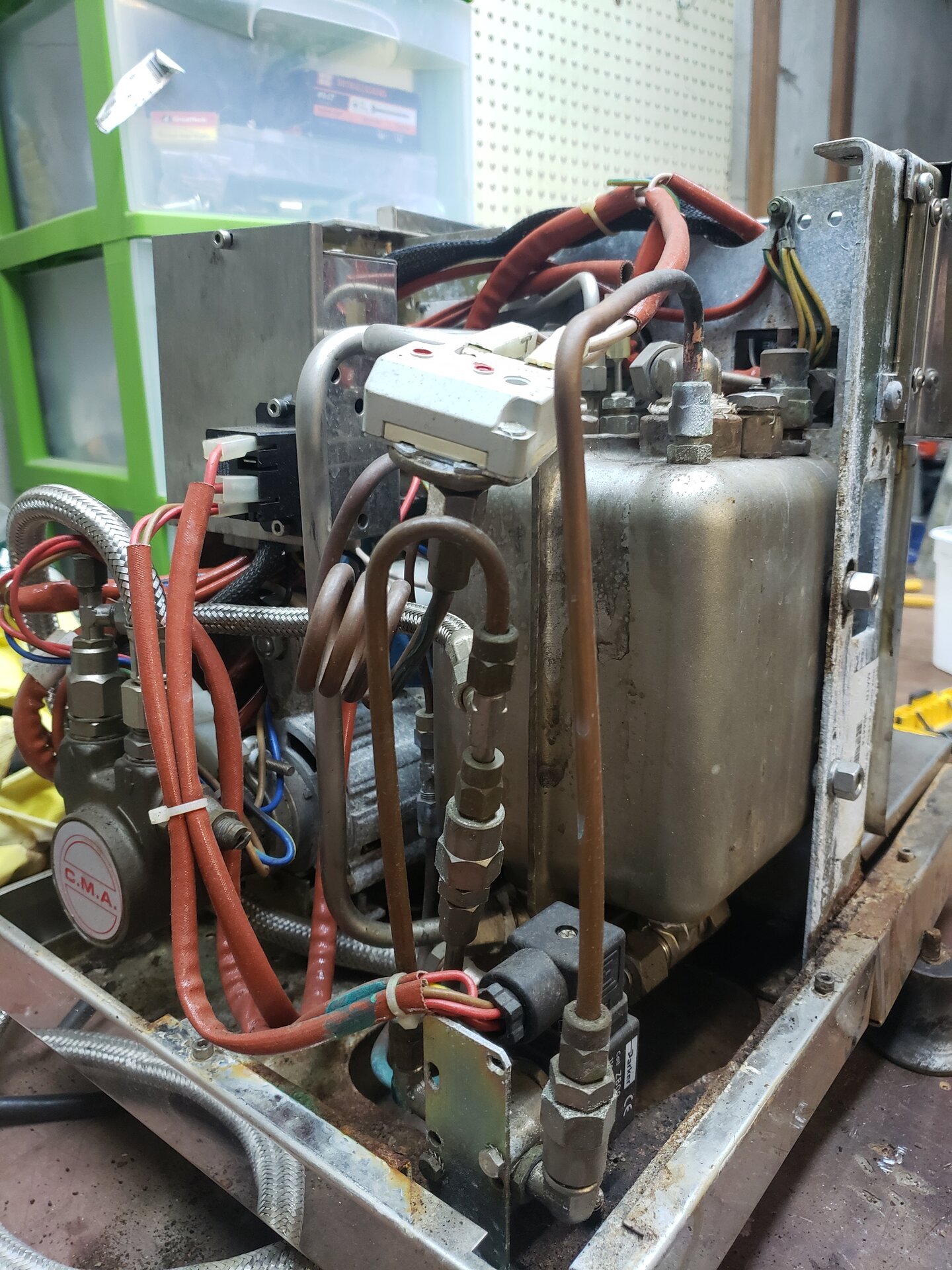 Next picture shows the state of the drip tray area, it looks as though this machine was used quite a bit while missing the actual drip tray. I lost a little hope after removing the drip tray cover and the front panel thinking that the whole frame here was rusted through, but once I started vacuuming it out the "rust" came off easily and smelled like absolute hell, I'm pretty sure this was layers of milk and coffee that have dried over time. The last pic shows how well it came off with only gentle persuasion, there is hope. 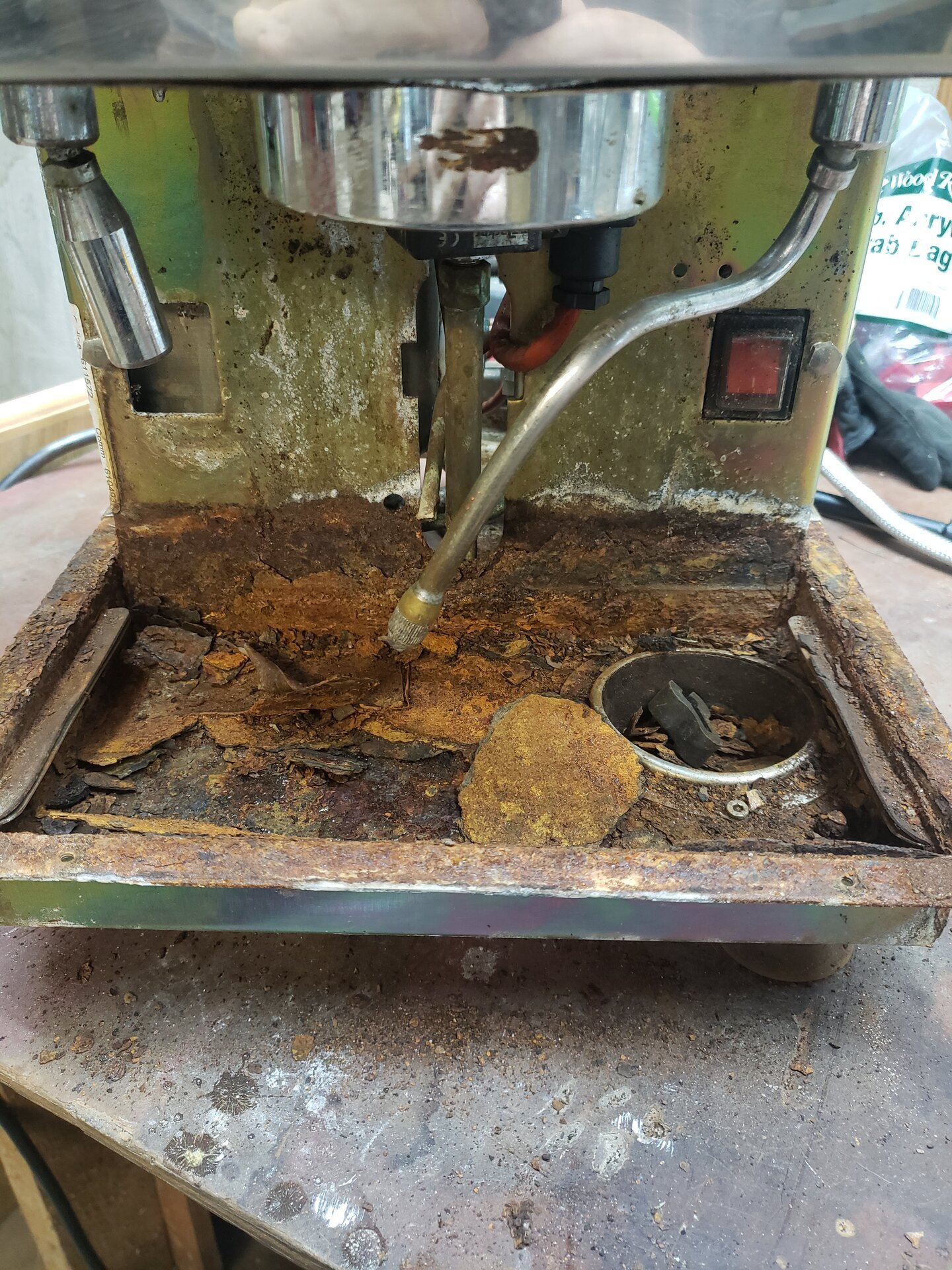 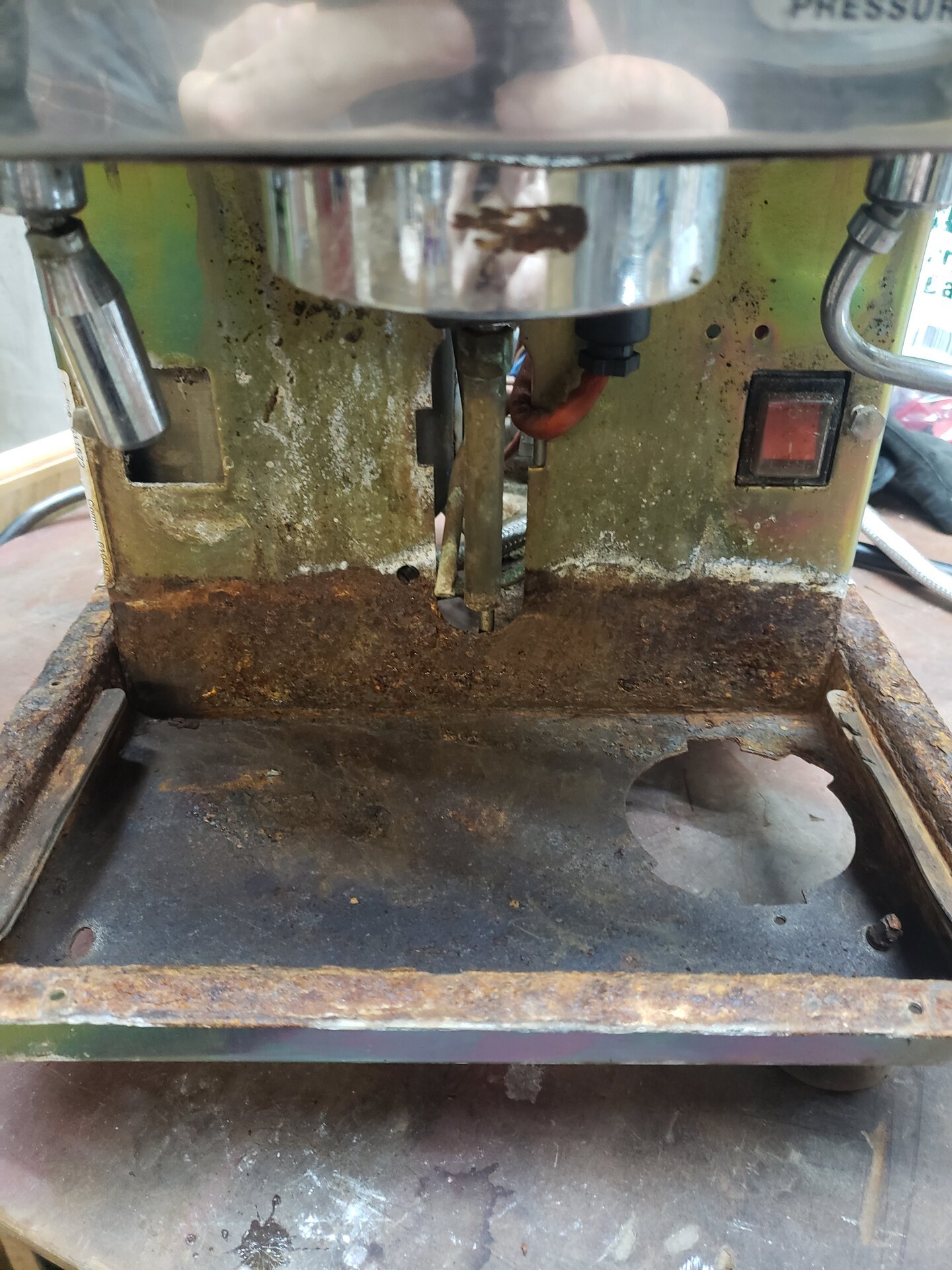 That is where it stands now, this will be a slow moving project as my first goal is to get it working, then I will dismantle the whole and thing and sandblast the frame and soak everything in de-scaler and replace all of the seals and gaskets, still need to test the heating element as well. Luckily the rear body panel looks to have suffered minimal damage and is in good shape, a little polish and it will look great.

I'll enjoy this project as it can be done in my basement, comfortably standing or sitting on a stool at the workbench. No climbing, crawling, or crowding around a car in a small basement garage and no dust and extended cleanup like the wood working stuff. Can't do much woodwork in the basement as the dust may not work well with a gas powered furnace and water heater down there, don't want to risk anything. This is nice and compact and only issue will be any water leakage which can just be shut off and cleaned up enough to dry.

Plan is to try and hunt down the body panels, mainly the drip tray, and try to hammer the current ones straight. Make new legs out of some oak I have and just make it function. Want to replace the current steam pressure gauge with a dual pressure one so I can see the pump pressure while making espresso

Admin
VIP
Cool tinkering. Is there any money in this industry? seems to be something most people wouldn't even attempt.

Moderator
VIP
There may be money to be made, plenty of companies that specialize in coffee repair but the focus and main part of the work are the brewers and grinders. They're really boring to work on, not much challenge once you learn them and the typical problems that cover 99% of service calls. Most money would be in selling and installing the espresso machines since a good commercial machine can run anywhere from $5,000 to over $20,000 depending on the brand and size. Just like any appliance repair really, just need to have the van, tools, and a large inventory bc there are a lot of different brands and models that are out there. Personally, i hated the driving to restaurants and cafes, going into all types of gross places and working filthy machines in the middle of them trying to serve and work. I preferred the in shop bench jobs and doing full tear down and rebuild stuff, but that rarely happened bc people didn't want to spend that kind of money or didn't know it needed that much work.

The espresso machine side can be pretty hazardous though if you don't know what you are doing. The steam tanks are sealed, pressurized systems that deal with super-heated water around 260degrees. So if you screw up they can explode with enough force to throw the machine through a brick wall, it has happened, but you'll get the shit burned out of you regularly. Plus you're playing with an electrical machine that uses water and whole lot of pipes and valves so getting a good shock happens too. I 've seen one machine break the heating element inside the tank, 250volts that was now grounding through the water and energizing the entire machine, the barista called me and said every time she ran a shot she felt funny, almost sick. That was a bit scary. Normally if the element shorts out like that it causes the machine to overheat, blow the safety valve and shut down.

VIP
cool project!
it kinda looks like the insides of a pellet stove i worked on recently.

Moderator
VIP
So, after spending some time testing, so far most all of the important parts are testing good. Was sold as a non-working machine that would not power on, but it powered up on the first go, but nothing really happened after that. Un-seized the water pump and it works just fine, motor spins and it pumps water. Only thing that I have found bad so far is the pressurestat is bad, so its not enabling the element to power up to heat the water. Looking into different options now, either replace the pressurestat or do a PID temp controller, this tank does not seem to have an easy option to put a temperature sensor in it though, so will have to debate on that since I'm not sure I'm comfortable drilling a hole in the tank.

I've emailed the manufacturer's US division to see of the body panels can still be purchased, hoping they can be as the prices aren't that bad compared to what I had expected. If not then I plan on making them out of wood and using a good epoxy or marine grade sealant that can handle a little bit of heat. Probable going to start the tear down and clean-up soon.

Moderator
VIP
manufacturer had the upper panel and the missing drip tray in stock, only 1 of each, thankfully this isnt an ancient machine, is discontinued though. I managed to get the corner of the top cover bent back to good enough shape so I didn't have to order that. Still trying to figure out the way to go with pressurestat vs pid, then will commence with a tear down.

VIP
Not something I would take on as a project but I can appreciate it nonetheless.

What are your plans for this thing after you refurbish it? I drink a whole lot of coffee but not espresso. Seems like overkill for the typical household. Is there a potential to sell it and break even or possibly make a small profit? Can't imagine too many places are doimg this type of work.

Moderator
VIP
I plan on using it at home. I don't drink a whole lot of coffee (1 cup per day if nothing is going on), but when I do I love using these types of machines. My current machine is a Breville with a built in grinder, BES870xl I believe. It makes a drinkable coffee as long as its a milk drink, but takes forever to steam milk and is super loud. I'll be able to sell the breville and break even on this project. But if I decide to sell, I'll make money on it easily, retail on this model is around $3,000. new. One site has it listed for $2200 but has been "sold out" with an email sign up for a long time. I also have a Mazzer grinder that I refurbished a while back as well (sells used for about $600-800, I have about $80 in it) that will be paired with this machine. So it will be a legit setup once it is done.

VIP
Very cool project. I really kinda want to get an older espresso machine, but I've already got two, so there's no real need for it, lol.

VIP
Did you ever finish this project?

Moderator
VIP
I have made progress, but nothing finished yet, need to get on it though.

I have completely disassembled the machine. Sandblasted and painted the frame as well as got it straightened up from the shipping damage.

All the internals have been soaked in a descale solution to clean out the build up, the machine came from FL and the tank had a bunch of sand in it, that was a first to see.

I have all the parts in now that I think I will need, I found a dual gauge to replace the single that only gave tank pressure, but need to find the correct sized line and fittings to connect the pump pressure gauge. Pretty sure it is 1/8' copper tube and most likely british pipe thread so the american stuff wont work. Also need to make the hole larger to fit the larger gauge.

I spent a good portion of last week cleaning out the basement and will be cleaning up the work bench this week, then will get this thing put back together.

VIP
cant wait to see the dark covfefe.
You must log in or register to reply here.