â€œEarth Dreams Technologyâ€ is a next generation set of technological advancements which greatly enhance both driving performance and fuel efficiency at a high level, using as its base advanced environmental technologies to pursue the joy of driving unique to Honda. It is a series of measures in which efficiency of internal combustion components including engine, and transmission, as well as electric-powered motor technology, is further improved.

Through its implementation first in the mini-vehicle N BOX and gradually onto other vehicle models, Honda aims to achieve top-of-industry fuel efficiency for every category within three years, while simultaneously setting a timeline of 2020 to reduce by 30% CO2 emissions for all products sold worldwide, relative to emission figures for 2000. 【660cc class engine】
・Employs DOHC and VTC (Variable Timing Control) to improve intake efficiency.
Further, the compact combustion chamber realizes high thermal efficiency.
・By shortening the bore pitch compared to the present engine models and reducing the thickness of the cylinder block and camshaft, engine weight is reduced by 15% and
fuel efficiency is improved by 10%.

【1.8 to 2.0L class engine】 ・Employs direct injection technology and the Atkinson cycle using the DOHC, VTEC technologies as the base. Further, implementation of VTC and high-capacity EGR to both the intake and exhaust ports realizes significantly reduced friction. ・For the 2.0L class hybrid vehicle engines, use of an electric water pump eliminates the need for a belt in the auxiliary device and contributes to a reduction in friction. The electric VTC system realizes optimal control during engine operation. 【2.4L class engine】
・Based on the DOHC and VTEC technologies, it employs VTC and direct injection technology and implements extensive friction reduction measures.
・Standalone engine features 5% improvements in fuel efficiency and output as well as a 10% improvement in maximum torque.

【3.5L class engine】
・Employs new valve train mechanisms and direct injection technology in the SOHC, VTEC, VCM systems to improve by over 10% of fuel efficiency and 5% of output, relative to the present standalone engine model.

2. A worldâ€™s lightest diesel engine which realizes top-of-class acceleration performance and fuel efficiency.
・Through optimizing engine rigidity and combustion pressure, an aluminum open deck for the cylinder block was enabled in this top-of-industry lightweight 1.6L class diesel engine.
・By downsizing from the present 2.2L engine and extensively reducing mechanical friction in each section, a friction level equivalent to present gasoline engine models was achieved.
・Optimized thermal management system thanks to improvements in the cooling system reduces CO2 output by over 15%.
・Employment of a compact, high-efficiency turbocharger and weight reduction in the reciprocating sliding section realizes a sporty and nimble ride.

3. CVT which combines at a high level the fun of driving and fuel efficiency.
・Three CVT structures for mini, compact, and mid-size vehicle classes are newly developed to be adopted for a variety of engine models. ・Reinforced belt is used to realize a structure for which a wide ratio range can be set.
・Implementation of analysis technology over the contact behavior between the belt and pulley, and a high-precision hydraulic control system allows for continual optimization of hydraulic pressure to the pulley under a variety of driving conditions, contributing to improved fuel efficiency.
・Use of an electronic oil pump to realize an idle stop system with high response contributes significantly to improved usability and fuel efficiency.
・â€G-Design Shiftâ€, a new coordinated control system for shift transmission, throttle, and hydraulic control responds quickly to driver demands and realizes an exhilarating, sporty drive with superior acceleration. ・In the mini-vehicle class a control mechanism and innovations in axle placement to reduce the engine size lengthwise, while a reduction in parts by simplifying the transmission casing structure helps realize a lightweight and compact body.
・For the compact and mid-size classes, in addition to the reductions in size and weight, transmission efficiency was greatly improved by expanding the ratio range to achieve fuel efficiency improvements of 5% and 10% compared to the conventional CVT and comparable 5ATs, respectively.

4. A two-motor hybrid system which realizes top-of-industry efficiency.
・A two-motor hybrid system featuring top-of-industry efficiency enhancing driving performance and reduced CO2 emissions has been newly developed.
・Special lithium-ion battery and charger is employed to enable mounting on plug-in hybrid vehicles. ・Mid-sized vehicles equipped with this system are scheduled to begin production, starting with the plug-in hybrid model in 2012 and the hybrid model in 2013.
・Three driving modes allowing for optimal efficiency for various driving environments were developed; an â€œEV driving modeâ€ for urban environments, a â€œhybrid driving modeâ€ using electricity generated by the motor, and a â€œengine-connected driving modeâ€ where the engine and tires are mechanically connected during high-speed cruising.
・Combination with a high-output 120kW motor allows for superior environmental performance and driving enjoyment.

5. A high-efficiency, high output electric SH-AWD hybrid system which combines superior driving and environmental performance.
・A new hybrid system, electric SH-AWD, was developed for large-sized vehicles. By combining a 3.5L, V6 engine with this hybrid system, acceleration equivalent to V8 engines, as well as fuel efficiency equal or superior to in-line 4-cylinder engines were realized.
・An electric 4WD system with independent 20kW+ motors on both sides for the rear wheels combines a 7-speed dual clutch transmission system with a built-in 30kW+ high-efficiency motor with the engine.
・By mounting a high-performance lithium-ion battery and optimally controlling the front and rear motors, a newhybrid system with high fuel efficiency and output was realized.
・By mounting two independent motors in the rear and employing a newly developed bilateral torque adjustable control system, incredibly tight â€œon-the-railâ€ cornering is realized, providing a stable ride for all daily driving environments.

6. A compact, high efficiency electric powertrain for EVs.
・Thanks to the high efficiency coaxial motor, low-friction gearbox and electric servo brake system, the system realizes the highest electrical consumption capabilities in the world, meeting the required AC consumption rate of 29kWh/100mile(116MPGe) as set forth by the United States.
・A traveling distance of 123 miles*1(LA-4mode: unadjusted) or 210km*1(JC08 mode) was achieved thanks to the mounting of a high capacity lithium-ion battery.
・When using the 240V U.S. electric source, a full charge takes less than 3 hours. (From the time a low-charge signal is lit till full charge)
・By offering three driving modes (SPORT, NORMAL, ECON), the driver can freely select from a number of options to meet the needs of various driving styles such as power-saving or sporty drive *1 According to Honda estimates 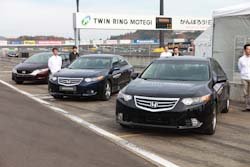 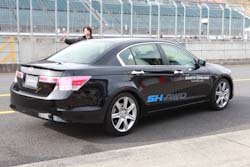 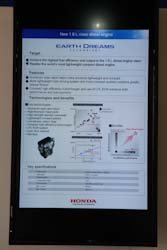 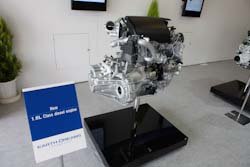 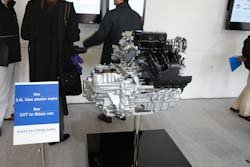 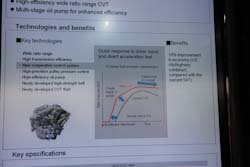 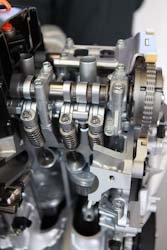 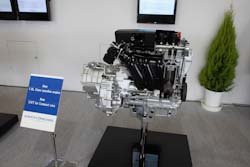 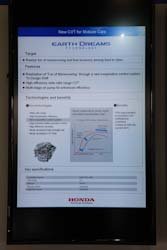 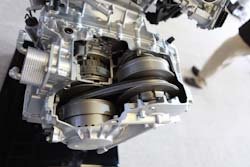 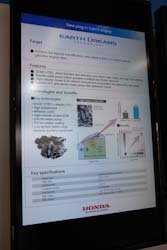 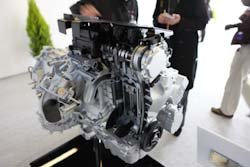 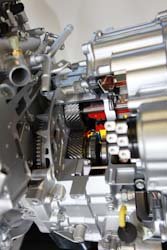 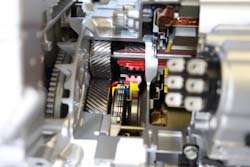 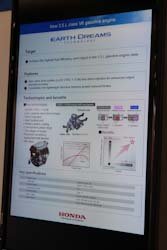 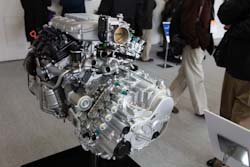 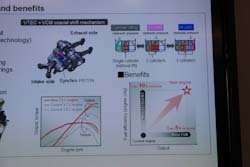 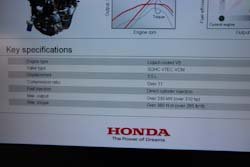 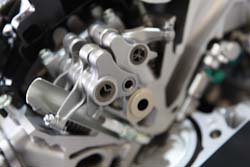 Admin
VIP
So they have to come up with a fancy name now that Mazda has SkyActiv?

VIP
I sure hope this doesn't mean they're shit-canning the manual transmission.

I bet it's this big:

VIP
Americans want a sub 6 second 0-60 time in a sedan with leather heated and cooled seats. If it doesn't run below a 15 second 1/4 mile, then they don't want it.

Americans don't think, they know, that diesel engines are slow, dirty, and noisy. There's no changing that perception because every semi truck belches black smoke, gets in the way of stop-light drag races, and makes a lot of noise.

awptickes said:
Americans want a sub 6 second 0-60 time in a sedan with leather heated and cooled seats. If it doesn't run below a 15 second 1/4 mile, then they don't want it.
Click to expand...

Yes, yes, then we all stand around and bitch about how horribly expensive gas is, and how our cars should be more efficient.

VIP
Bring that little engine to the states, sell it in a little 50mpg non-hybrid with no frills for $7999 'fully loaded', and watch it become the most popular car in the country.

Play with the throttle rates and 90% of the folks who buy it won't ever notice it's slow.

awptickes said:
Americans don't think, they know, that diesel engines are slow, dirty, and noisy. There's no changing that perception because every semi truck belches black smoke, gets in the way of stop-light drag races, and makes a lot of noise.
Click to expand...


Part of getting your license in America should include being flown to Germany to drive on the Autobahn, and to witness that most of the cars flying by the petrol station, and hauling ass down the Autobahn, are diesel.


Matts96HB said:
Yes, yes, then we all stand around and bitch about how horribly expensive gas is, and how our cars should be more efficient.
Click to expand...


I swear, it's ridiculous how many people accelerate so that they get to the red light to stop faster here, it's truly amazing.

92b16vx said:
I swear, it's ridiculous how many people accelerate so that they get to the red light to stop faster here, it's truly amazing.
Click to expand...

I've noticed this as well. I've had people floor it and pass me coming to a red light.

I love it how people mash the pedal to the floor when the light turns green, and swerve around the car in front of them to go 10mph over the limit then have to stop at the next light.

Matts96HB said:
I've noticed this as well. I've had people floor it and pass me coming to a red light.

I love it how people mash the pedal to the floor when the light turns green, and swerve around the car in front of them to go 10mph over the limit then have to stop at the next light.
Click to expand...

People do this to me when I'm on the motorcycle. It's funny to see when try to comprehend that they're going faster than a little motorcycle in their SUV.

I got a line on a job. Manhattan, Director I.T. Anyone interested ?