VIP
So long story short my friend and I were driving a total of 8 hours to pick up and bring home the new motor for his RSX, and among other things we were discussing my H swap, which hasn't moved, and what I could do with it. His first car when he turned 16 was his step dad's old 1996 Accord Sedan LX and that car and chassis (cd5) has a special place in our hearts. And then the Honda kids realized. H22a4 swap. Into a CD5. For his wife (she wants a "fun car" but with 4 doors for practicality).

I have searched a fair amount of threads some of which on other sites can't be found, others which don't really have information on actually doing the swap, just with some speculatory remarks.

From my research I've pretty much gathered that it's a straight up swap, that requires some wiring. But I haven't found any details ON the wiring.
Whatever happens we will prospectively be using a:
H22a4 swap (complete from when I dropped it, harness, intermediate shaft, etc) out of a 2001 Prelude Basemodel.
1996-1997 Honda Accord Sedan (Cd5 I believe its called in the States)

My main questions:
Whats the deal with the wiring? If we get an accord with the single cam VTEC motor, will we just be able to chip the old ECU and run everything stock?

I read you can use the Accord intermediate shaft if you want to keep your accord axles which would be cost effective, but can they handle the extra strain of the H22a4's power?

Is there anything I'm missing or is this as simple as it looks?

EDIT: In exchange with you guys putting up with me I'll do a complete writeup on the swap if it happens

VIP
Accord Axles should be fine for basic street tires....but not slicks.

Maybe you can talk to your tuner about the ECU...it should be something he can handle. But I'd prefer to run the virgin H22 ECU for the respective motor.

If Accord is already VTEC....wiring should be easier. I've never done the swap but I figure the only wiring issues are sensors that need to be added (and/or deleted in tune if using a tuned chip) and the distributor wiring may need to be repined (or use H22 plug and repin to you harness). I figure you could download some Helm's Manual (for the H22 and the Accord) and it will help with wiring.

Admin
VIP
chipped p13's is difficult because of the immobilizers. you're better off running a p72 (gsr because it also has iab control like the h22 has) chipped for the h22

obd2a to 2b is pretty easy provided you have the end clips from the donor car, which you will. it's a cut/paste effort but not too bad.

VIP
So that would require a jumper harness to run the p72 with the accord harness?

Admin
VIP
p72 comes in both varieties of obd2a and b. find the right one that plugs into the car chassis.
the major difference is the IAB activation is polarized differently. can't remember which way off the top of my head, but they switch it from + to - or NC to NO in obd2a vs 2b

VIP
Makes sense. They're still mulling it over we're currently putting a motor in his DC5 so it wouldnt make sense for a bit.

VIP
Found a likely candidate, 1997 Accord EX, 135k on the chassis, nice black paint, gray interior, 5 speed. The DC5 swap is completed so this may end up being the next WFI project.

So the plan (motor has 300k miles) is to run this motor till it quits or we get the h23a swap ready (whichever comes first). I've been researching like crazy and it appears that the crank positioning sensor won't read on the jdm motor so you have to transfer the stuff related to the timing belt from the accord motor... BUT we'll be running this car OBD1 and if I recall correctly OBD1 doesnt look for O2 sensors, crank sensors or knock sensors so it shouldn't be an issue right?

[Edit to the above statement about OBD1] Tony over at RealStreet in Orlando said from personal experience you just have to rewire the vtec, injectors, and distributor and it's a very easy swap.

Parts to reuse:
Accord Intermediate Shaft
Accord Axles
Accord engine harness

VIP
OBD1 Hondas do have a primary (before catalytic converter) O2 sensor. Also, OBD1 H22's have a knock sensor.

Here's some information about OBD1 H22 Accord swaps. It is a large part of the information I used for my swap back on 2006.

Also, there's an auto to manual timing belt tensioner conversion you can do. Honda Tuning had a full parts list for that, but I can't find a link for that now.

VIP
If I'm running a P28 which is not originally for the H22/3, would it still look for the knock sensor? Seeing as OBD1 D Series motors do not

VIP
This is a small but handy guide for VTEC/IAB/Knock:

VIP
Awesome so from that chart the P28 is just vtec no iab or knock. makes life easier for sure.

You know knock sensors arent bad lol... without them you can be getting knock like crazy and still advancing timing aka boom

VIP
So the CD5 he bought was eaten with rust... I let him look at a car and buy it by himself and it didn't go so well. So we went to look at another one, found out it was so cheap because they never mentioned it didn't run, so i diagnosed the fuel pump and fortunately a swift kick to the gas tank fixed whatever bad connection was going on in there and we got a beautiful silver 96 CD5 manual for 600$ which is a great price around here. he bought his turd for 1700 and we can't use it because the frame is rusted out. The swap should happen in a few weeks.

VIP
I think my phone uploaded it sideways again... ah well. Sorry for the strain on your neck. Bone stock factory panels all around except the rear bumper. The car he got for 1700 at least had nice wheels and seats so we're gonna swap those out and try to sell the other one when this one is built and driving. The silver one is the one we're building the green one had been used to put wave runners in the ocean and the salt water ate up the rear 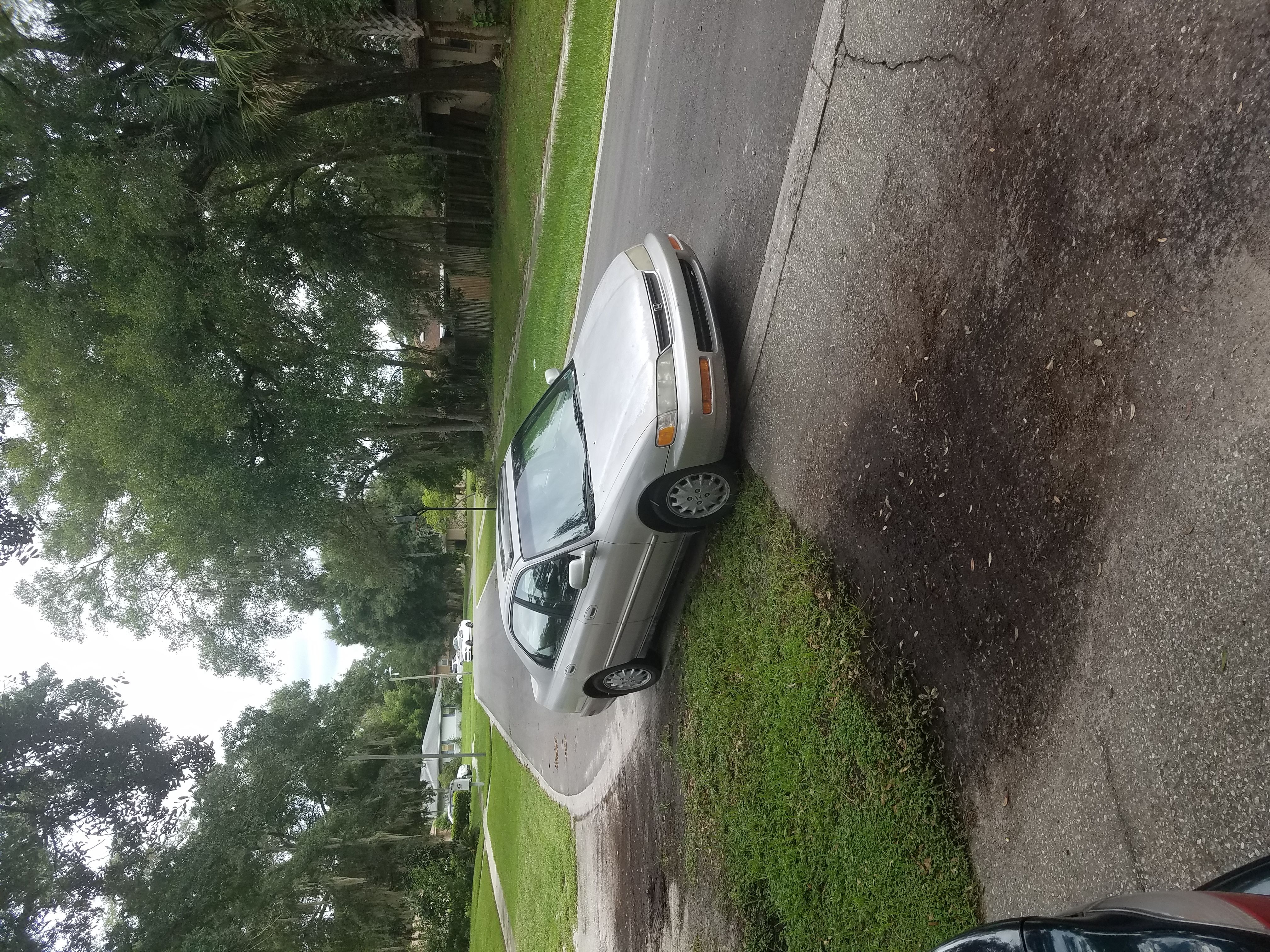 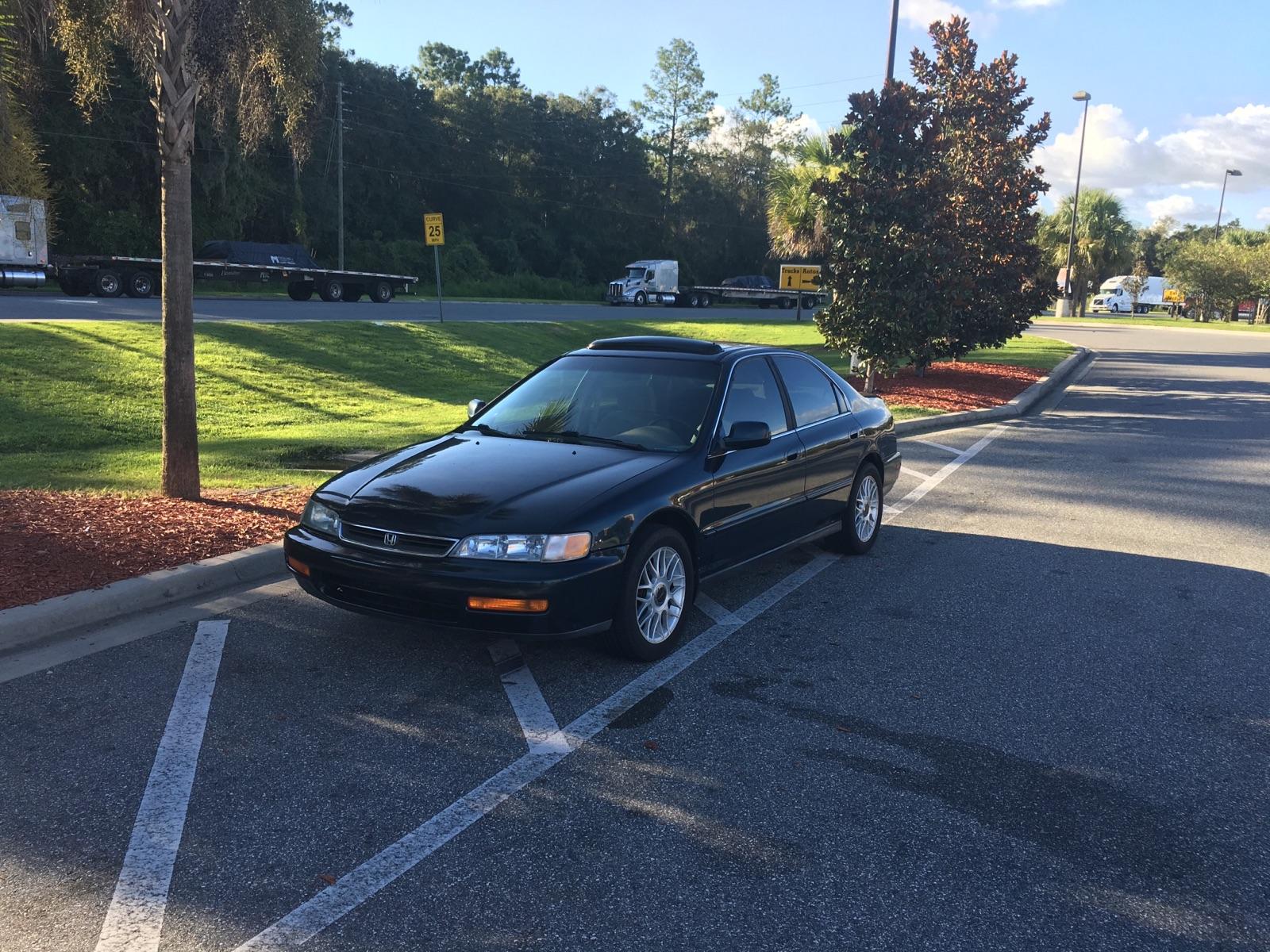 Good project though, I bought my sister her first car and its a 95 accord ex, has like 320k on it now only done a timing belt and water pump and regular fluid changes, even has ice cold ac that will run you out of the car , only thing that sucks about them like any 92-00 honda the window tracks suck balls

VIP
yeah the green one has 306k and runs like a champ even though it has no rear framerails. I drove it ~3hrs home while he drove the silver one on some back roads and it handled and drove beautifully aside from a sticky accelerator and shaky brakes. Absolutely nothing wrong with the motor though.

The silver one has 230k and drives even better, I drove the car before he bought it and everything felt beautiful. I'd have no qualms driving a CD5. RSX guys first car was a 96 LX automatic so those cars have a special place in my heart. I still like my teggys though.

Oh yea only thing that blows is pressed on wheel bearings with the rotor, they arent floating rotors, soo majority of their brakes pulsate from warped rotors

VIP
Saturday we pick out the H23a.. importer in Orlando has 2 of them so I'm gonna look them both over and pick the better of the two. Unless they're both garbage. The website has a super clean one listed though so hopefully thats one of the two.
You must log in or register to reply here.