VIP
I was driving to the VW dealership to get some warranty work done... cooling fan and immobilizer codes were found in the history while getting my 80k service done this past Saturday. I was less than 50 yards from the dealership, stopped in the left lane waiting for someone to turn, two cars ahead of me. Then a 17 year old girl hits the back of my car! She said she "looked down for just a second". I thought she was texting or something but she didn't have a phone on her; I had to let her borrow mine to call her parents and her insurance company.

I managed to just barely not hit the car in front of me, full ABS. I've never been in an accident before so I have no idea how fast she was going, it couldn't have been crazy but it was at least 10-20ish. Alot more force than those 5mph crash simulator cart things the police bring to schools.

I think she was braking, her nose went underneath me so the damage doesn't seem to be too bad right now. The rear bumper's shot and I have a bit of a dent in the spare tire well that has me concerned.

Her car on the other hand is probably totaled. It was an old 2000 Mercury Sable... Front end is shot, her passenger airbag deployed while her driver's side did not (she was driving alone), airbag shattered her windshield, and she was leaking oil pretty bad.

She has full insurance with Allstate so I don't think I'll have any trouble there (the cop even said so).

It was my first accident so I was kinda in shock at first... Like an idiot I put the claim in through my own insurance, but she talked with them as well and gave them her info, my insurance (AAA) will be contacting hers. I think I'll have to pay my deductible ($500) and as soon as her insurance claims liability I'll get refunded. Anyone with experience on that?

The Jetta held up well, and all being said I guess it could have been worse for me. 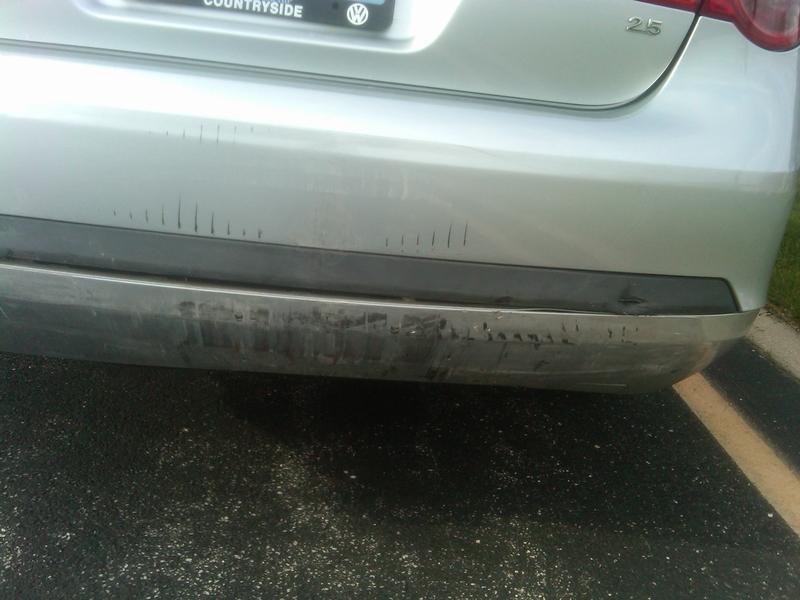 CivEX_00 said:
do you have any buddies that do body work?

If so go get a good estimate and have your buddies or
relative fix it for you and pocket the extra $$$$
Click to expand...

Hadn't thought of that yet, my cousin's husband has a shop...


CivEX_00 said:
Also idk about you state but i just let my insurance know and they told me to keep them updated and
i waited for the othe persons insurance to go through
and i never had to pay my deductable.
Click to expand...

You probably didn't open a claim like I did though, because that would just be dumb...

I called my insurance even before I called the cops. She should have called her insurance (I think?). As soon as I hung up my brain kicked back in and I started kicking myself.
Last edited: Apr 11, 2012

VIP
i was t-boned by a chick in an s10 several years back.. she had Allstate.. i contacted my insurance and they told me to contact hers.. i got a estimate from a body shop (most expensive in town BTW) and took the quote to allstate.. they examined my car and cut me a check a couple days later..

VIP
every auto accident is worth a couple grand, get a lawyer...it will cost the insurance company more money to try a case then to pay a settlement outside court...they would probably just offer your attny 2-5k just to get rid of you....get some treatment first

but in all seriousness, watch your self
as someone that went through a rear end collision, you want to makes sure you wont have any injuries pop up down the line
I still have a vertebrate at the base of my neck between my shoulders that is tender to the touch from an accident 10 years ago

VIP
Pictures of her car? Was she cute at least? See this is why the driving age limit should be raised to 18. She's not even technically responsible, her parents are.

but in all seriousness, watch your self
as someone that went through a rear end collision, you want to makes sure you wont have any injuries pop up down the line
I still have a vertebrate at the base of my neck between my shoulders that is tender to the touch from an accident 10 years ago
Click to expand...

Yep everyone's been telling me that. I even took the day off of work to see how I am today. It's only been about 18 hours but I think I'm ok so far... I'm paying attention though. 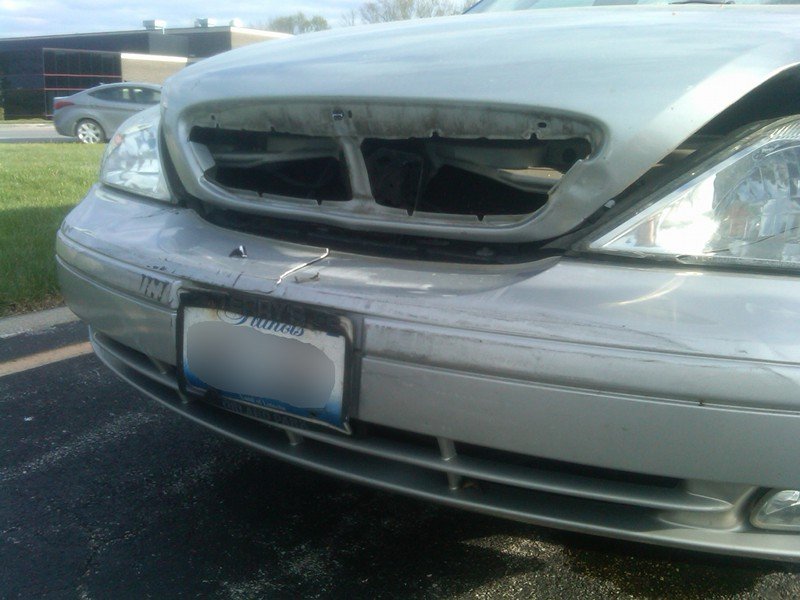 Passenger airbag went off and shattered the windshield, driver's airbag did not go off. Even the cop said that was weird: 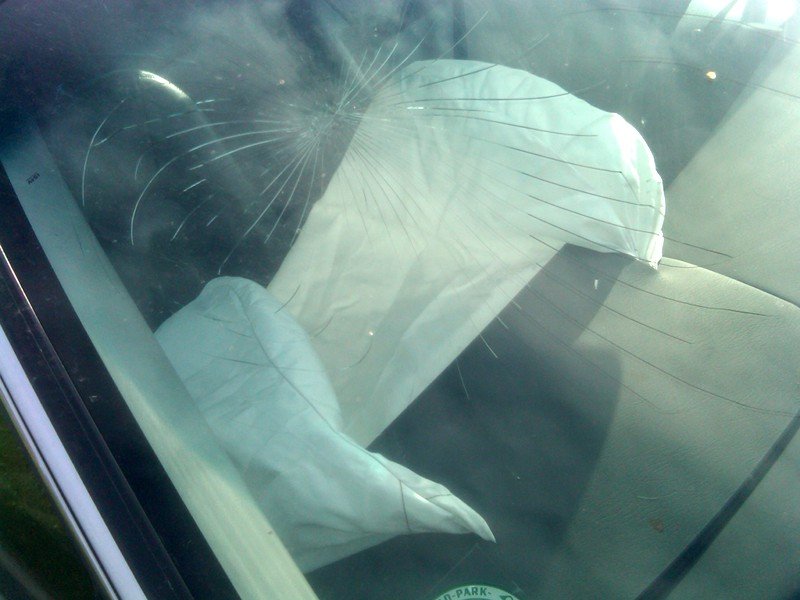 After some thought, she wasn't leaking oil... it had to be power steering fluid. I took a look at some of it, it wasn't dark or hot enough to be oil: 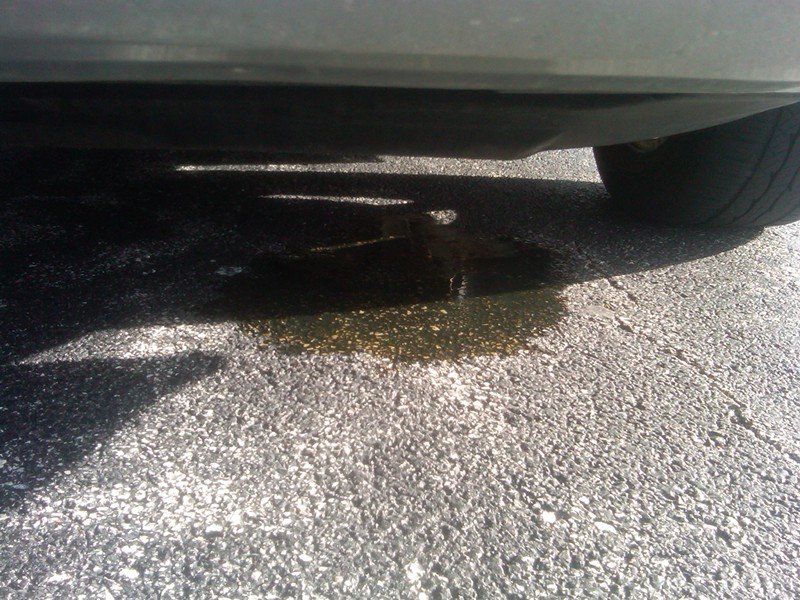 With the age of her car I bet it's still a total, though. The Jetta's racked up it's first kill!

VIP
Actually to me, the fluid looks like radiator fluid. In the first picture it seems to have some green color to it too.

Hope this accident doesn't have any lasting health wise repercussions for you.

|Chaz| said:
Actually to me, the fluid looks like radiator fluid. In the first picture it seems to have some green color to it too.

Hope this accident doesn't have any lasting health wise repercussions for you.
Click to expand...

Was still in shock so I went into car diagnosis mode. I popped the hood and everything. Went under and touched a bit of it on the scene... It was golden and oily so at the time in my shock I said oil. Dirty power steering fluid is my guess though.

VIP
Haha, you had her pop her hood?

Staff member
Admin
VIP
you shouldn't have to pay a dime, so long as she was ticketed/deemed at fault by the cop.

.. only time you have to pay the deductible is when you're going through your insurance

VIP
watch you insurance rates
they might try and increase your premiums even though you were not at fault.

.. only time you have to pay the deductible is when you're going through your insurance
Click to expand...

That seems to be the process I've inadvertently set in motion... I'm thinking I'll just call Allstate and do the same thing I've been doing with AAA and see what happens.

reckedracing said:
i would not file 2 claims
i think you will be fine, by going through your insurance company it generally means they have to pay for the repairs, as in the other party had no insurance, etc
if another INS company is picking up the tab your deductible should not apply, even if you informed your insurance company about it.
Click to expand...

Hmm, maybe AAA is being crappy about it then... They're saying I'd be on the hook for the deductible until Allstate paid them, then they'd refund me. Seems to be a raw deal though.

VIP
shouldnt have even called them.. call Allstate and give them her policy number and let them know you're the guy she hit.. ask them whats going on, they'll instruct you of what to do since she is at fault.. your insurance should have nothing to do w/ it.. did you make the claim on yours or something like she had no insurance?