Get ready to be pissed.

imagine if this was your state....

Are you kidding me. Talk about infringement of privacy. Installing a gps in your carâ€¦.

Are because they would lose tax money from gas taxes because of fuel efficient cars. Talk about screwing the consumer.


PORTLAND, Ore. â€“ Oregon is among a growing number of states exploring ways to tax drivers based on the number of miles they drive instead of how much gas they use, even going so far as to install GPS monitoring devices in 300 vehicles. The idea first emerged nearly 10 years ago as Oregon lawmakers worried that fuel-efficient cars such as gas-electric hybrids could pose a threat to road upkeep, which is paid for largely with gasoline taxes.

"I'm glad we're taking a look at it before the potholes get so big that we can't even get out of them," said Leroy Younglove, a Portland driver who participated in a recent pilot program.

The proposal is not without critics, including drivers who are concerned about privacy and others who fear the tax could eliminate the financial incentive for buying efficient vehicles.

But Oregon is ahead of the nation in exploring the concept, even though it will probably be years before any mileage tax is adopted.

Congress is talking about it, too. A congressional commission has envisioned a system similar to the prototype Oregon tested in 2006-2007.

But over the long term, commission members say, the nation should consider taxing mileage rather than gasoline as drivers use more fuel-efficient and electric vehicles.
As cars burn less fuel, "the gas tax isn't going to fill the bill," said Rep. Peter DeFazio of Oregon, a member of the House Transportation and Infrastructure Committee.

The next Congress "could begin to set the stage, perhaps looking at some much more robust pilot programs, to begin the research, to work with manufacturers."
Gov. Ted Kulongoski has included development money for the tax in his budget proposal, and interest is growing in a number of other states.

Governors in Idaho and Rhode Island have considered systems that would require drivers to report their mileage when they register vehicles.

In North Carolina last month, a panel suggested charging motorists a quarter-cent for every mile as a substitute for the gas tax.

"There is kind of a coalition that's naturally forming around this," he said.
Also fueling the search for alternatives is the political difficulty of raising gasoline taxes.

The federal gas tax has not been raised since 1993, and nearly two dozen states have not changed their taxes since 1997, according to the American Road & Transportation Builders Association.

In Oregon's pilot program, officials equipped 300 vehicles with GPS transponders that worked wirelessly with service station pumps, allowing drivers to pay their mileage tax just as they do their gas tax.

Whitty said the test, which involved two gas stations in the Portland area, proved the idea could work.

Though the GPS devices did not track the cars' locations in great detail, they could determine when a driver had left certain zones, such as the state of Oregon. They also kept track of the time the driving was done, so a premium could be charged for rush-hour mileage.

The proposal envisions a gradual change, with manufacturers installing the technology in new vehicles because retrofitting old cars would be too expensive. Owners of older vehicles would continue to pay gasoline taxes.

The difference in tax based on mileage or on gasoline would be small â€” "pennies per transaction at the pump," Whitty said.

But the mileage tax still faces several major obstacles.
For one, Oregon accounts for only a small part of auto sales, so the state can't go it alone. A multistate or national system would be needed.

Another concern is that such devices could threaten privacy. Whitty said he and his task force have assured people that the program does not track detailed movement and that driving history is not stored and cannot be accessed by law enforcement agencies.

"I think most people will come to realize there is really no tracking issue and will continue to buy new cars," Whitty said, noting that many cell phones now come equipped with GPS, which has not deterred customers.

Others are worried that a mileage tax would undermine years of incentives to switch toward more fuel-efficient vehicles.

"It doesn't seem fair," said Paul Niedergang of Portland, that a hybrid would be taxed as much as his Dodge pickup. "I just think the gas tax needs to be updated."
Lynda Williams, also of Portland, was not immediately sold on the idea but said it was worth consideration. "We all have to be open-minded," she said. "Our current system just isn't working."

VIP
This is Silverchild's state. Waiting for response.

Moderator
VIP
Once they do that they will start mailing you speeding tickets every time the gps shows you doing so.

Rip out gps and just use maps

OGMatt said:
Rip out gps and just use maps
Click to expand...

First off the GPS main goal is NOT to be used as a map system, it is not to tell the user where you're going, but rather the people up stairs where you have been.

Try removing it... if the law says it has to be there, guessing there would be a check up every year (paid for by the driver) to make sure everything is in working order and that you didn't just remove it and say you never drive the car.

I don't get why they need to look so deep into it. stop taxing gas and tax the miles, I have ZERO problem with that. Do they really need GPS to do so?

How about this, most states have either a yearly or every other year, inspection, or smog test. Everytime you get that done, or everytime the car is sold, check the friggin mileage, I understand that they want to tax you so you pay every month or week or day depending on how its setup. When you first get the car, you fill out a form with how many miles you figure you use, you pay a monthly bill based on that mileage figure, if you're under, you get a return at the end of the year come tax time, if you're over you pay out at the end of the year.

Does this really need to be that hard to do?

Um lets see, I'd attach the GPS to a car I dont drive, maybe like the beater truck around the yard lmao... mite go 4 miles a day top speed 10 mph

They already make a lot of money here from the highway tax; what the hell are they doing with it? So far they've repaved a couple of roads that had zero issues. Where they needed to widen highways, they instead spent it on a repaving job that had to be redone again. Instead of dumping money into projects, they need to figure out why the projects cost so much.

I'm for toll booths, etc. Taxing people based on miles is just a "cheap" way of making money off the people. Next thing you know you'll get taxed for riding your bike.

Also, our transit systems suck ass. That's why no one use it. Invest in something better, more people will use it and you could also make more money off of that.
Last edited: Jan 2, 2009

i will be standing on the idaho/oregon border laughing.

Rest In Peace
Interesting List of Taxes that exist today 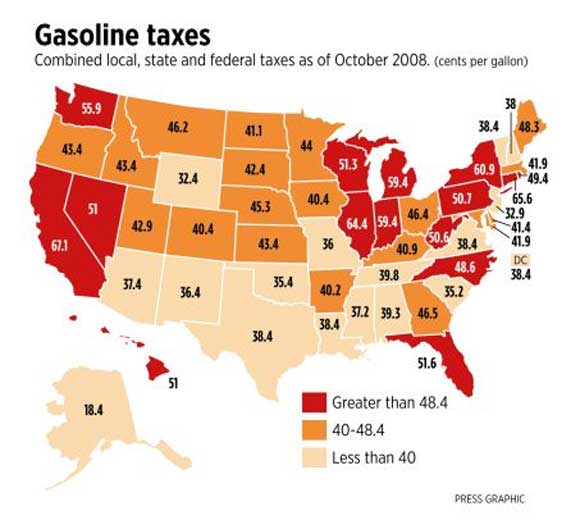 jeffie7 said:
I don't get why they need to look so deep into it. stop taxing gas and tax the miles, I have ZERO problem with that. Do they really need GPS to do so?

Does this really need to be that hard to do?
Click to expand...

In other countries, let me speak from experience here, this is done, jsut not with GPS. In Germany every time you have to pass the TÃœV, they look at the odometer. You pay tax based on that. It's not per-km, but it's a tiered system, much like income taxes-- drive more, pay more. That's pretty simple, why can't we do it here?

Fuck yeah. Gimme that GPS. For people like me who drove 50 miles each way JUST TO WORK, this would be a godsend. I'll fucking pay half a cent a mile even, willingly. I have no problem paying for roads, and yes, I drive on roads more than most people, so I should have to pay more.

i'm fine with paying for decent roads. but there needs to be some goddamn accountability to the public about where and how that money is spent. it's the mandatory GPS thing that got me ranting earlier. no fucking way man. 100 miles a day on the most cold-weather heaved, potholed roads in the midwest, bet your goddamn ass i wish the current gas taxes were going somewhere we all actually drive, instead of paving some deer path in the bwca.

sorry i started the rant again. how fucking hard is it to keep decent roads. half of this country is like driving across africa.
Last edited: Jan 2, 2009

"Not one of these taxes existed 100 years ago and our nation was the most prosperous in the world, had absolutely no national debt, had the largest middle class in the world and only one parent had to work to support the family."
Click to expand...

100 years ago, things were very different. If you didn't have any skills and couldn't get a job, that was no reason to get paid for free. naming just 1 of the hundreds of many things we didn't do back then.

What scares me is we're in this big mess because of giving money away, to our own people, to cities that have been hit by storms, to other countries and so on. Now that clearly the path we've taken hasn't worked, we have a new guy in office for CHANGE, half the people don't give a damn what he does, as long as he does CHANGE!!!!! so now, we're going to give alway that much more magic money!

There's so many easy ways to tax people for driving, using a GPS is just a straight up bad idea.

Rest In Peace
Zeitgeist - The Movie


just wait til we all get chips implanted...

dacheat said:
i'm fine with paying for decent roads. but there needs to be some goddamn accountability to the public about where and how that money is spent.
Click to expand...

If people knew where half the money of this country was spent, they'd be pissed.

its better you don't know.

This is more aimed at high MPG cars/hybrids.

Germany actually takes care of their roads with those taxes. What do we have to show? Oh yea, fly our goverment officials so they can take an aerial look at our highways on their way to Germany to visit the Autobahn using "highway tax" money since the autobahn is considered a highway.

Rest In Peace
we're going to get a change alright....wait for Amero....

YouTube - BAILOUT CRASH AMERO ENSLAVEMENT MARTIAL LAW CONSPIRACY OF US
You must log in or register to reply here.

Govt plan to tax drivers by the mile
2

Cars to have Manditory "Black Boxes"
2

MA Politicians Are On Drugs...

FAA under pressure to allow Drones in US Skies