How to Convert DPFI TO MPFI: A Wiring Guide​ *I advise you to put the connectors near the firewall for the new wires you run for future engine removal. This is not a must, but may be helpful*
* To avoid headaches, be sure to leave yourself enough wire slack for both routing and soldering*

Injector sequence:
Looking from the front of the car,
Distributor #4 #3 #2 #1 TIMING BELT

Now you need to cut off the old square DPFI dizzy plug from your engine harness and solder on the round MPFI one. Just match colors from the engine harness to the plug. Yes there are 2 white wires, one is bigger than the other, just match them up.

Now you are looking at the plug and wondering why there are 2 left over wires. The wires you ran into the engine bay from Cl and C2 just so happen to be the same colors, if you used factory colors. If not, the blue/green wire on the plug goes the the wire you ran from C1 and the blue/yellow one goes to the wire from C2.

Based on the year of your car you will have 2 or 3 leftover plugs, just let them hang there or cut them off and tape up the ends.

I highly recommend that you SOLDER ALL CONNECTIONS and use headshrink and electrical tape. How you route your new wiring is up to you, but if you left the ample wire when running new wires you should have no problem making it look stock.

I tried to write this as simple as possible. Many people like to use existing wiring but, in my eyes it adds confusion.
Last edited by a moderator: Mar 4, 2021
Click to expand...
R
Written by

Before I did my conversion, I had a real hard time looking online for the right way to do the conversion including what parts I need and what steps. It was pretty much pointless to keep looking online. A friend of mine sent me to a link and im going to share it with everyone cuz I know it was a bitch looking for help. This is for the people who where in my shoes before the conversion (STUCK) so here you go. Hope it helps.

Parts could cost anywhere between $230-$405 depending on what kinds of deals you can find and where you get them from, it may also be cheaper if you buy everything from one person all at once

It is much easier to use your existing DPFI harness and just add the extra 4 wires that will be needed. The Si harness will be much harder to use.

There are two major wiring changes that you'll have to do going from a DPFI system to an MPFI and a couple other minor things that need to be done too. The first one is the crank angle sensor wiring which is the easy part. The second one is the fuel injector wiring which is slightly more complicated. Also, you'll have to switch the two wires on the TPS because the TPS on the new intake works in the opposite direction. If you dont switch them, the ECU will think that the engine is at Wide open throttle when its actually at idle. I highly recommend soldering and heat shrinking any electrical connections you will be making because it is very possible for connectors to come loose from all the vibration and solder will hold up better in the long run. Also, the TPS and EACV plugs are too short and they'll have to be extended. You're also going to have to switch the manifold support bracket, since the bolt pattern from the support to manifold is different from DX to SI, although they still bolt up on the block the same.

TO HOOK UP THE MULTI-POINT CRANK ANGLE SENSOR:
- First, you'll have to go to the passengers foot well to where the ecu is located.
- Pin B10 and B12 should both be empty.
- You'll have to cut and move the wire that goes to pin C1(orange) over to pin B10, and move the wire from pin C2(white) over to pin B12. Don't get these two mixed up or else the ignition timing will be severely retarded. Leave enough wire at the ECU side of pin C1 and C2 for next step.
- Now run wires from pins C1 and C2 into the engine compartment and label them.
- There will be a connector on the new Si distributor with two unused pins. One of the wires will be blue/green stripe, and the other will be blue/yellow stripe.
- The wire that is blue/green stripe will go to the wire from pin C1 on the ECU and the other wire that is blue/yellow stripe will go to the wire from pin C2.

SWITCHING THE WIRES AT THE TPS:
This pretty much explains itself, just switch the two outside wires(green/white and yellow/white) around at the TPS and then you're done this step. I used the TPS connector off the Si harness, just so that I could just match up all the wires, since the wires are already reversed on it.

INJECTOR WIRING
(In the car):
First of all, while you're still in the passengers footwell, cut wires A3(yellow) and A7(red), although leave some wire on the ECU side for later use. Now run wires from pins A3 and A7 into the engine compartment and label them. 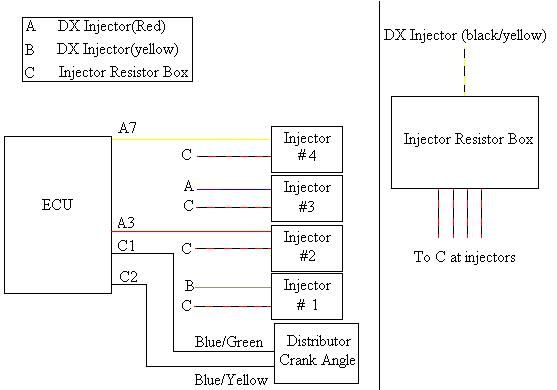 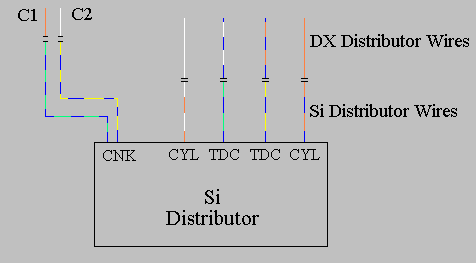 You should have three extra plugs left over after you are done the swap. two of them are the old DPFI injector plugs, and the other one is for the tandem valve for the DPFI system, which you do not use on the MPFI system, you can either just cut it off, or tuck it away somewhere. 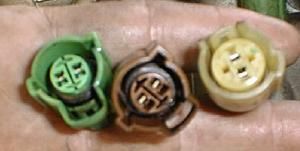 OBD1 ECU PINOUT
The # go up and down from left to right.(see)

Another thing make sure you have extra pin inputs since you will cutting the wire and not taking the complete wire out of its socket.