Now This Is Great Pic Of Day... 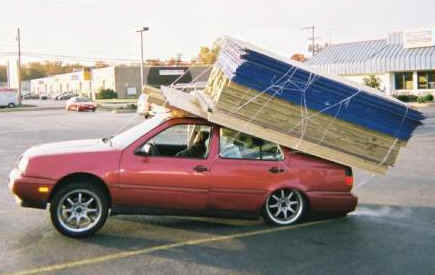 This picture is real (not doctored in any way) and was taken by a transportation supervisor for a company that delivers building materials for 84 Lumber. When he saw it in the parking lot of an IHOP, he rushed out and bought a camera just to take this picture.

The car is still running, as can be seen by the exhaust. A woman is either asleep or passed out in the front passenger seat. The male driver was jogging up and down Rt. 925 in the background.

Witnesses said their physical state was other than normal. The driver finally returned, and was found by police crouched behind the rear of the car, attempting back to cut the twine around the load! Luckily, the police stopped him before he succeeded and the whole load landed on top of him. Police had the load removed.

The materials were loaded at Home Depot, whose store manager made the customers sign a waiver. While you can imagine the weight of the plywood and 2x4s, whatâ€™s not readily apparent is in the back seat: ten 80-pound bags of concrete! Police estimated the entire load weighed at least 3000 pounds.

Both back tires exploded, the wheels bent, and the back shocks were driven up through the floorboard. The car, with Florida license plates, was headed for Annapolis, where the couple presumably planned to build a new house in which to smoke their crack.
T

someone let me know if my bubb rubb pics are getting old......

re: original post...if its not photoshopped, howcome...

1. the front wheel is not round?
2. the back tire looks like a 20 series, and the front looks like a 70 series? (if the rear tires exploded, where is the debris?)
3. the rear window isnt broken?
4. the lumber hasnt fallen to the ground?
D

i swear i laugh out loud whenever i see that fuckers face.... lol
S

This picture is seriously at least 3-4 years old.

Hello and welcome to '98

VIP
the roof would also be crushed with all that weight on it.

VIP
no its real I remember hearing about it a few years ago in the news it happened in maryland! as Im typing this Im talking to my friend on my celly and he also remembers it I sent him the link and hes like yeah I remember that

it does how ever look photo shoped but its not

true, this pic is old though.
P

your buddy is bullshitting you.
that was from clubSi photoshoppper forum Circa 1998.
T

1) reflection in passenger window..... doesnt reflect the wood on top.
2) back left wheel...WAY too small. perspective OFF like crazy.
3) angle at which car is at does NOT match up with ground. take a close look, youll see what i mean.

and the final clue which led me to believe this pic is a fake?

You Know You're A Road Racer When...