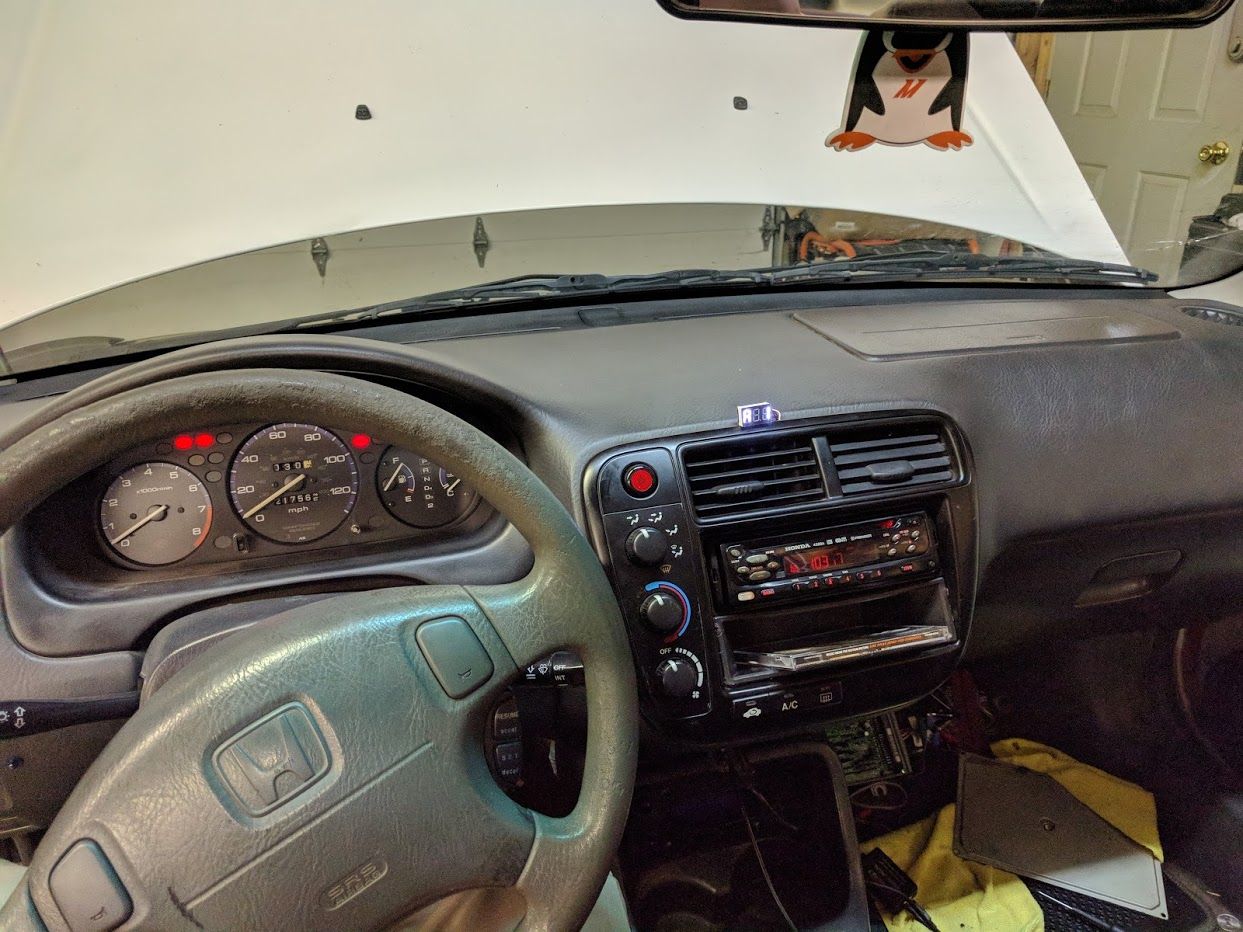 The lower pocket doesn't fit. I need to get that figured out, because it's super useful.

VIP
Good news! The head gasket passed a leakdown test, and compression is still where it was pre-turbo.

The exhaust manifold gasket, however, was totally destroyed. 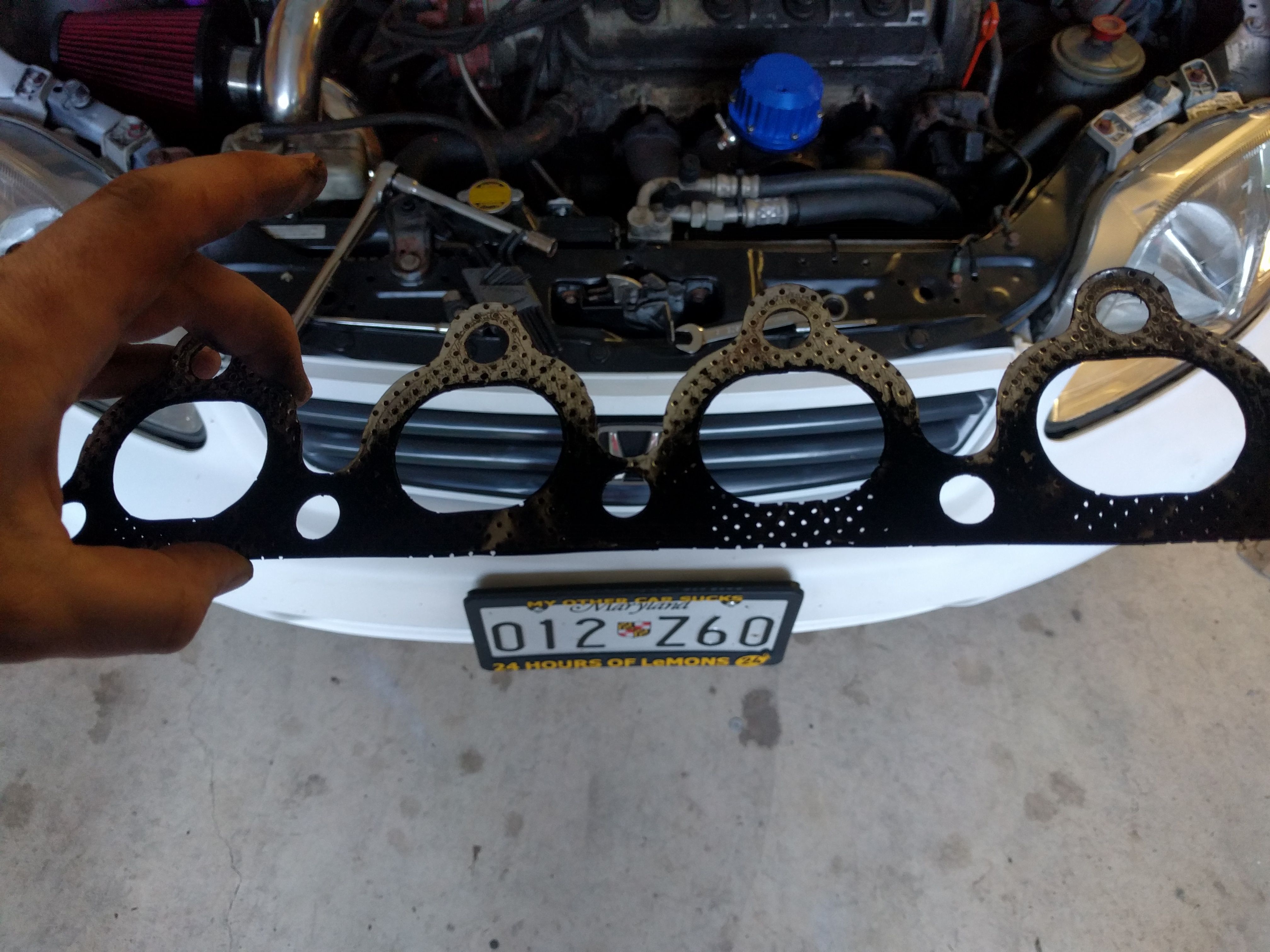 So, yeah, apparently I should have tightened those nuts a bit more often. 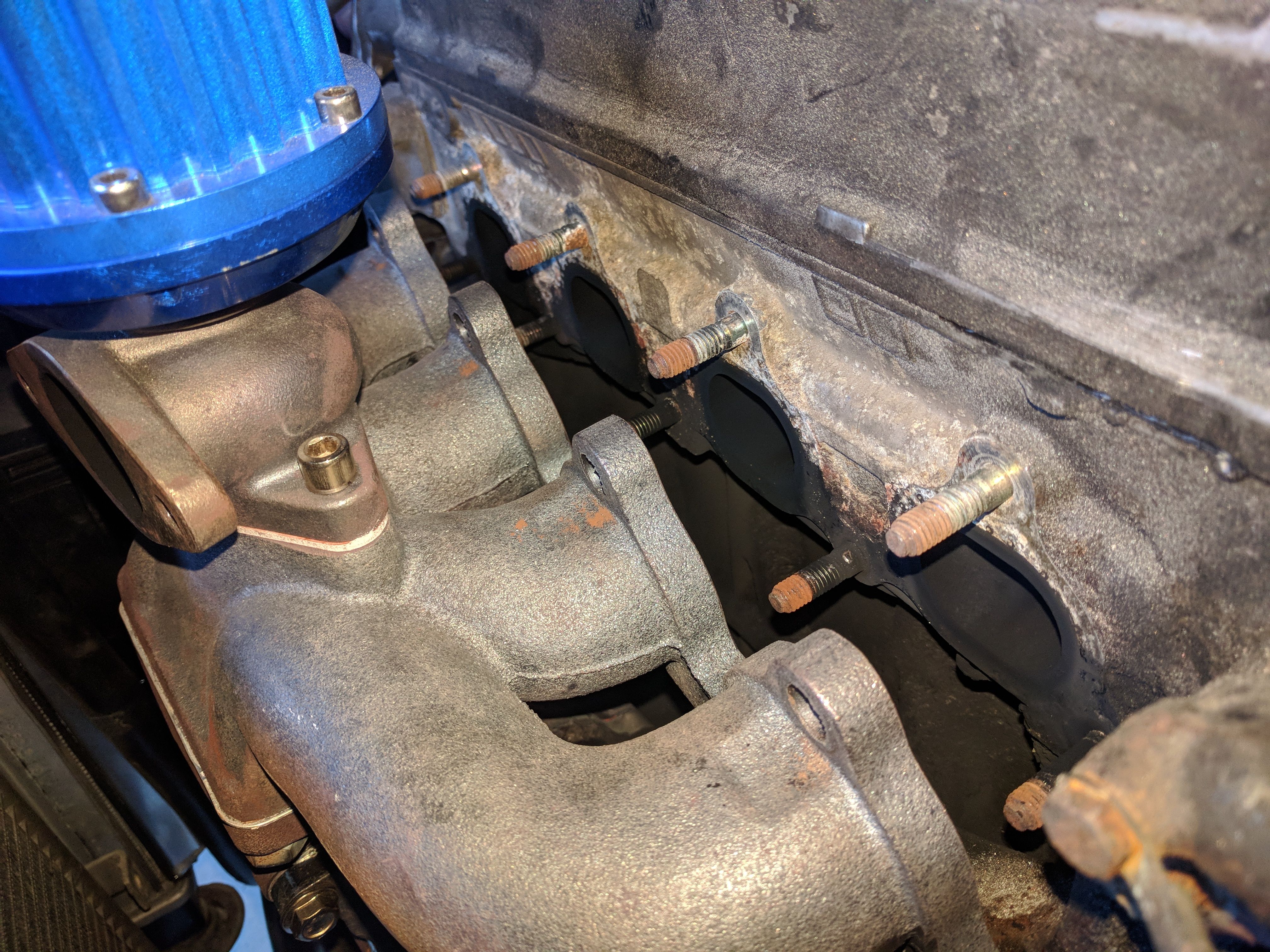 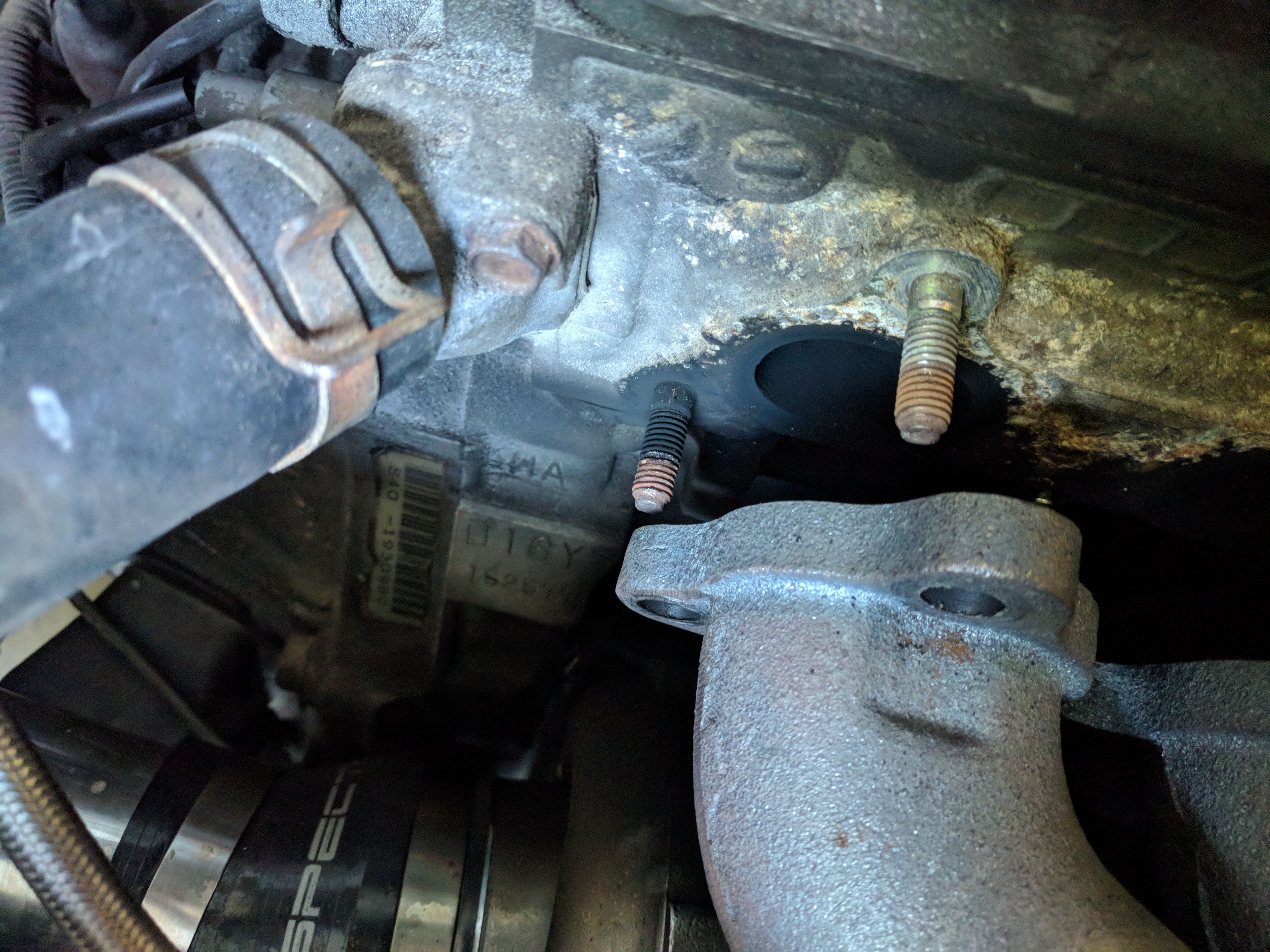 So, now I torqued everything as tight as a 4" long 1/4" drive ratchet would let me, on the OEM header gasket, and we'll see if it works... It doesn't really matter because I've gotta put ARP studs and a new head gasket in, so it just has to last a little bit.

This time I tightened from the inside to the outside, rechecking inside after every outside nut.

This leak explains why it felt like it kept getting slower every time I drove it.

Still trying to get a good solid tune, it's a lot harder than I remember, but maybe that's because I'm not using hondata...

VIP
Damn. I've been chasing this tune for weeks. Just realized that an OBD2 EVAP purge solenoid is inverted logic an obd1.

Moderator
VIP
Woo progress! That was a nasty exhaust leak you had going.

VIP
Why are you bubbling at idle if the HG is intact? That's curious.

Matts96HB said:
Woo progress! That was a nasty exhaust leak you had going.
Click to expand...

Yeah, it sounds like it might be back though... I think the header studs and/or nuts just aren't holding correctly. I drove it to work again today to shake it down, and it sounds like it's loosened up again too.


reckedracing said:
Why are you bubbling at idle if the HG is intact? That's curious.
Click to expand...

I'm gonna bleed the system, then see if it's still a bubbling issue. It could be an air pocket working its way out. Who knows.


So, I left the key on engine off while I was diagnosing the EVAP Canister Purge Solenoid the other day, and apparently you can't let a wbO2 sit like that for hours. So, I've gotta pull the LSU4.2 out, free-air calibrate it, and put it back in, hoping that's the issue. lol. The WB only reads "09.0" right now, except when it flashes "09.7" or "19.0" occasionally.

VIP
I calibrated the wbo2 sensor, now it actually reads again. I now have a really good idea of what needs to happen... I've gotta clean it frequently until I get the tune cleaned up. Crazy how that works... I was literally chasing my tail with the EVAP purge and carbon covered wbo2.

On the section of private road I have access to it ran a 15.2 and 14.7 second 1/4mi passes. I think it's got more if/when I get the AFRs cleaned up, and timing set when I finally get everything else fixed and get some Dyno time. 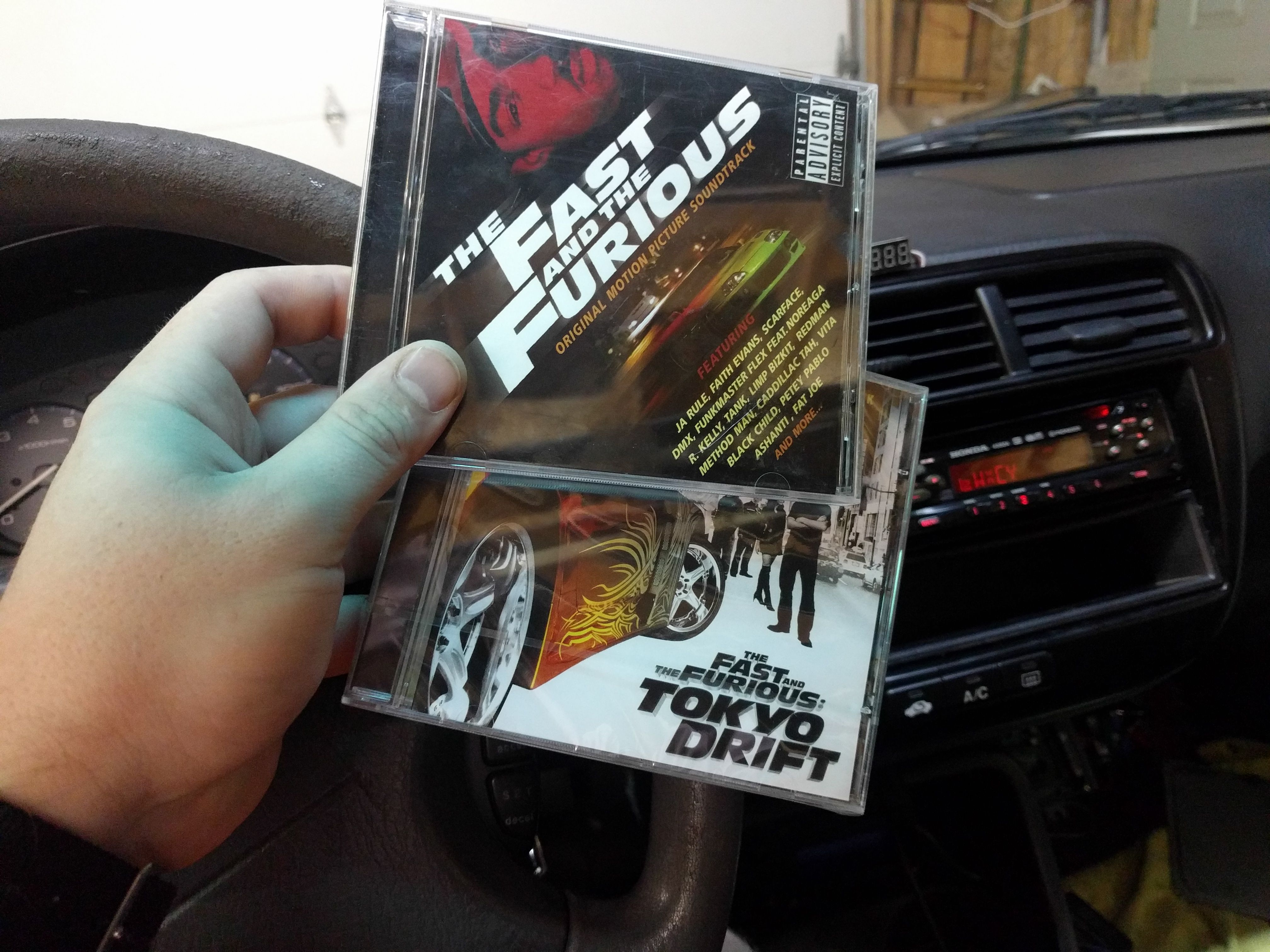 awptickes said:
Yeah, it sounds like it might be back though... I think the header studs and/or nuts just aren't holding correctly. I drove it to work again today to shake it down, and it sounds like it's loosened up again too.
Click to expand...

You might try replacing a couple of the studs with bolts. I had to do this out of necessity (ramhorn mani didn't have room for studs) but it helped alleviate the same problem on my Civic IIRC.

awptickes said:
I remembered why I leave the stock radio in cars now...
View attachment 27434
Click to expand...

Nice! I wouldn't twist the whole harness though- you might pick up interference in the speakers from having your power line wrapped in with the rest.

phunky.buddha said:
Nice! I wouldn't twist the whole harness though- you might pick up interference in the speakers from having your power line wrapped in with the rest.
Click to expand...

Yeah, I later decided against doing that too, so instead I depinned each of the speaker pairs and twisted each one independently, then leitz braided the ground, batt, key, and dimmer together. You know, because it'd bother me otherwise, lol...

I'm still working on getting a day/afternoon to drive around and tweak the tune... It doesn't help that BMTune datalogging is broken right now, so I'd have to use freelog and do the old school copy and paste with Excel to make it work, lol. But... That may be what it takes.

Having some issues with the Ostrich 1.0 and BMTune, so I'm trying to work it this way. Not having much luck. While the ROMulator works, it's not working in the software. 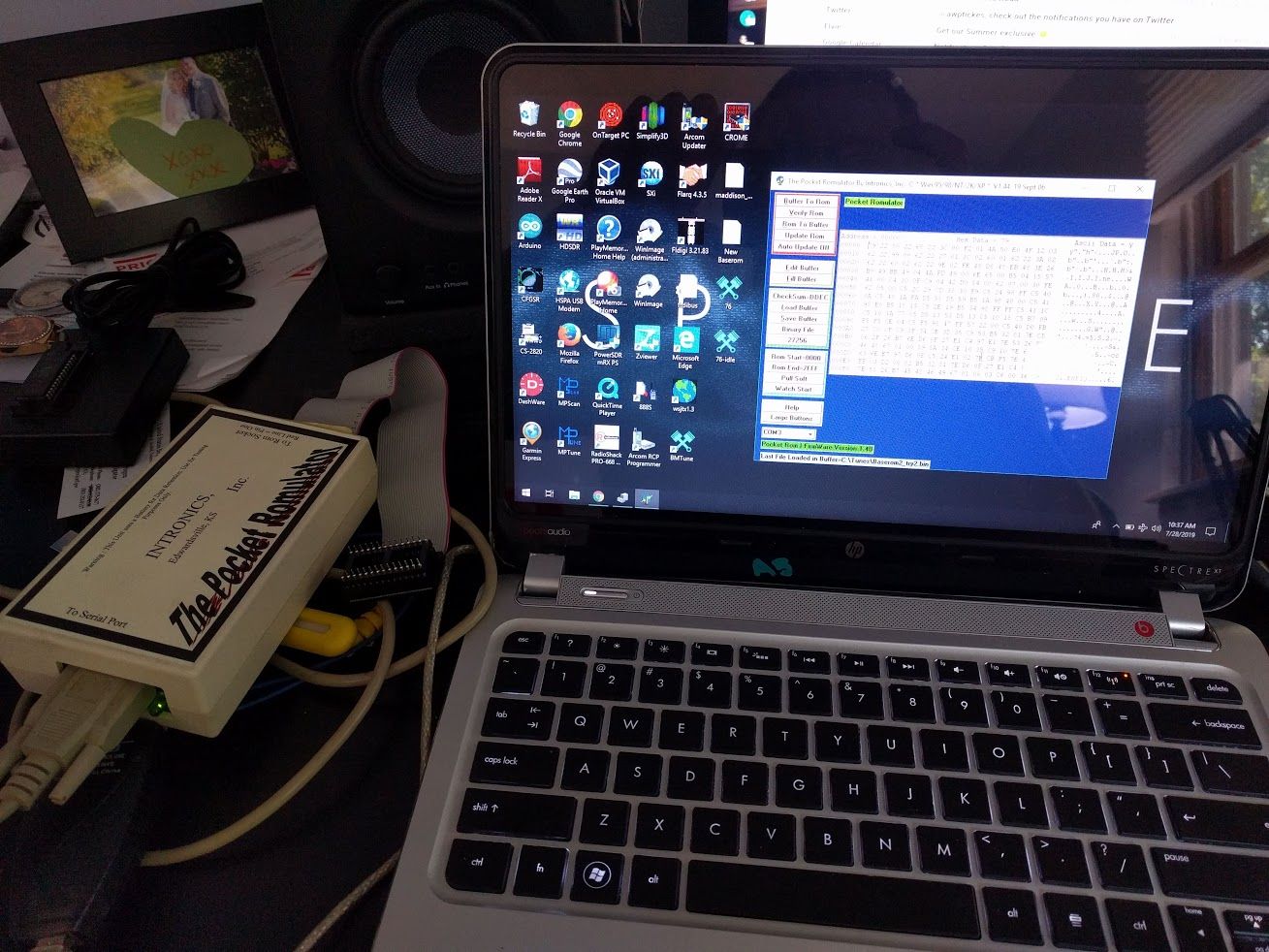 Ever feel like you're trying to make a time machine work?

VIP
I would have sold you mine for $1000. It is in way better shape than this

Haha. Do you deliver? Nah, I don't need another 20 year old civic with issues.


I've been having this issue where when the A/C is off, the car idles super lean. Like, 18:1 AFR lean. If I add some fuel to the low-load columns it doesn't run well with the A/C on.

So, here's the rub, If I turn the A/C on, it gets richer, but only for a bit, due to the combined EVAP logic of an OBD2 chassis running an OBD1 ECU. It runs out of fuel vapors to make it richer, lol. 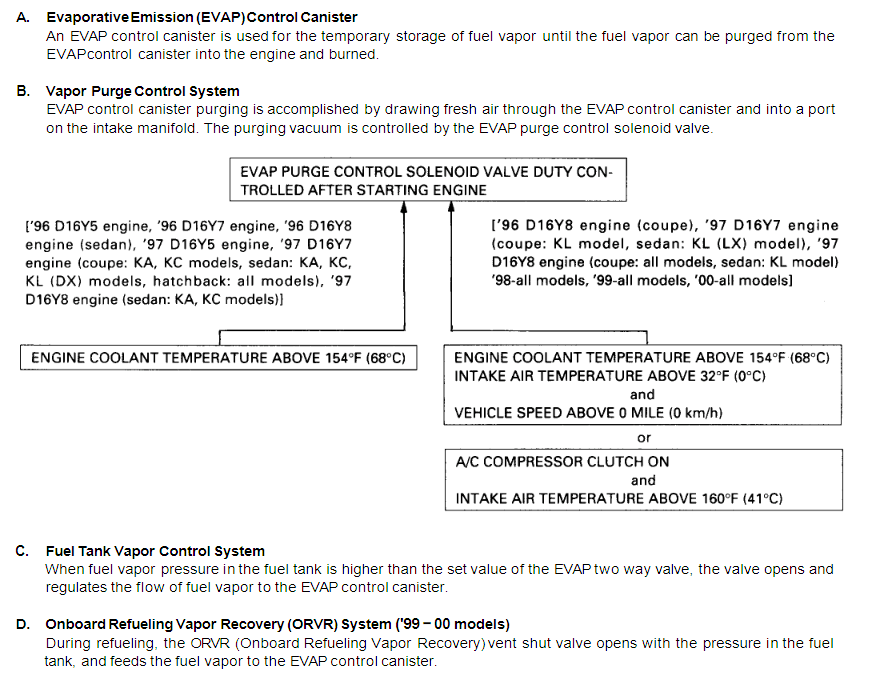 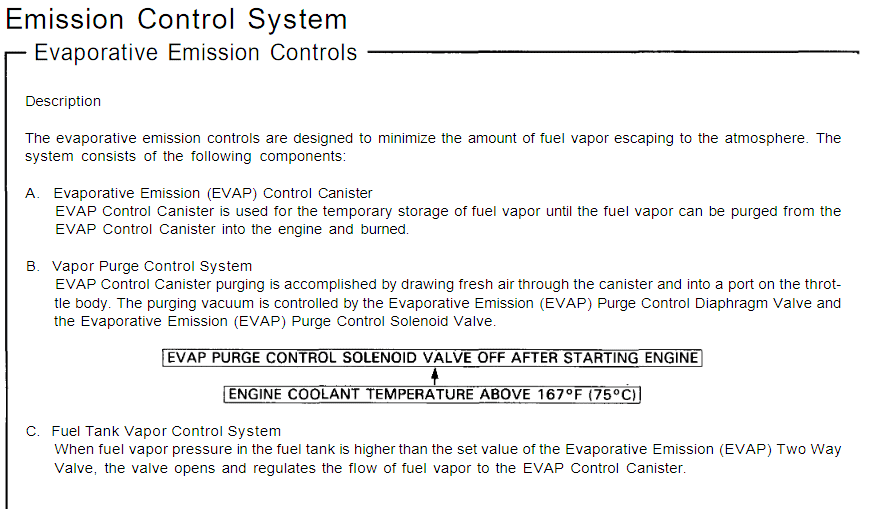 It seems like the ECU code from BMTune doesn't truly follow this logic, nor does crome. So, in order to recover the vapors into the engine, I've gotta figure something out.

On top of this, BMTune doesn't datalog anymore. The developer broke something with datalogging during an update sometime around the 15th of July, and I haven't been able to do much of anything with the tune since. I've been working with him, but last night he told me that he's not sure what's wrong with it. Cool, right?

I think I'm going back to Crome Gold in the meantime, just to get the fuel table worked out, then convert it back to BMTune.


A few weeks ago, I figured out why the throttle stuck closed: The throttle body was worn to the point where it was actually binding on closure due to the carbon scraping away at the Al bore over millions of actuations. So, I bought a 68mm eBay throttle body because it was cheaper than an OEM one, and even if I cleaned/repaired it, there's no telling what might actually be wrong with it. Last night, I got the 68mm throttle body on the car, but it's one of those OmniPower throttle bodies with the holes drilled so it "leaks" air past the throttle blade.

VIP
Got a new computer with a higher resolution screen, and a fresh install of Windows -- dedicated laptop for tuning instead of using the same one I use for everything that needs Windows. Now datalogging works great, and I'm going to start getting it all dialled in. Its finally running well enough to drive around without panic.

Timing needs a bit of work, heard some detonation on the street today. Gonna pull a bunch and get fuel right, then add it all back in. 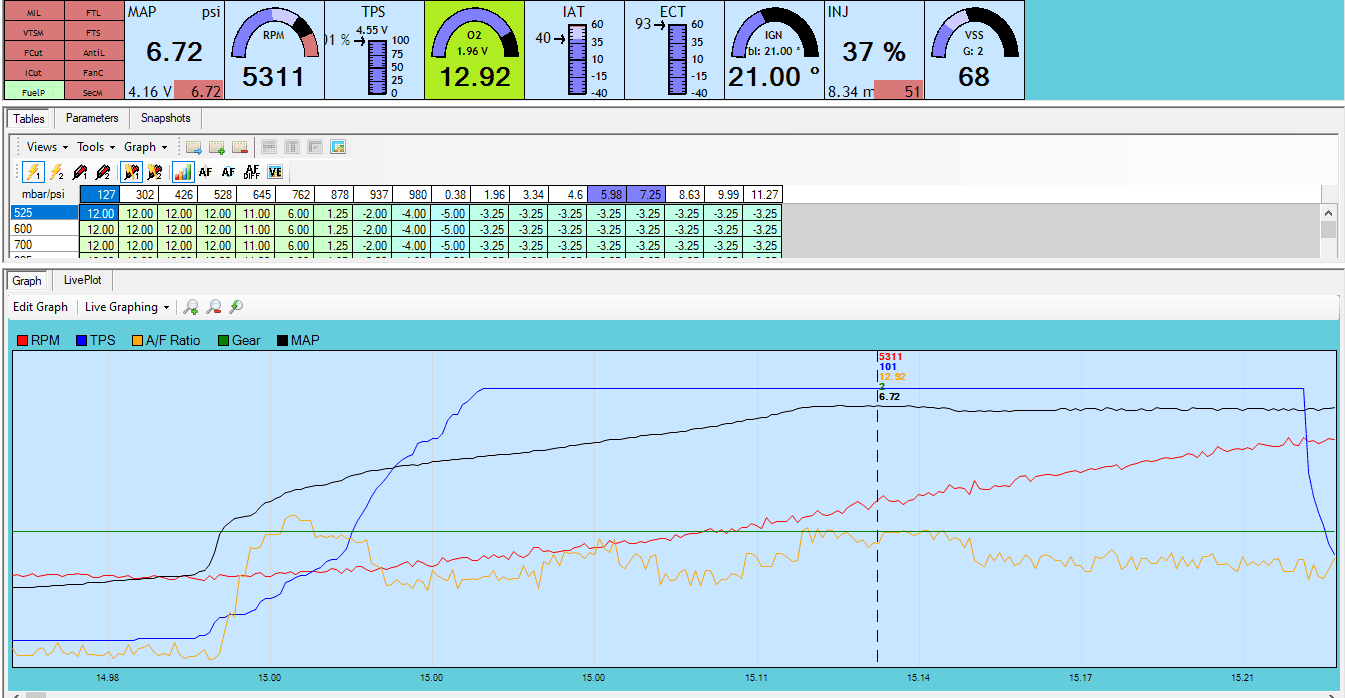 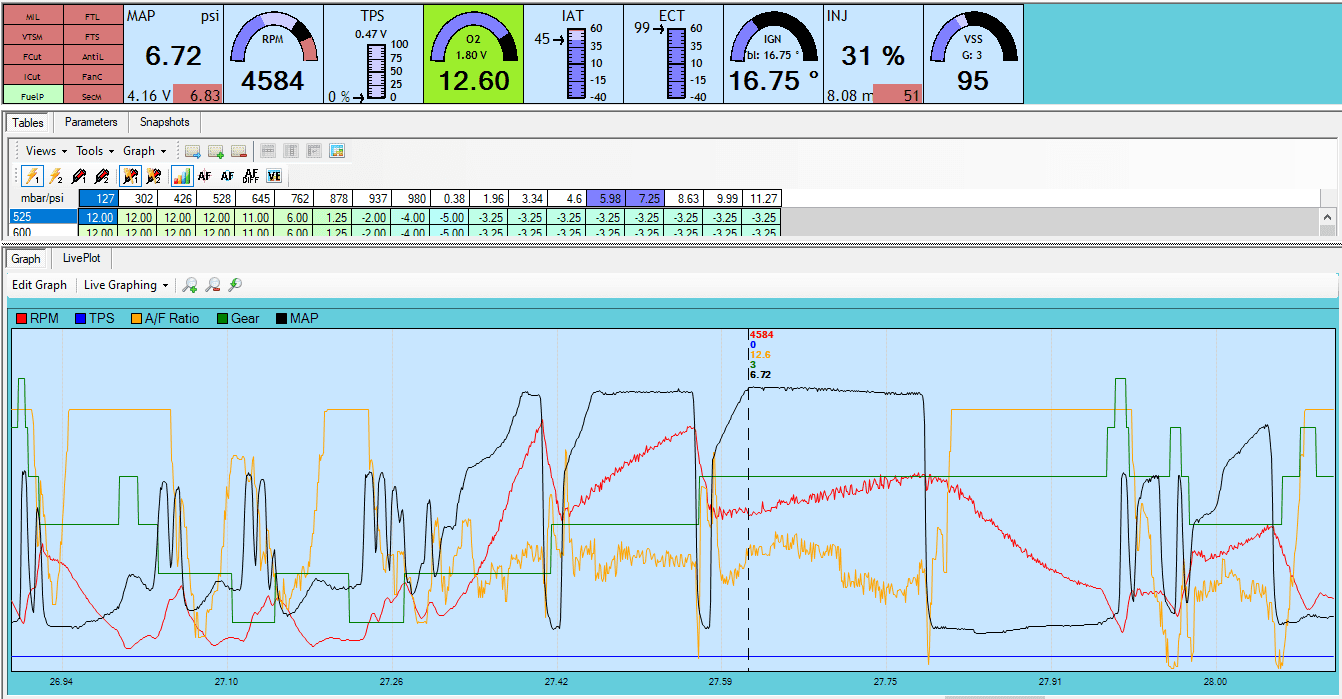 Good times. Now to get the fuel tables figured out and smoothed out.

I'm going to drain, fill, and bleed the coolant soon too, I think I'm fighting an air pocket, because it's not overheating anymore, or bubbling at idle, just forcing coolant into the reservoir when it gets hot.

I got some exhaust gaskets from Summit Racing, they're clearing out a bunch of Mr. Gasket stuff, so I'm going to fix the header leak once and for all, that ought to help with spool times and power too. Win/Win/Win, because it gets quieter too.

How bad of an idea is it to replace the head bolts with studs one by one without pulling the head? I'm lazy, and I'm probably going to have to replace the HG anyway, but if this buys me time, it's a win.

VIP
Heading over the bridge this morning, Maddison was running about 7.5 pounds of boost. Backing off the timing really made her slow out of boost, but I thought it was safe... Apparently not.

Looks like that was too much, now she needs a new d-series engine.

EDIT: Upon review of the datalogs, apparently I was rolling without a TPS sensor plugged in? It looks like it came unplugged on Saturday, and I didn't notice. I wonder if this had something to do with it.

VIP
She's back home, gonna pull her into the garage later tonight and start seeing what exactly happened. Gonna start by draining the oil, updates will happen really late tonight.

Here's a pic of her getting loaded up: 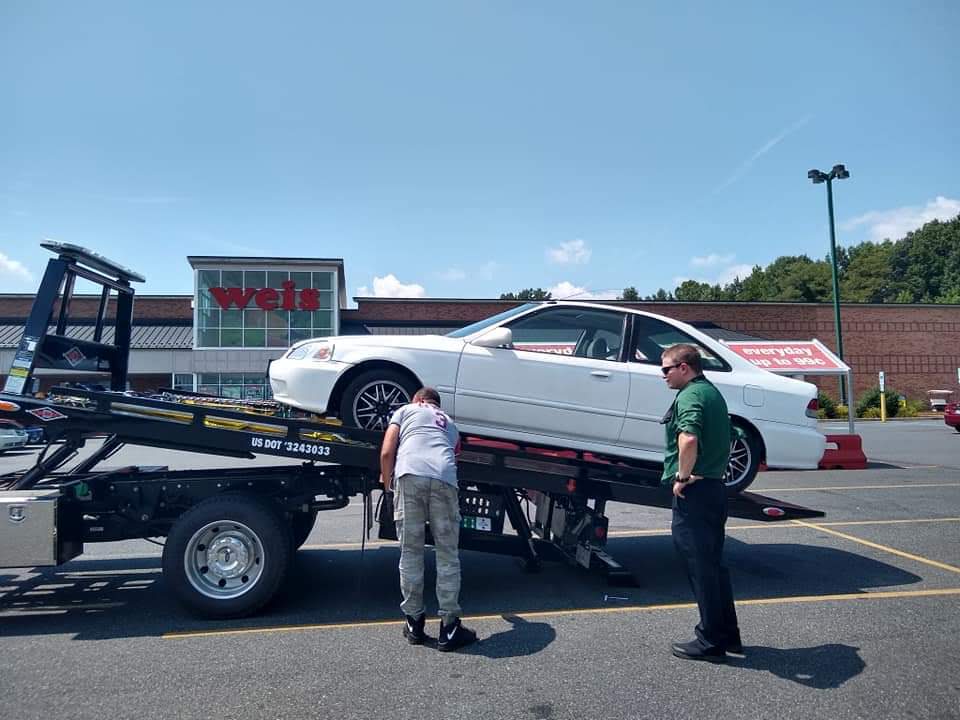 VIP
Post-mortem had to wait until today... So, results are in: 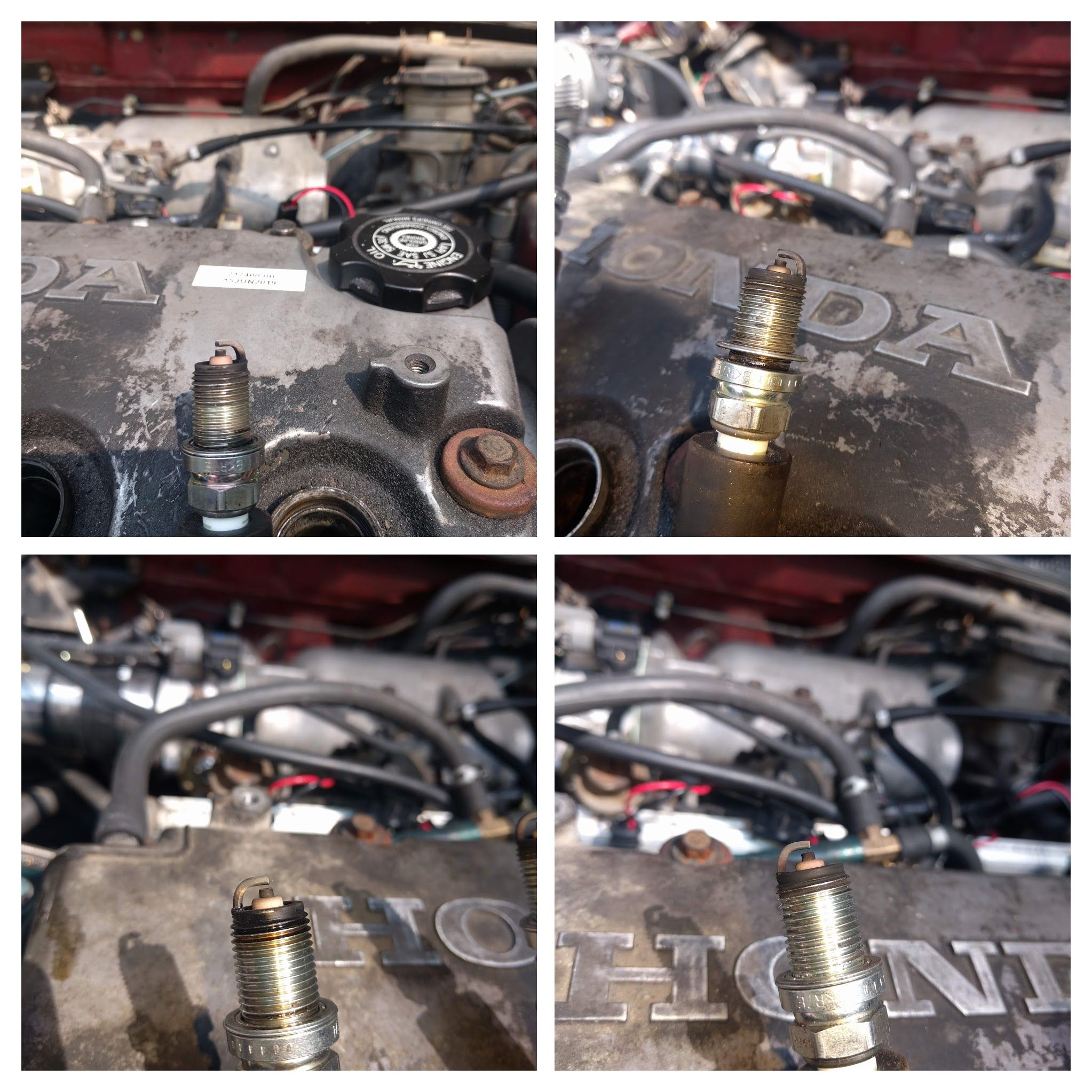