VIP
So I took the Integra money and part of last week's paycheck and turned it into a $1,200 1996 Prelude S. Not going full project mode, just going to fix and drive.

The good: Transmission is buttery, interior is mint. No cracks tears or otherwise anywhere. Everything is there. A/C and P/S work great. Underneath the car is very clean. Not a spot of rust anywhere, two small spots where oil has been. Car has spent it's entire life in the same family, has all the original papers. Clutch is healthy, motor revs out fine and drives very smooth.

The bad: 209,000 miles, body is pretty rough. Needs an axle. Owner was up-front about the axle, it drives fine I'm just babying it through turns.

Bought the car. Runs and drive really well but after about 30 minutes of driving it overheated. I drove it home, and it was sitting in the shop idling while I scanned it (only code was for a catalytic converter inefficiency) and it started to overheat. I turned off the motor, the gauge was at 3/4 temp. I left the key on so the fan would remain on, and it cooled down rather quickly. The liquid that came out appeared to be water, so i drained the system and refilled it with green antifreeze.

I drove it to the store, back, to a friends house, to the gas station, and then home for a total of probably 50 minutes on the road and as i pulled into my neighborhood it was starting to overheat so I got it in the driveway and again, coolant was slowly bubbling out from the overflow bottle and a smaller amount from the rad cap. It doesn't seem to have a leak and there's no smoke coming from the exhaust... if it drove fine for 30 or so minutes I think if the water pump was bad it would have overheated much faster. I'd certainly hope its not the headgasket but that seems like a possibility. I'll check coolant levels in the morning and see if the color seems off, but if it's drinking coolant I would expect white smoke from the exhaust.

If the overheating isn't a headgasket, I think I come out ahead. If it is, I can do all the work myself, provided the block or head isn't warped. At which point I'm only out parts and labor. For 1,200 it feels like a good purchase. Pictures to come 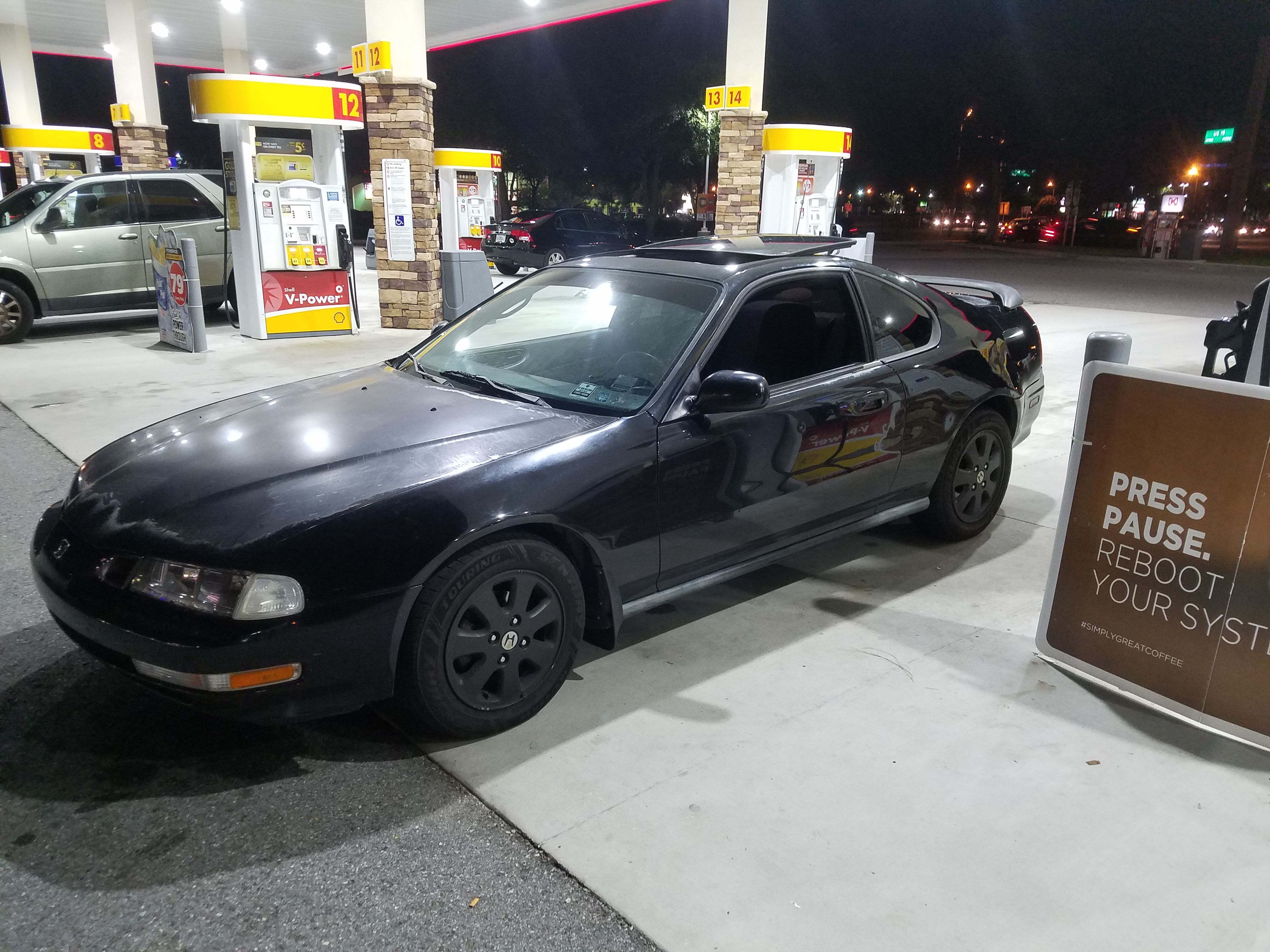 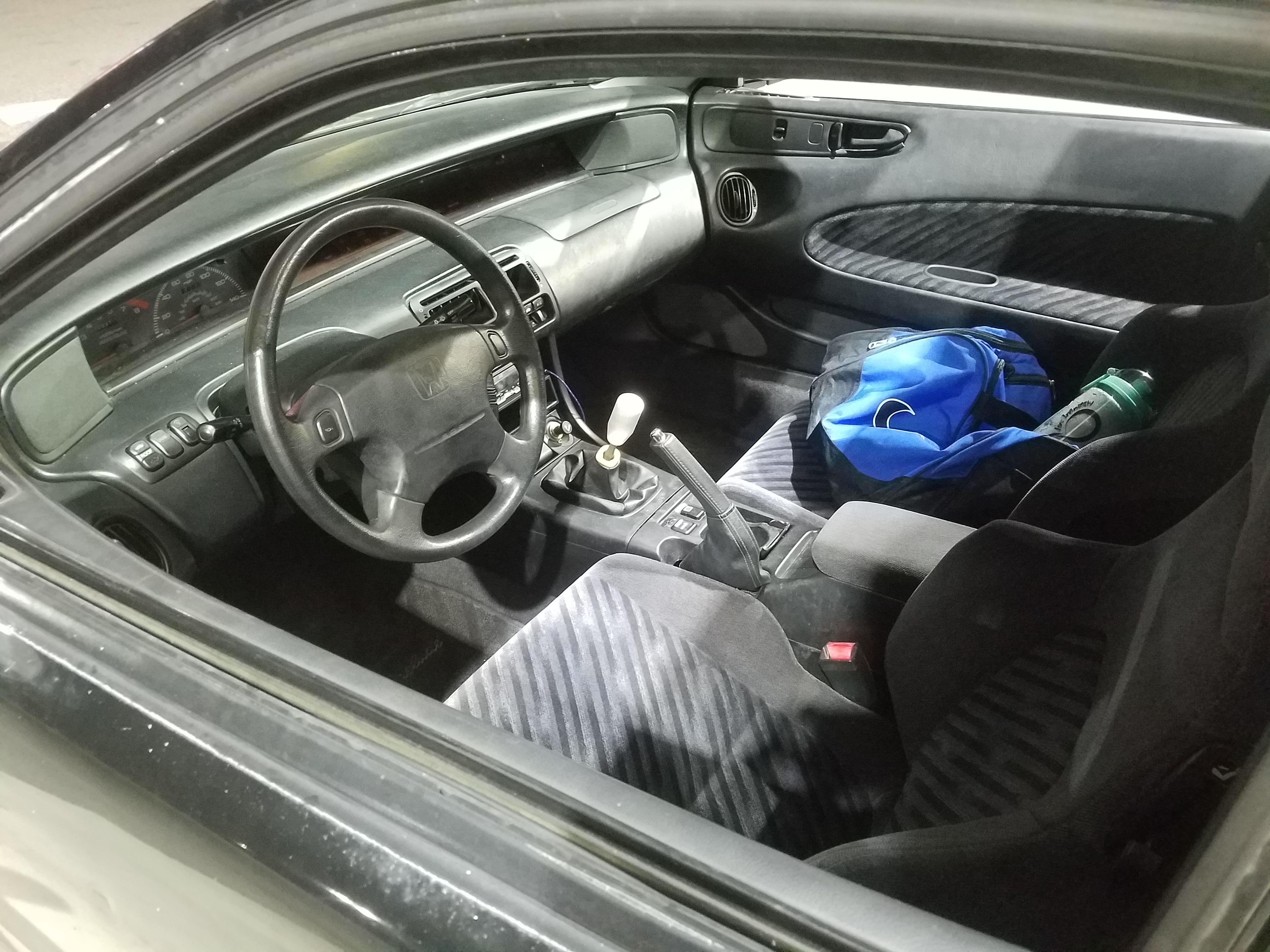 VIP
Update: It's the water pump leaking. Heavily. Wasn't leaking before so it must have just gone bad. Going to replace it this afternoon and see how it does

VIP
Water pump is fixed. Timing belt that was supposed replaced "a few months ago" was also on its way out so I ordered one of those timing/water pump kits and replaced a bunch of stuff in there. Now she runs fine again. I am in love with this car.

Moderator
VIP
I always liked the dashboard on these things.

BrutalB83 said:
I always liked the dashboard on these things.
Click to expand...

The interior is what hooked me, I love driving in it.

Admin
VIP
put some prelude si/vtec wheels on it, spray the hood/front end and sell it for 5500

It'll definitely look great with some fresh paint and bodywork.

VIP
Hopefully I'll get the axle replaced tonight. I have a bunch of spare parts for the F22 from my buddy's 96 Accord I did the H swap in, including a Greddy header which I'm going to install because why not. I'm hoping this car can just be a series of small, fun projects rather than have the stress of completely overhauling parts of it. If the motor goes though, I see that as an excuse for a swap.

VIP
Looking at parts prices and coilovers are listed as compatible for 92-01, are the generations cross-compatible or is it only certain brands?

VIP
Fixed the axle last night, took it on some curvy fun roads tonight and it did admirably. Really liking this purchase.

Admin
VIP
Suspension parts didn't change much across generations. Seems legit.
in civics, 88-00 all share the same spring more or less despite it spanning 3 generations

Moderator
VIP
I thought there was some variation in suspension between the 4th and 5th gen preludes, but maybe it was just the 4ws ones. My brain is a little fuzzy on that stuff these days. Like the strut mounting was just slightly different, but maybe the difference was slight enough that aftermarket can support both where OEM would use 2 different parts.

Briansol said:
Suspension parts didn't change much across generations. Seems legit.
in civics, 88-00 all share the same spring more or less despite it spanning 3 generations
Click to expand...

springs maybe but the arms, shocks and struts are different IIRC. only going from what i know with a buddy swapping his EK stuff to his EG.

Moderator
VIP
I think I've forgotten how to Honda.

VIP
This has been the car I've bonded with the fastest. For sure. She's slow but WOW is this car fun in corners. The interior really makes you feel like you're actively engaged in the driving experience. Over a month in and the honeymoon hasn't ended.

VIP
just wait until you have a really big build. Ask Wil about cars that are "fun in corners".

VIP
you can also ask me... or B16... i don't believe anyone else on the forum tracks regularly anymore. my 7th track day is this coming saturday.
You must log in or register to reply here.