Next up, track day June 11th, pending weather and going to buff out the paint now that it's good and hard. 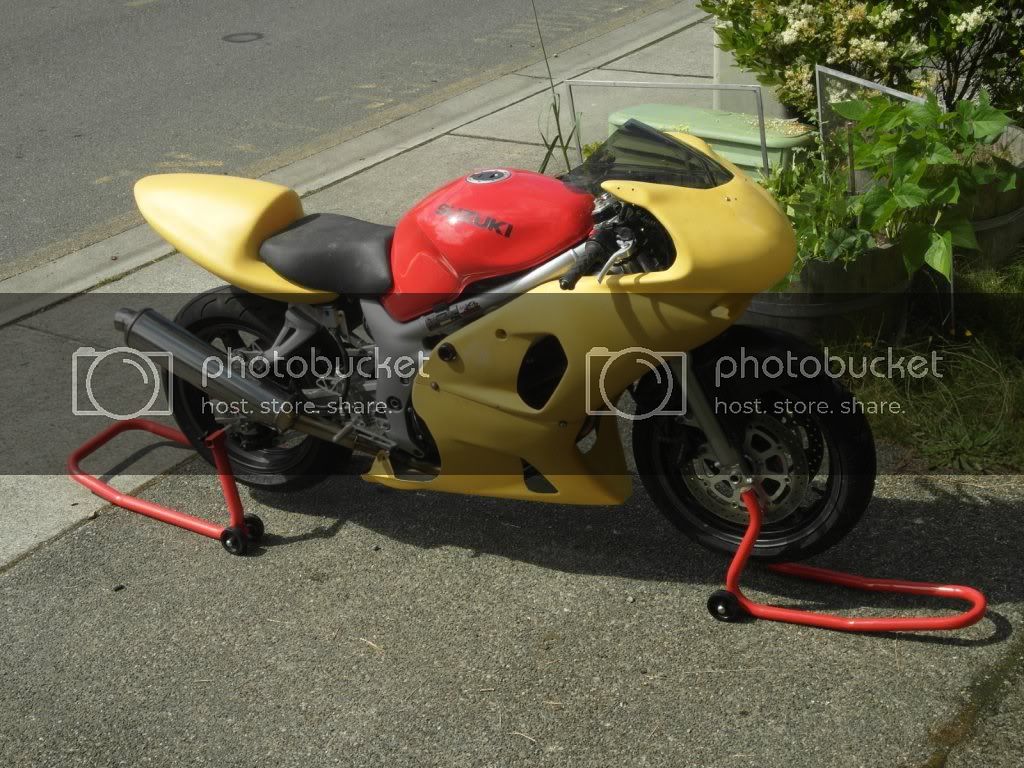 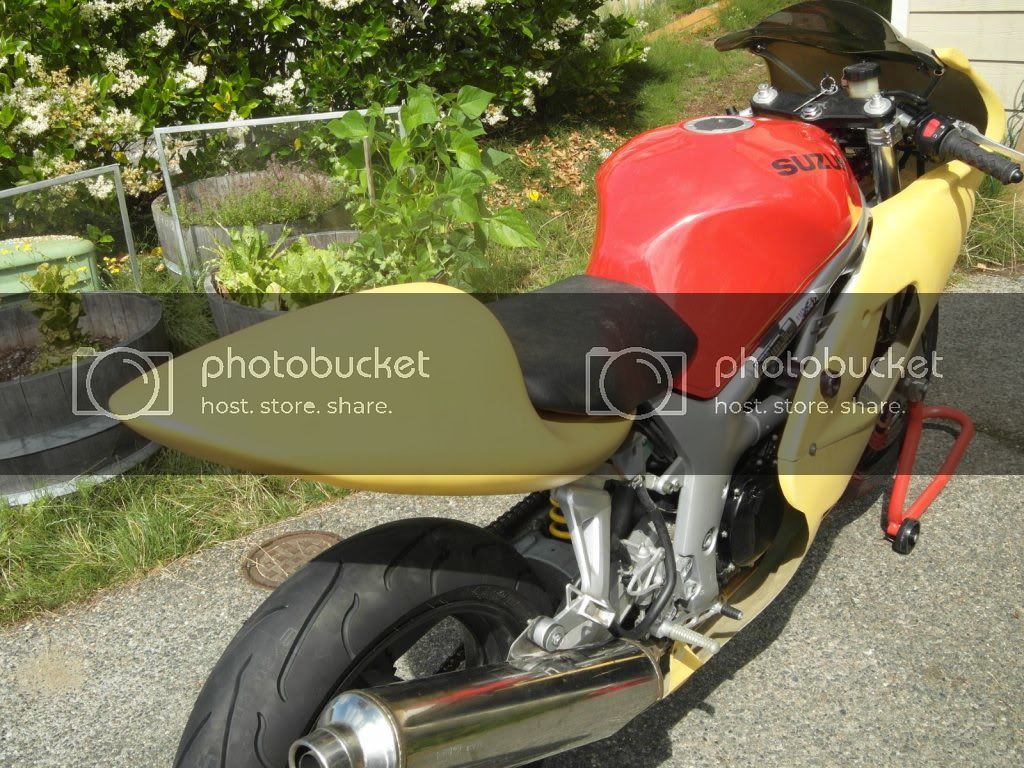 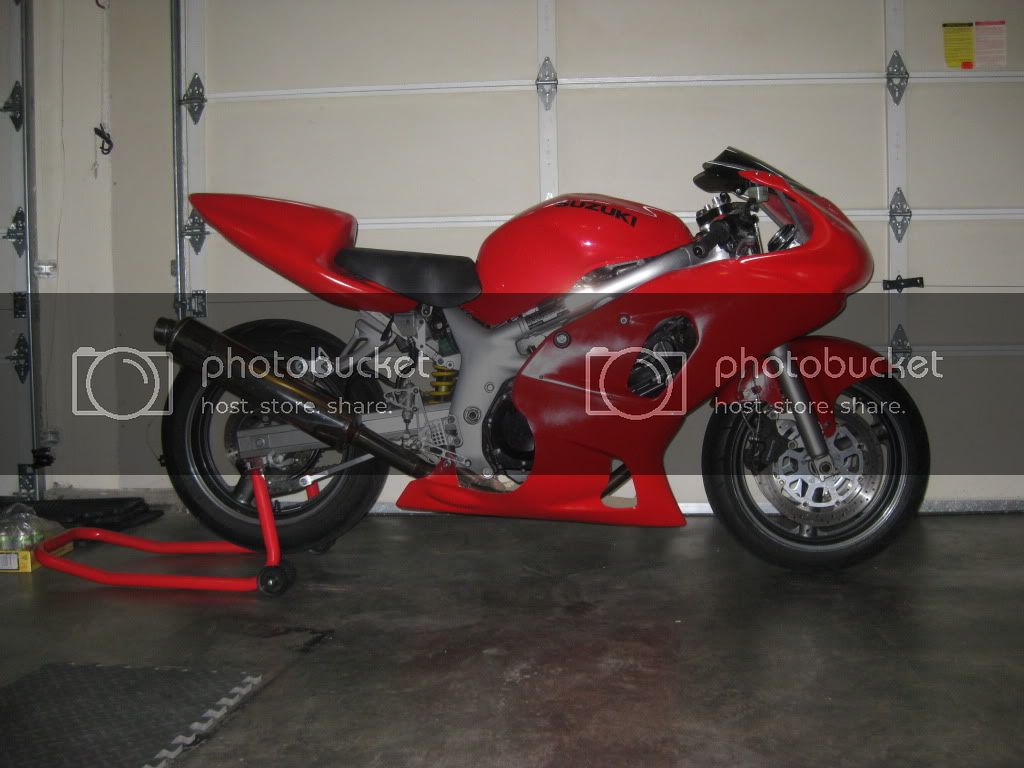 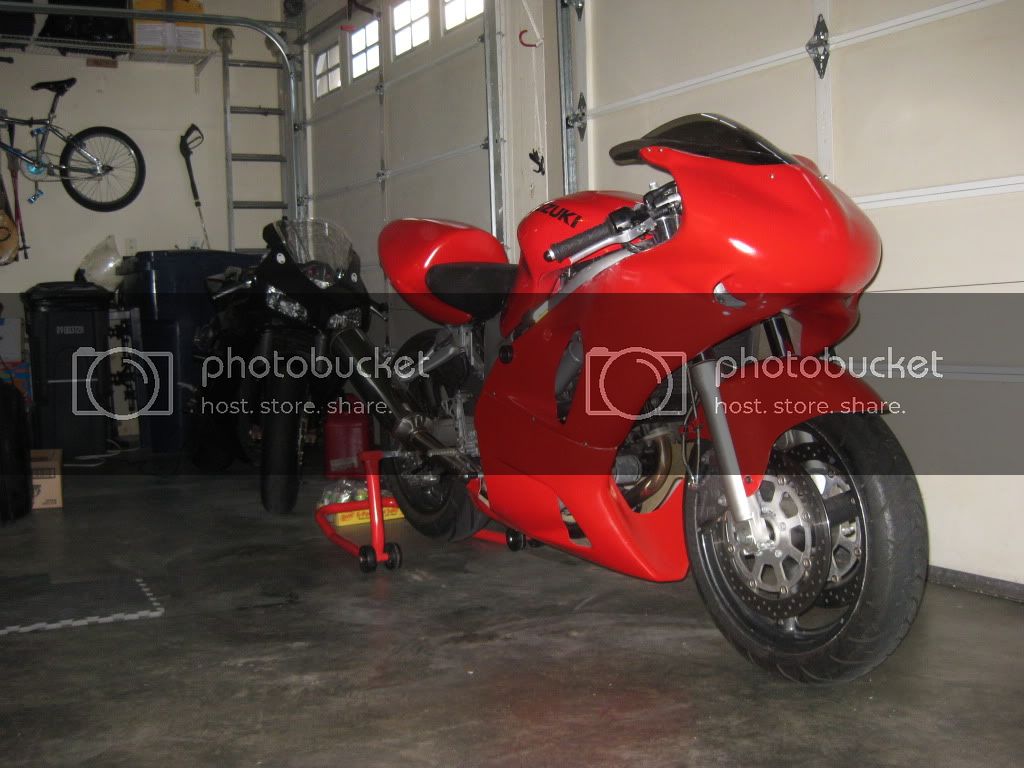 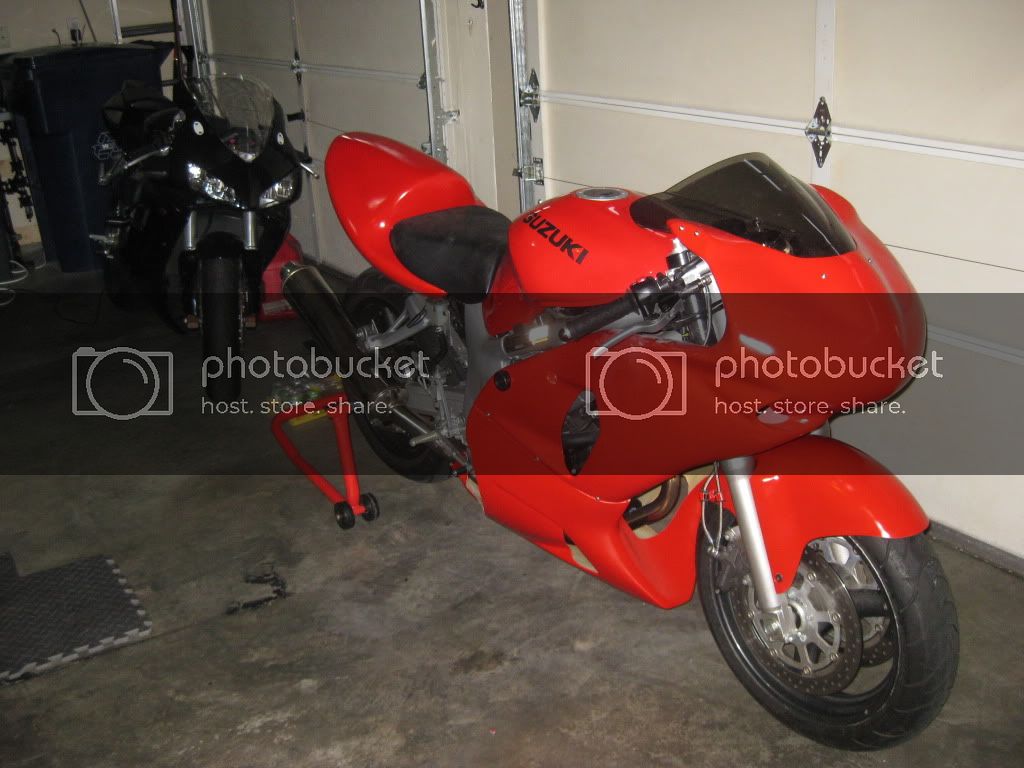 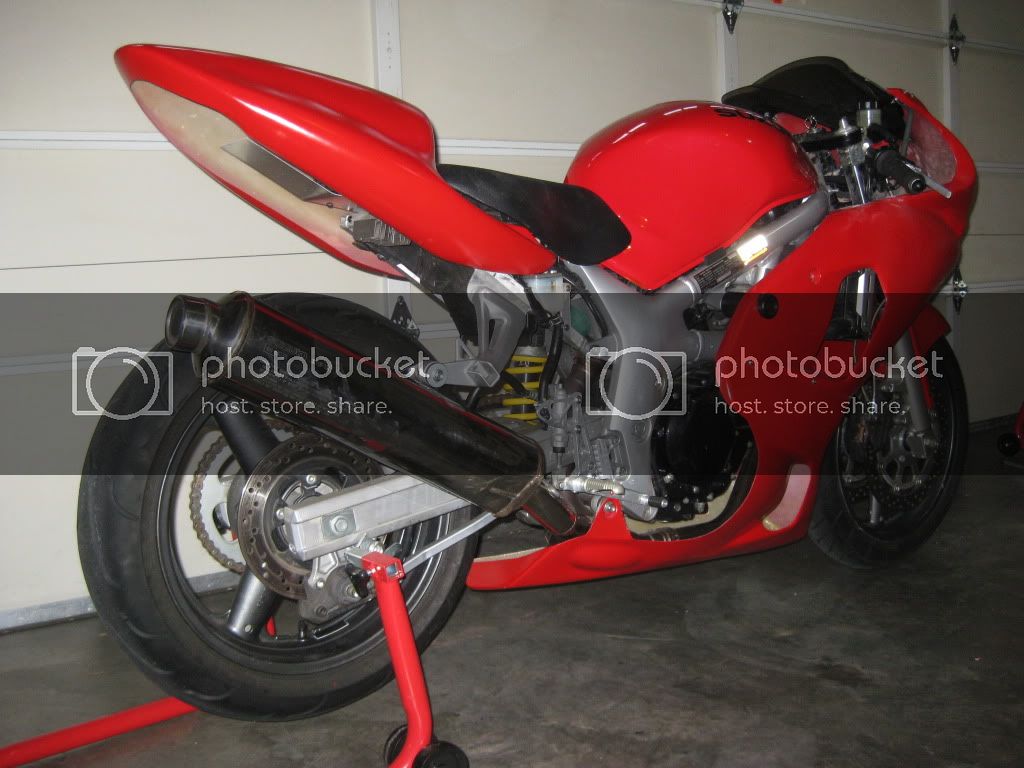 Neither of us were free until the next weekend, so I waited impatiently to finally see it in person. When I got there, the first thing he did was point out a tiny little hole in the gas tank and say "sorry, I didn't realize this was here, I'll knock a couple hundred bucks off of the price."

We bought this thing on faith alone, since we couldn't start it up because of the gas tank. We took it home in the trailer, and I spent the next few days washing out the gas tank and then blew it out with compressed air until it was dry, then let it sit for days. When I did finally get out all of the fumes, we looked around at the best way to fix the hole. Turns out brazing seemed like the only permanent solution, these first gen tanks are notoriously hard to find, and even harder to find without any major dents in them (mine has NO dents).

So we purchased a brazing kit, my Dad has significant experience soldering, but none with brazing. But there isn't too much of a difference between the two, other than temperature. I prepped around the hole, cleaned around it real good. Then my Dad brazed it closed. It now holds fluid! No leaks at all!

I don't remember who said it, but they said it looked like it had issues. Well you were right, it did! Spent hours going over all of the bolts torquing them to spec. Most of them were either loose, or not to spec. Re-routed most of the cables back to spec because this guy was an idiot when it came to mechanical stuff.

Only positive thing mainly was price and the fact that the harness is uncut, gotta love this.

Once we rectified all of the funny stuff with the bike, we threw some gas in it, (we had the battery on a tender from the day we got it). It cranked over for awhile until gas finally made it's way into the carbs because it was DeeeRuuuuuY. But after the first start, it starts up first try. It runs SUPER good. No misses, idles perfect.

Getting closer to being ready for June 11th!

Just picked up a 1 piece leather suit from an ex racer on SVRider.com $65! It's not perfect, but the seams are all good and it will pass tech. (It's obviously pre-rashed, but that's ok!)

Now I just need a helmet, gloves, and boots.

Working on painting the fairings, because they came mustard yellow

Going to go with a red to better match the tank.

More pictures to come, trackday video to come as well!

Make sure the suit fits you 100% correctly, last thing you want to do is wear gear that kind of fits because it was a beyond great deal. You can always resell it for more.

Make sure the suit fits you 100% correctly, last thing you want to do is wear gear that kind of fits because it was a beyond great deal. You can always resell it for more.
Click to expand...

Thanks Matt, I had orginally wanted to go with white, but it'd be a shame to repaint the tank since its already in good shape.

I don't mind so much since my current pair of pants are going on 11 years old.

VIP
Yea its hard to put a price on safety isn't it? Definitely gonna get a quality brain bucket and boots.

|Chaz| said:
Thanks Matt, I had orginally wanted to go with white, but it'd be a shame to repaint the tank since its already in good shape.
Click to expand...

I know what you mean there, I had a similar feeling after I began sanding my car down to repaint it Do you have a decent work space to work on this thing?

I don't mind so much since my current pair of pants are going on 11 years old.
Click to expand...

I love their stuff. I wore it when I raced dirtbikes as a kid. I abused the hell out of the boots and never had any issues with them. The only time I had to buy new stuff was because I grew out of the old stuff

Matts96HB said:
I know what you mean there, I had a similar feeling after I began sanding my car down to repaint it Do you have a decent work space to work on this thing?
Click to expand...

I have a little shed in the backyard, we put some ceiling to floor painters plastic on all the walls and I have just been spraying in there. There's fairly minimal dust in it too. Wish I had access to a true spray booth though.

Moderator
VIP
Can't see too well on my phone, but it does look much better as one solid color

VIP
Thanks Matt! I can't wait to take it to the track.

Moderator
VIP
Did you do any more riding this summer?

VIP
Yea, I've down three trackdays at The Ridge so far, one at Pacific Raceways and the other one at Portland. I have another paid for this Sunday at The Ridge again.

I may be trading my bike for a 2000 Gsxr750 that's been prepped similarly to mine, 125 rwhp though . I've gone from riding in the beginner class to getting bumped into the fast riders class.

Ok, just because I respect your opinion , I'll bite. But why not?

I am fairly experienced for how little I've been riding. But my riding group of mentors are ex-racer's/instructors and have all said they are impressed with how well I go around corners and that I could definitely utilize some more front straight speed and sacrifice a little speed around the corners.

Honestly, I am riding a fairly good track day pace. Not racer fast of course, because I'm not racing and ride WELL within my capabilities for safety's sake.

But I am still interested in what you have to say.

VIP
Same reason that I'd advise against trading it for a 1992 Ford Contour - cuz it's a bucket of shit.

That old GSXR isn't going to have much more power than you can get out of your SV, and it weighs a TON more....and more front straight speed does NOT make up for less corner speed, ask any novice racer with a 1000. You will NOT progress anymore by getting a heavier, poorer-handling bike just because it makes a little more power out of the box; if anything, you'll only hold yourself back. You get on the gas early enough coming out of a corner and get the drive onto the straight, and then brake late enough and carry enough speed out of the straight, and you won't NEED more horsepower to stay in the lead. I've won races against bikes making 20-25hp more than me MULTIPLE times, and they key is getting on the gas early, braking late, and carrying corner speed. I'd be curious to hear more of what the instructor/ex-racer that said you'd be better off with more power and corner speed has to say, and see how many (if any) championships he's won and with what organizations. That sounds like 'I can go fast at a trackday, but I don't race' instructor advice.

Additionally, there are still PLENTY of organizations with classes for SV's to race in; pretty much EVERY major club racing org has lightweight and SV classes - shit, CMRA has 4 classes that ANYONE with an SV can race in and be competitive(Formula 2, Lightweight Twins, Superbike D, Superstock D), and I've even seen super-fast guys on SV's do well in the 600 classes at smaller tracks. Old GSXR's, on the other hand - well, there aren't a lot of classes for 'em. You won't have ANY hope of being REMOTELY competitive in any 600 class, and even in some orgs that allow old 600's to ride down a class and run with the lightweights you won't be that competitive, because the bike just isn't capable of going as fast as a well-built SV.

On TOP of that, when you eventually get ready to sell that SV, there will be TONS of opportunities to sell it - people STILL buy those things all day, because they're EXCELLENT beginner racebikes, and even for an experienced expert racer SV's are fun and inexpensive to race. Try selling a 12 year old GSXR 600 - it won't be an easy sell. Honestly, I'd be surprised if you would even BE able to sell it, unless it was to someone who didn't know any better.
Last edited: Sep 6, 2012
You must log in or register to reply here.