VIP
I was reading an article about retirement and making your money last.
The article recommended a website to take an age survey.
https://www.livingto100.com/calculator

You will need to enter email and password to get results.

It takes about 10 minutes but the results came back saying I will live to 91.

Looks like I need to plan for a little more savings than I originally anticipated before I retire.
Last edited: Jul 12, 2017

VIP
This answer made me chuckle.

and I'll probably be working right up to the time I die. 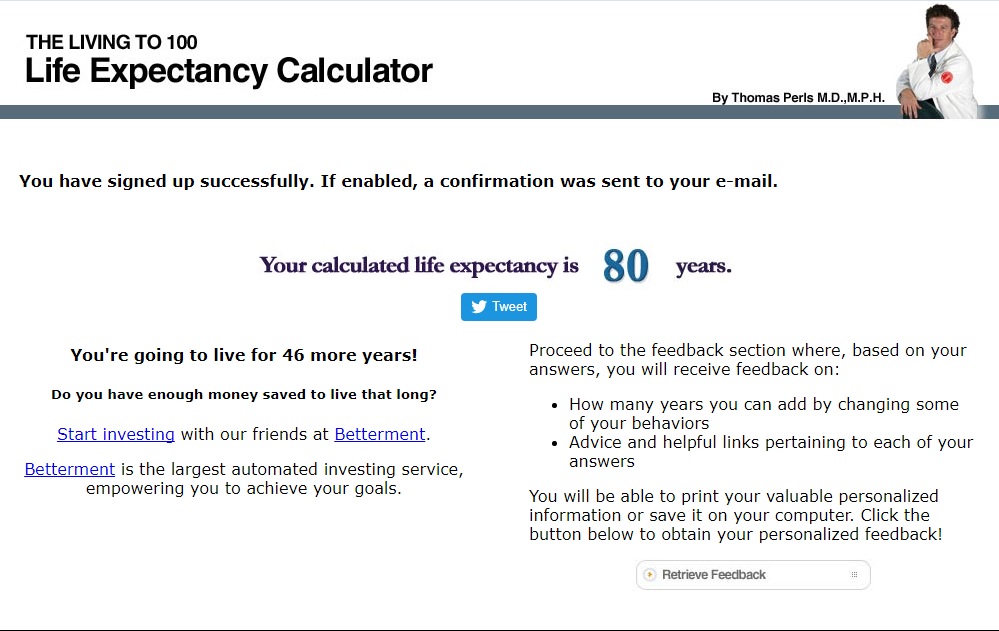 VIP
Ugh, i'm going to live longer than I want. I don't see much going on after 80. Hopefully Viagra gets cheaper.

Admin
VIP
I've been basing my numbers off the guess of living until 93. I didn't do this calculator.... will try it later. Ultimately, I want to stage myself so that basically no matter what age I die at, I will leave behind a cash legacy.

1 mil is not enough to retire on in today's money IMO, at least in the north east/west coast/dc areas, let alone 30 odd years from now when we retire. 1.5 is probably a bare min number I would consider today.

my goal is 20,000 a month in income at retirement age, and that is in 2045 dollars. or, 240,000 a year in combination of asset depletion/RMDs and income from holdings. I'm a pretty active market trader/follower and I can't see a reason to go so risk-adverse as to pull money out of the market when i'm older. That should grow at or above inflation rates for the retirement years, ultimately, dying with well into the 300k a year of income.

Sounds impossible to get there, but I don't think it will be. Assuming things stay about 'average' over time, I think it's possible.

Unless something DRASTICALLY changes with interest rates /bonds/treasuries, i will probably stay at least 70% in stocks even in to my late 80s. There's plenty of stable holdings with 5% dividends.. eg F, VZ and T. There's weird tax issues with MLP's but some of those oil companies pay out big. There's plenty of risk-heavy double-leveraged ETN products that pay 15-20% like CEFL & MORL and other a bit more stable CEF's like PCI/PDI paying 8-10%. Why earn 1% or less in bonds/cash? I don't care what the price goes to-- just keep paying me monthly dividends.


If AGE is for anything that I'm focusing on, it's when to take SS (Assuming it's still around). Spousal benefits and income bi-modals can drive this figure one way or another. my g/f is 5.5 years younger than me, so she will be able to claim SS spousal benefits off of me pretty early on (assuming we get married). It seems like the internet is full of info about waiting as long as you can to take it, but my math and some research says that this is not true. In fact, just taking regular FRA at 67 nets age 89 for break even, at 0% ROI on those funds vs waiting to 70. At 2% return, it's 94 years old. I'm PRETTY confident I can earn at LEAST 5-10% income off the money annually (as highlighted above), even if NAV of my holding decreases. Who cares! I'm not selling. i'm earning income off my holdings.

of course, 18% is uncommon and likely not sustainable.
but I also have far greater than 15k in assets that are working for me across various return channels, rates, growth, and income streams as anyone well diversified should be.

I think 300k is possible and probable without even touching capital, but there needs to be about 3 mil in the accounts.
RMD's may screw this... but i'm still working everything out.

Tax strategy is going to be key. I'm maxing my roth ira, and my hsa. my roth 401k is next, but i can't afford to do that just yet. it's getting some money, but not to irs limits. neither is my regular 401k. i'm taking the company match and focusing more on the roth and hsa areas. I'm approaching the IRS limits salary wise in the next few years where i can't use these products directly so i want to make sure i stuff them full while i can, and then when i can't anymore, focus on stuffing the other accounts.
When it comes time to pull from these accounts, SS will be a factor for how and what, but also being forced with hit the taxable accounts means it needs to be played correctly to bring in income that is TAXABLE to 15% bracket (assuming it's still around) and keep the cap gains at 15% as well, and take the rest of the needs from roth accounts to avoid the income on the books.
The hsa should be pretty flush by then to cover all medicare copays as well, resulting in little out of pocket medical costs.

Disclaimer: I have a long position in everything mentioned above, direct or indirect through ETF's.

VIP
84 years old for me. I plan on retiring at age 63 so that's 21 years in retirement I do not plan on having any debt such as loans or car payments or a mortgage. My retirement looks like this: Social Security estimates are based off my salary from like 2 years ago and obviously won't be accurate until much later in life

So i think together, if i am doing my math right, we are looking at a combined house hold retirement income of about at least $80,000 a year. Certainly not the lavish lifestyle i was hoping for but with no kids, and no debt, no need to worry about medical insurance, i think that will work for us.

VIP
Just got an email today that the government is shutting down the MyRA program.

VIP
I also received this e-mail.
If anyone is in the MyRA program be sure your contact information is still accurate so you can be notified when you need to transfer the funds.

I have seen advertisements on TV for the Schwab index'ed fund with really low rates.
Considering transferring the MyRA holding to Schwab, and input from you investment guys?


What ever you do, DO NOT TAKE THE MONEY OUT. DO NOT MIDDLE MAN IT IN CASH. Go direct institution to institution, or you're going to have a bad tax time.

reckedracing said:
I also received this e-mail.
If anyone is in the MyRA program be sure your contact information is still accurate so you can be notified when you need to transfer the funds.

I have seen advertisements on TV for the Schwab index'ed fund with really low rates.
Considering transferring the MyRA holding to Schwab, and input from you investment guys?
Click to expand...

I have a several accounts:
Interactive Brokers:lowest margin rates (not applicable for IRAs)
TD: I have about $100 in the account. I use their tools, resources, and analyst reports
Fidelity: my company 401k
e*trade: company stock program

yeah i would think so

VIP
So... I only have a small amount in the IRA thus far, but now that MyRA is closing down. I need some advice on where to move it to. I checked in with a local credit union I like, but their Roths are only paying out .02% at the moment.

Admin
VIP
yeah a roth CD from a bank is stupid....

open a roth IRA at fidelity or similar brokerage as outlined above.

contact fidelity help desk to initiate the DIRECT transfer from the myra to your new roth.

dump it all in ITOT, it's an iShares total stock market fund that tracks literally EVERYTHING on the stock market. It's pretty stable, but will track 'catastrophes' the same... you're young. just wait it out and it will come back. Everything that crashed in 2008 has more than returned since then.

In time, contribute to OTHER funds to diversify out a bit and actually see some gains, but have more risk. add $xx a month to it (up to 5550 a year) and when you have a couple hundred bucks, but a few shares of something else more targeted. We'll offer those suggestions later.