Ok, I'm car shopping.. Time to trade in my beloved 98 Jeep Grand Cherokee 4x4. Its been a great 6 years, but its time to move on.

I've been looking around at various cars, I'm looking for something a few years old, around 50k miles, good fuel mileage, and clean as a whistle.

Now, you might be thinking, where are all the hondas? What about the fit? The civic? Isn't the acura getting a little old for this list? Well, honda build quality has suffered to the point that I'm ready to venture elsewhere. I am a hard core honda fanatic, sitting here on a honda site wearing a honda shirt, with a honda parked out front, and a few more out back. But my ownership of one of the new elements has given me doubts. Issues such as speaker grilles falling off, and rear camber issues that plague the awd models with no backing from honda. $400 later my rear camber is corrected via aftermarket means, but honda offered no solution other than "Yep, its a problem". There are other minor issues, nothing major except the camber, but its a damn near new vehicle, there shouldn't be issues.

Anyhow, I love my jeep, it kicks ass and takes names and is in every way the perfect vehicle... except for fuel milage. Babying it yields 16mpg. No good. The kids have grown up enough to open doors themselves, crawl into the back, and buckle up, so there is no need for this thing to be a SUV or even a 4 door.

I want GOOD gas mileage, and something that can haul stuff (hatchback is very likely) 4 seats minimum, 5 would be nice. 2 door actually preferred because I've never been a fan of fodos. Also, I am going to *gasp* put a trailer hitch on it and purchase a small trailer for hauling crap. I know the element can't handle it at all.

So, reviews, ideas, suggestions... The golfs seem to be the top contenders, being that the tdi is diesel and thus has both torque and good fuel mileage, and the gti is a sporty little thing..

VIP
open to 5 door wagon type cars, there are quite a few interesting models to check out?
i looked at the vw's but the gti's seemed to be a bit overpriced.
i would stick with the vr6 gti for towing vs the 1.8t

i dunno how good the yaris would be for towing but i like the look of them
ep3 is also out of the question?

I've had my eye on the new mini since it came out, but no, not a clubman. I would go for a cooper except I hear they have lots of issues.

And as far as towing, I'm only looking to tow maybe a 4'x6' trailer with a couple hundred pounds of camping crap on it. Coolers/tents/gear/etc. Stuff that would normally have gone inside and on top of the jeep.

Really? The Clubman seems to be the man's mini.

Its a wagon.. I have a mental block there. VW makes some sexah wagons, but I refuse to own one..


Perhaps what I'm really looking for here is a good reason not to buy the tdi/gti. They are both awesome good looking vehicles with their own strengths and weaknesses. But as with anything else, there may be a "don't fucking buy that" for whatever reason. Kinda like the Del Sol.
Last edited: Aug 6, 2010

Moderator
VIP
i use to feel the same way until i got my protege5... i am completely sold on the benefits of a wagon now

Rest In Peace
outback or legacy wagon... I've loved mine...and they can go anywhere, and get decent mpg's. $180 to add a class C hitch.

Rest In Peace
wow...TX has a shitty selection for subaru's...on CL.

Yeah, subarus are rare birds around here. Hell, the only stealerships I have local are chevy, dodge, ford, and toyota. everything else is over an hour away. And besides all that, it takes a special person to love a suby, and I'm not one of 'em.

No mazdas. Ever. I'm leaning toward german engineering... Just to see. Kind of a life experience type thing. I'm not going to own this thing forever.

or, you can call it an avant

So sexah. Someone buy that.


Even considered some bimmers. A little wary being that there are no dealerships for 100+ miles, and I like to work on my own vehicles. *and* I'm not looking to spend a fortune. Used bimmers are usually pretty cheap though.
Last edited: Aug 6, 2010 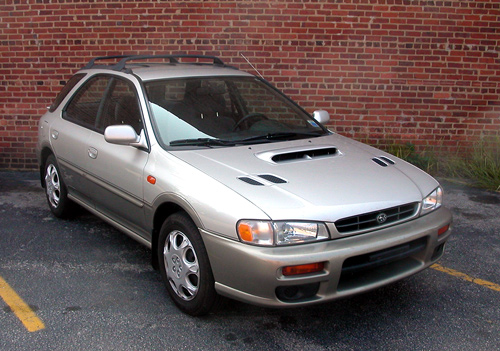 VIP
i have had bad experiences with volkswagens... i would never even consider buying one. my fiancee used to have a 02 golf... it was literally falling apart, needing many thousands of dollars of work at 80k miles. it was like every couple weeks something new would go wrong. i have a friend with a 03 vw beetle, same situation with it. my cousin is a parts manager at a vw dealer and even he admits that they are not the best built cars.

a mazda3 would be on my list if i was in your shoes. i also like nissan maximas a lot, its a fun to drive four door.

^I can attest to the falling apart at low mileage. My lady friend's 06 golf w 60,000mi needs a new transmission, and it's completely non serviceable, you can't even check the fluid in it.
You must log in or register to reply here.

Help me pick my new project/toy
2