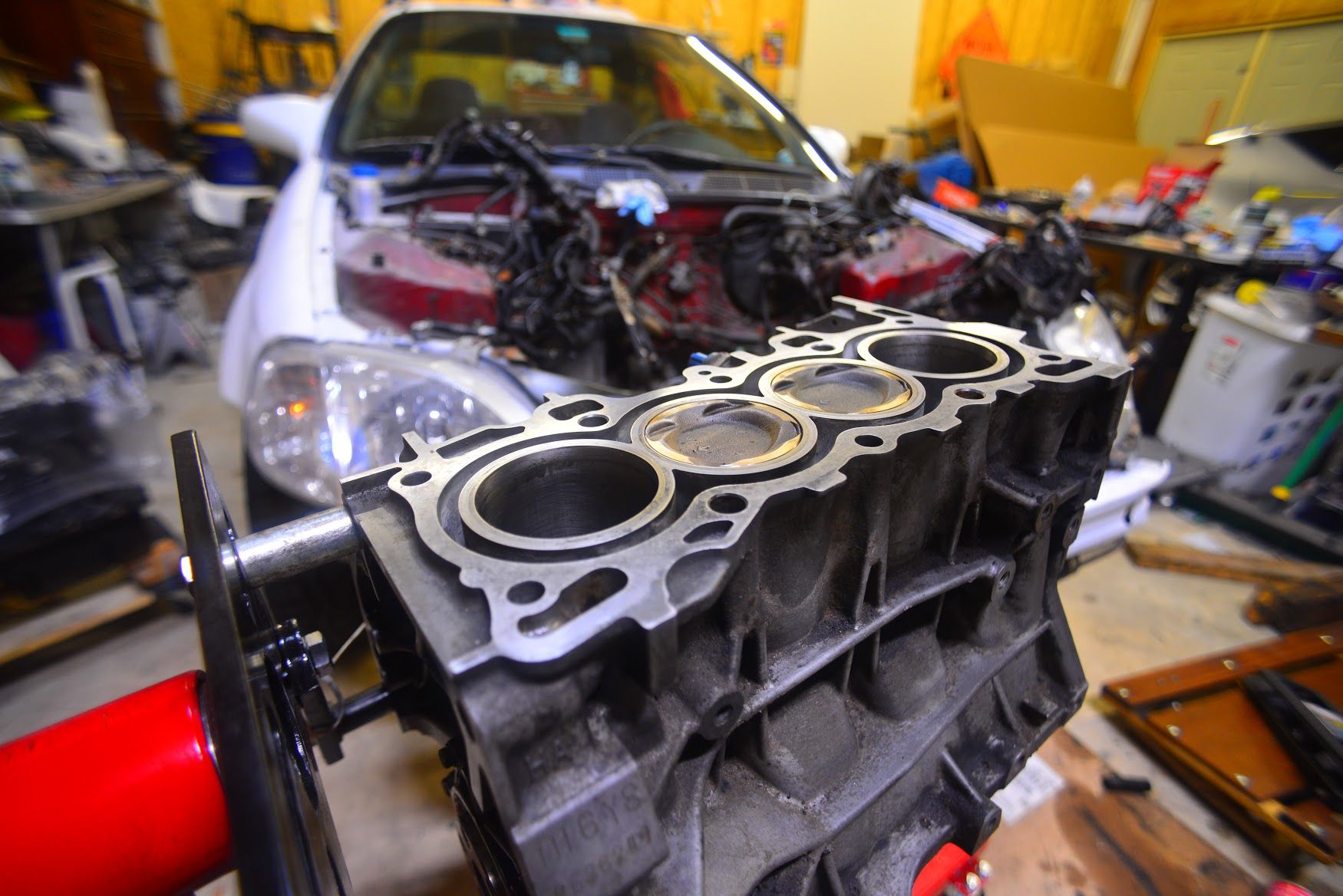 VIP
So. Got a bunch done. Shortblock is as put together as it can be until I get the head and transmission on it. I got an upgraded oil pump, but it turned out to be the wrong one, so yeah. Ate that one. 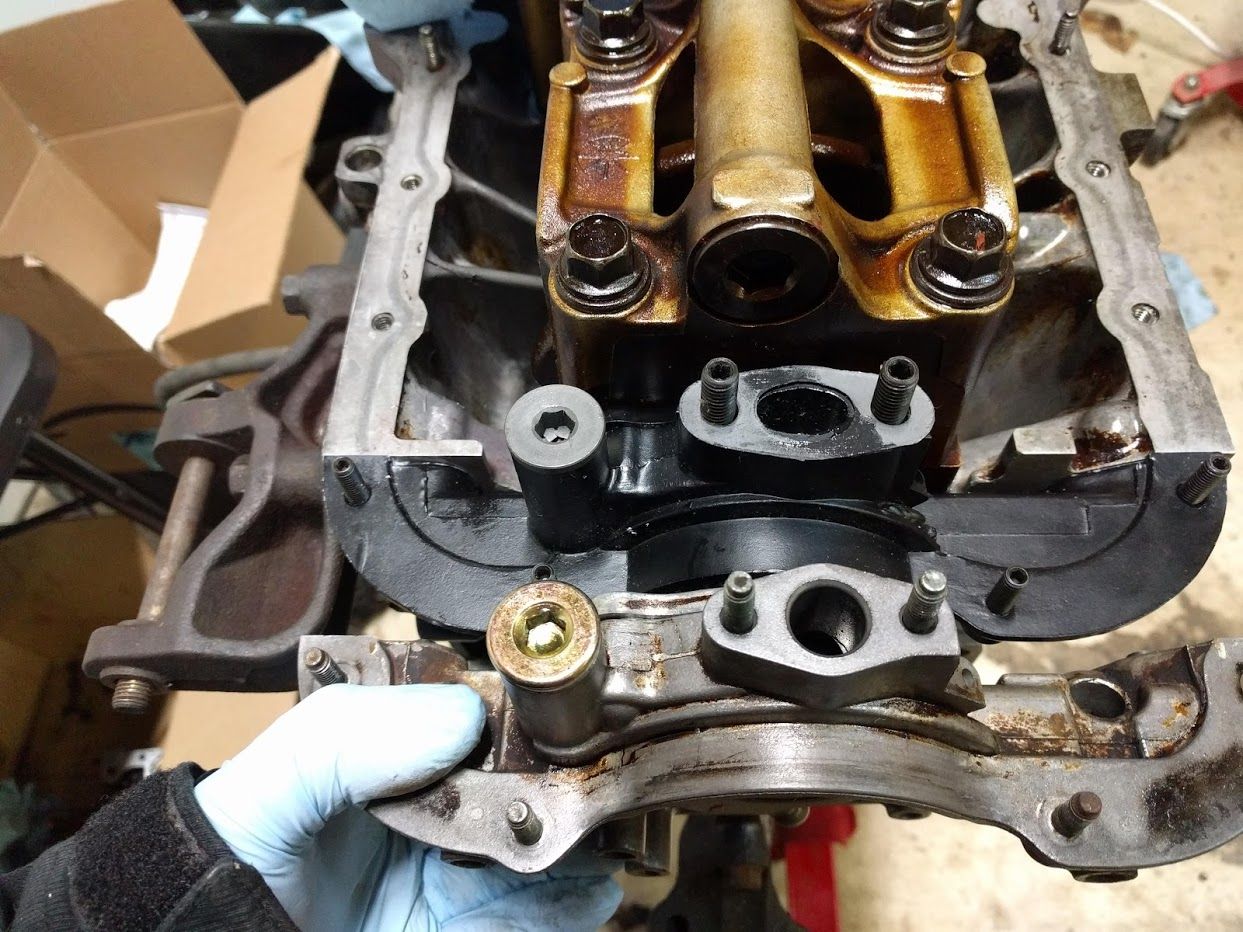 I got a line on an Si cluster, so I picked that up. 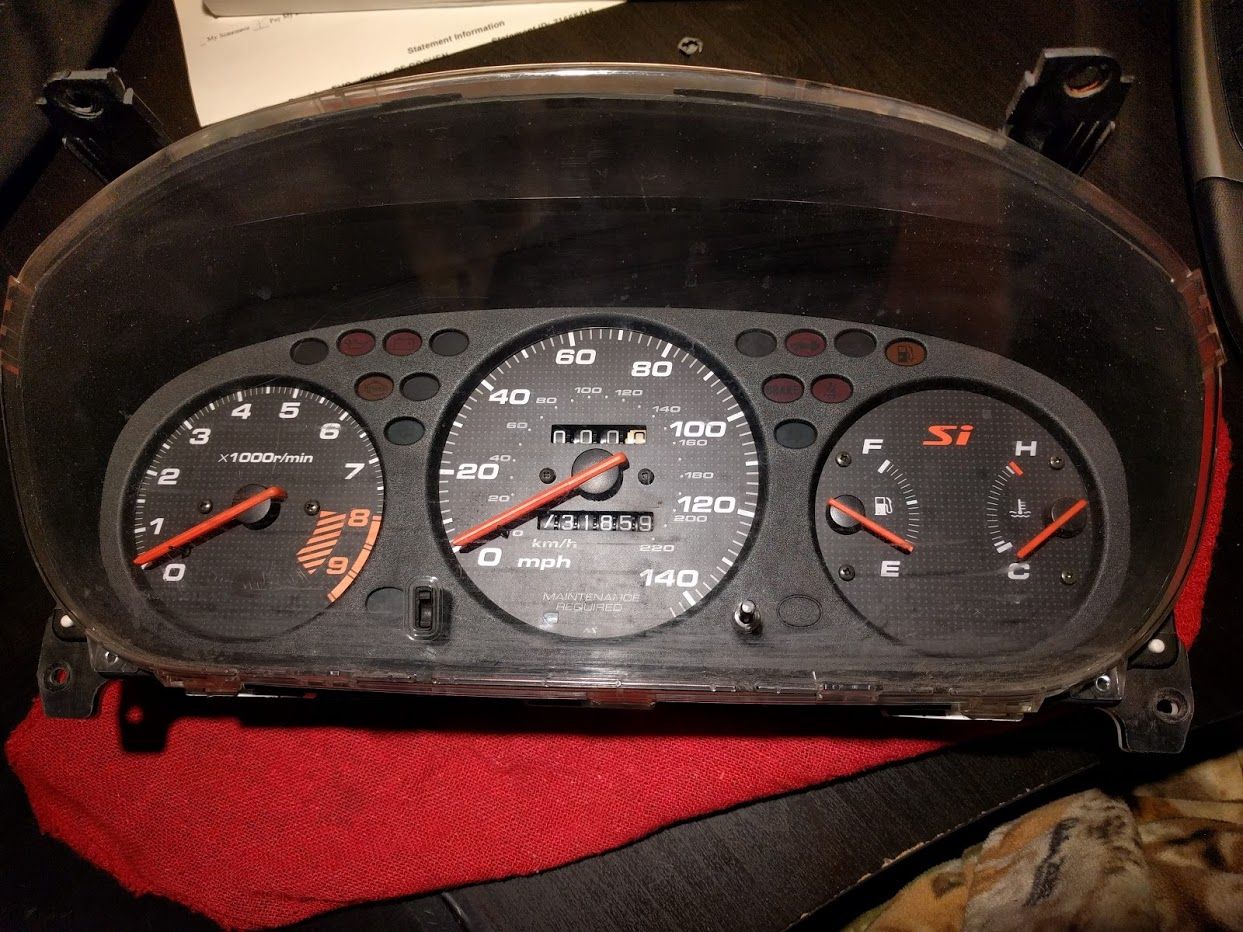 I picked up a bunch of transmission parts, including a full m-factory 3.086 first, and their close ratio 3&5. It puts 5th at 1.0 ratio, so I may elect to not use that and keep an overdrive gear for highway cruising. 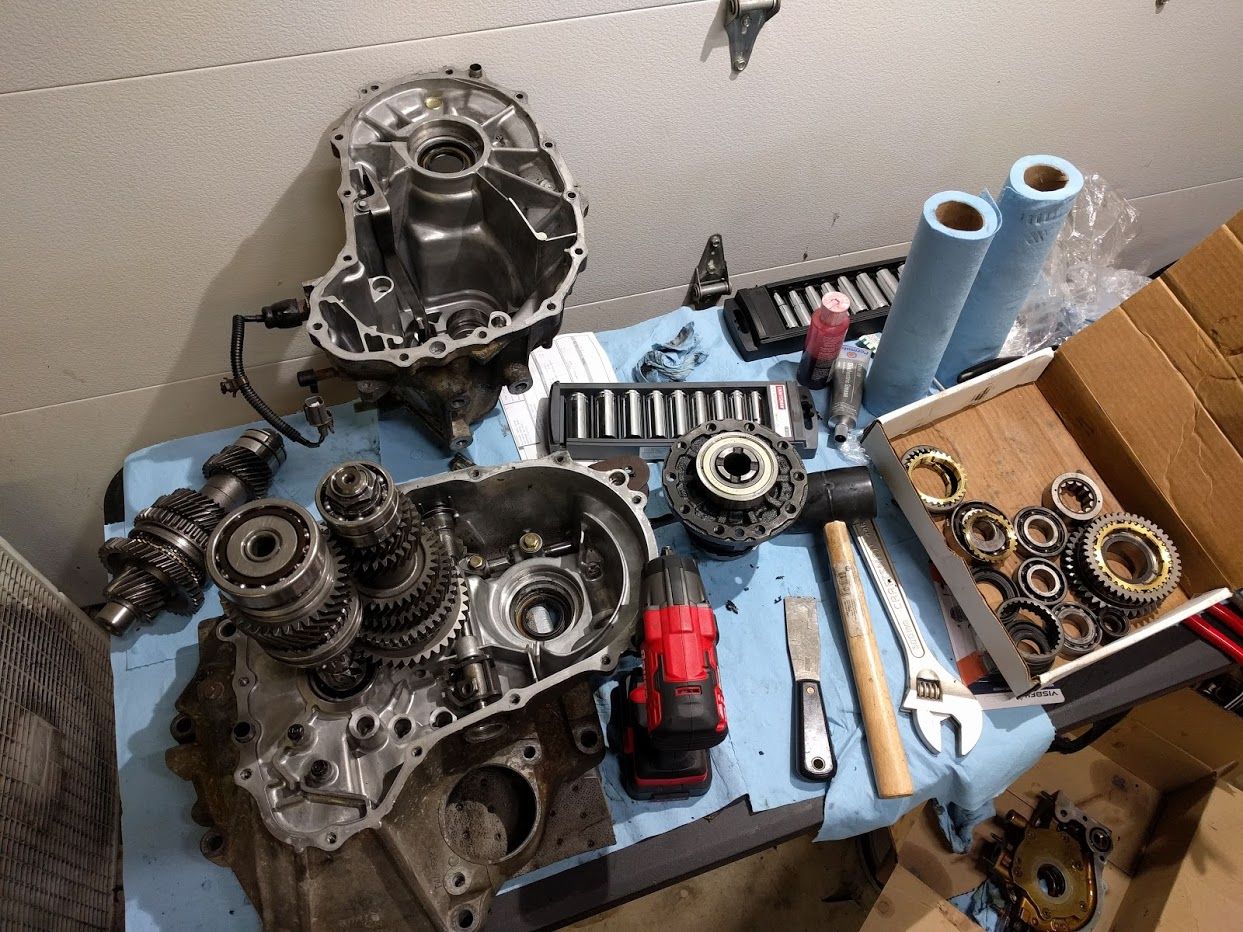 Now I just have to learn how to assemble/rebuild Honda transmissions now... Lol 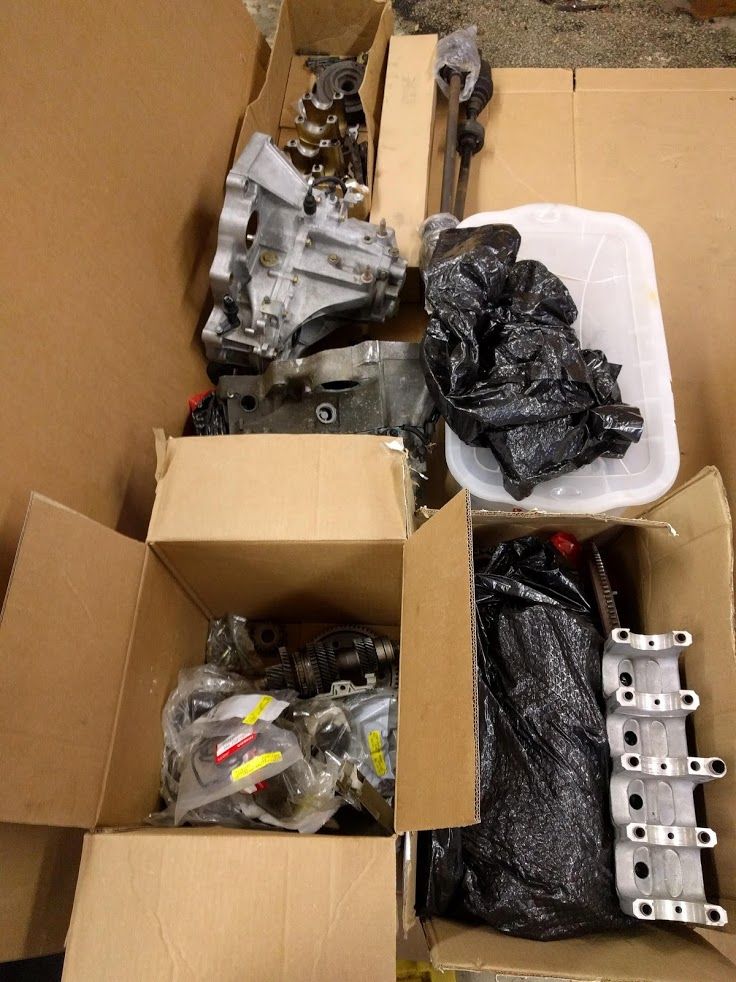 awptickes said:
Now I just have to learn how to assemble/rebuild Honda transmissions now... Lol
Click to expand...

They're pretty simple. I figured out my B16 trans at 18 years old. Lol

Matts96HB said:
They're pretty simple. I figured out my B16 trans at 18 years old. Lol
Click to expand...

Yeah, not concerned about it, I printed out the manual pages, I'll go through those and figure out what's up.

I just threw down some serious coin and got an m-factory LSD, and various other speedfactory d-series transmission detents and springs, so hopefully this transmission will be nice when I'm done with it. 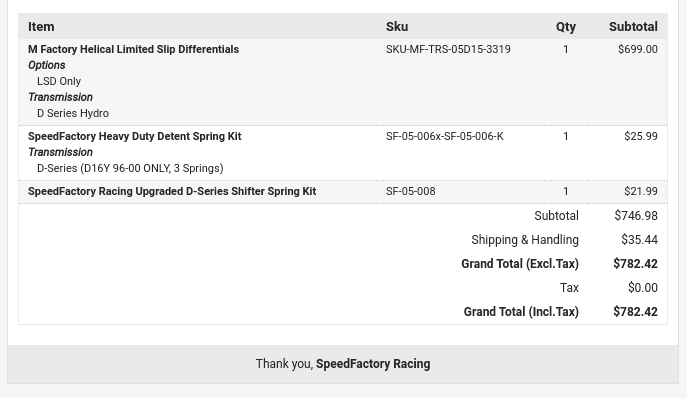 VIP
So, got some stuff done. Installed the shift forks, fixed the synchros on 2nd gear with a small file, because it looked like someone had been a little hard on the gearbox. Rest assured, there will be no Granny Shifting on this gearbox and instead Double Clutching like you should.

mFactory helical LSD has the bearings on, I'm going to have to figure out something on the ring gear... I can't get it off even with my 450ft/lb 1/2 impact gun. I may just buy new bolts and use one of the 4.25 spares I have, lol. 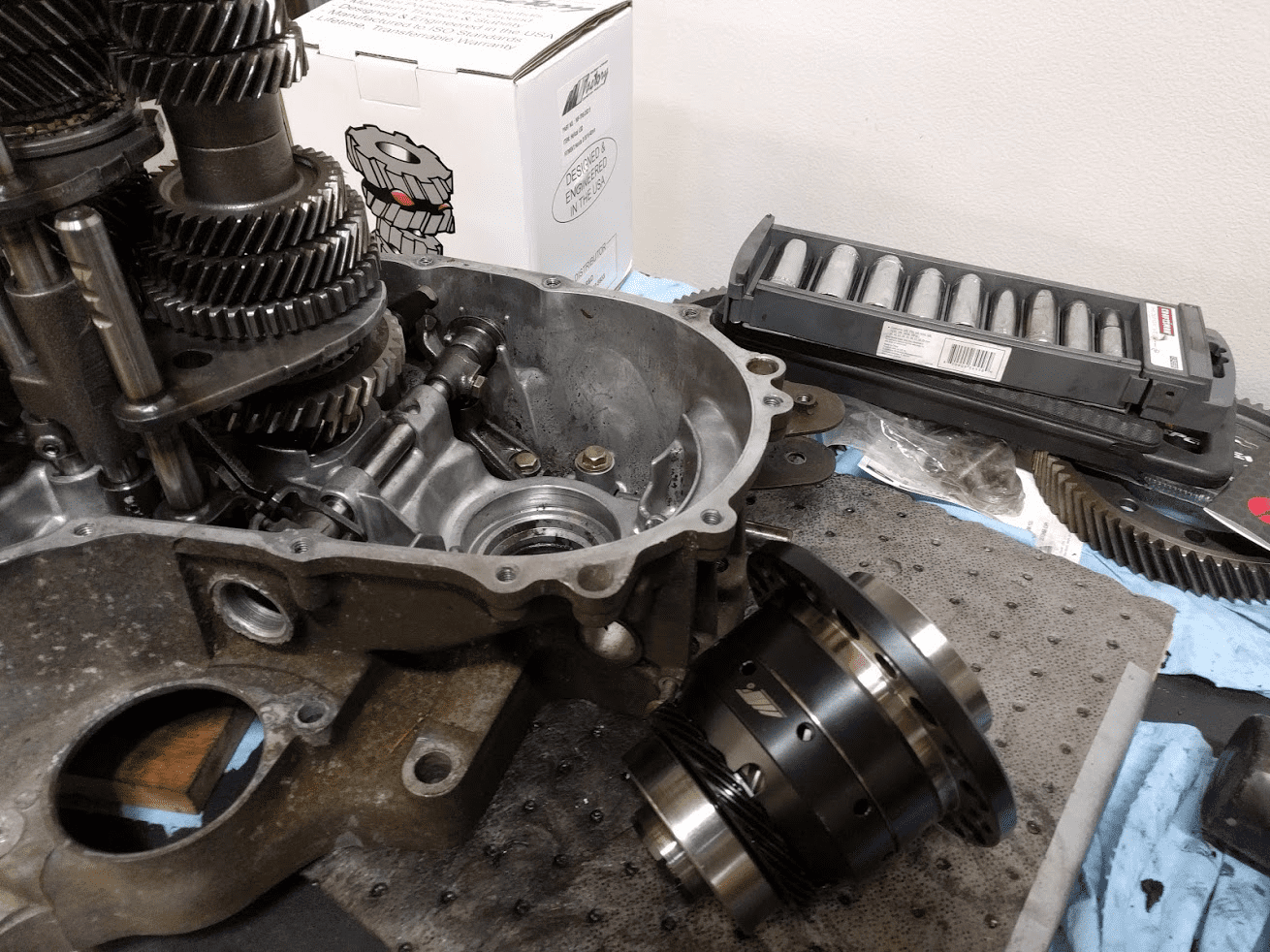 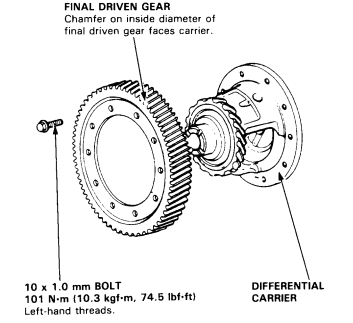 And, got it all buttoned up, checked clearance, and it's all good. Now I just have to buy another tube of RTV that isn't all dried up, lol.

I may, in the future, swap the factory 4th for the mFactory 5th gear. But we'll have to see how it drives. I don't recall any issues cruising in fourth, and this now has basically 4th as the top gear, but who knows if noise will become an issue with an additional resonator in the exhaust.

any chance you have an axle stub you can stick in to make sure it all does what it's supposed to?

Moderator
VIP
Sweet! I put an MFactory LSD in my Civic. It served me well.

VIP
Tis all assembled and sealed up. 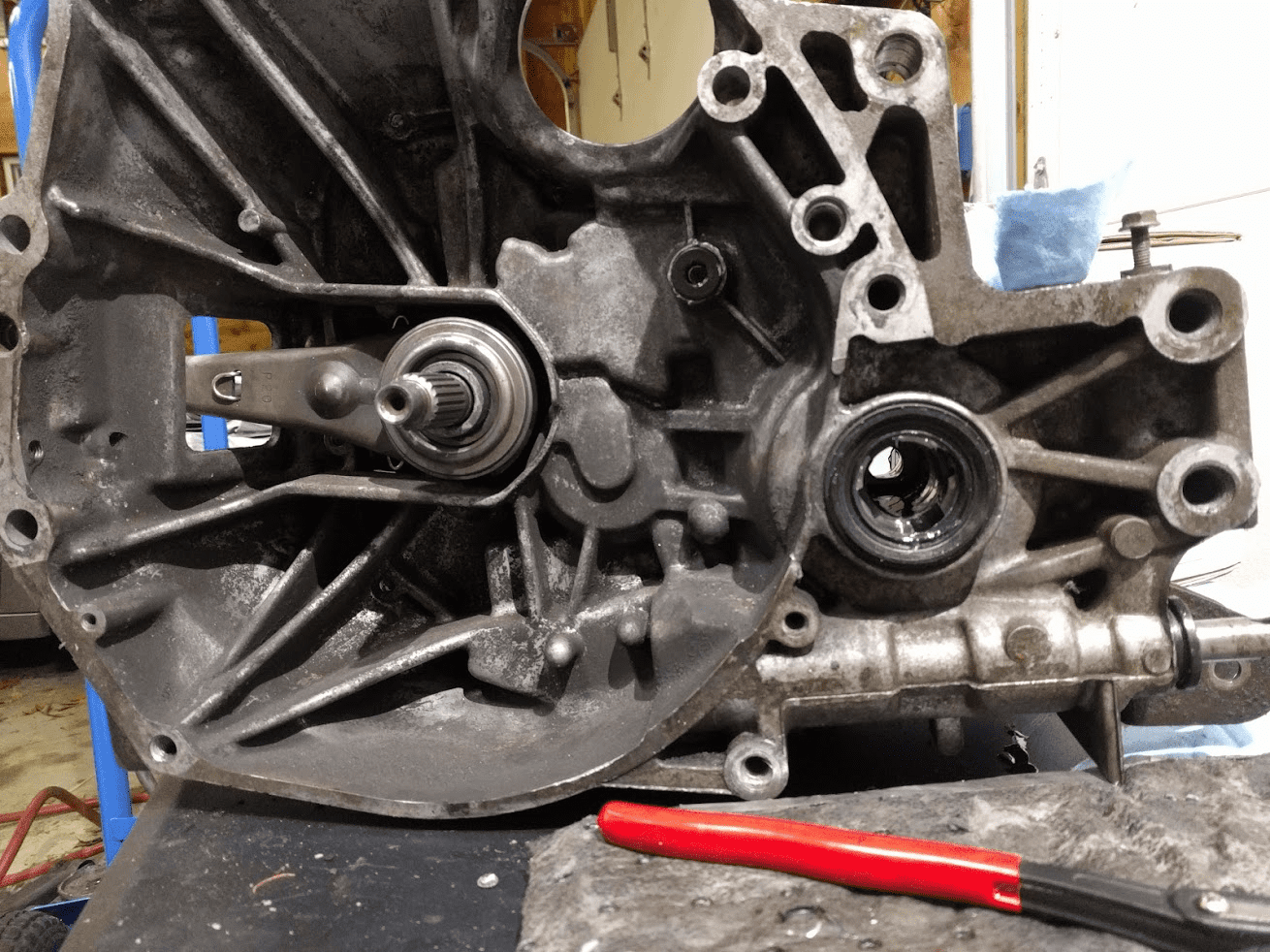 It's gonna be slower than it was before on the strip, mainly because I'm effectively adding two gears between 2 and 3, but it should be a blast to drive. No more 160mph+ runs on the highway, but that'll keep me from dying on the street/highway I suppose. Also means traction is probably going to be an issue for a while. I may wind up swapping out all of these short-ratio gears back to factory length, and leave the long first, but we'll have to see how motivated I am to pull the transmission again once everything is all back together. 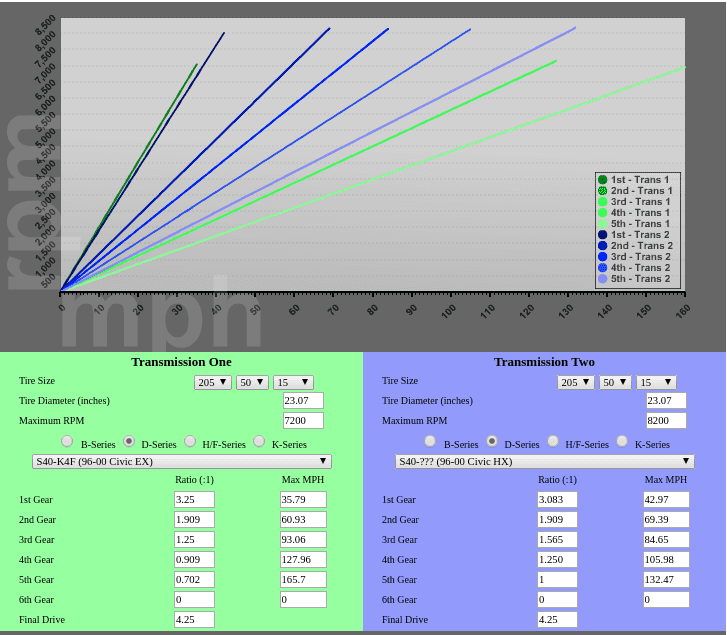 I'm getting really excited to drive it when it gets warm.


It's going to be interesting when I take it to a Honda dealership to get the airbag replaced under the recall... I think I might bring a friend to witness.

VIP
So, oops. I put in the little plug/rod thingie without lining up the other parts... 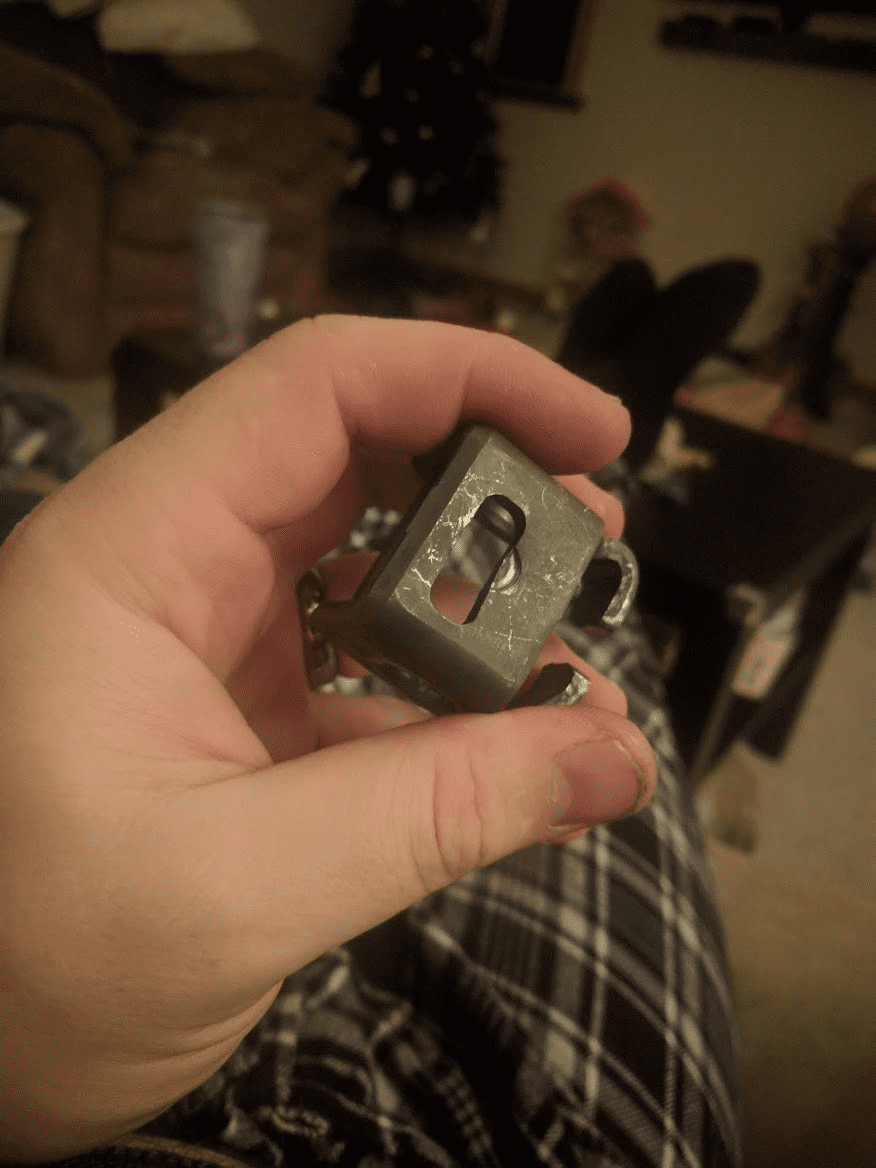 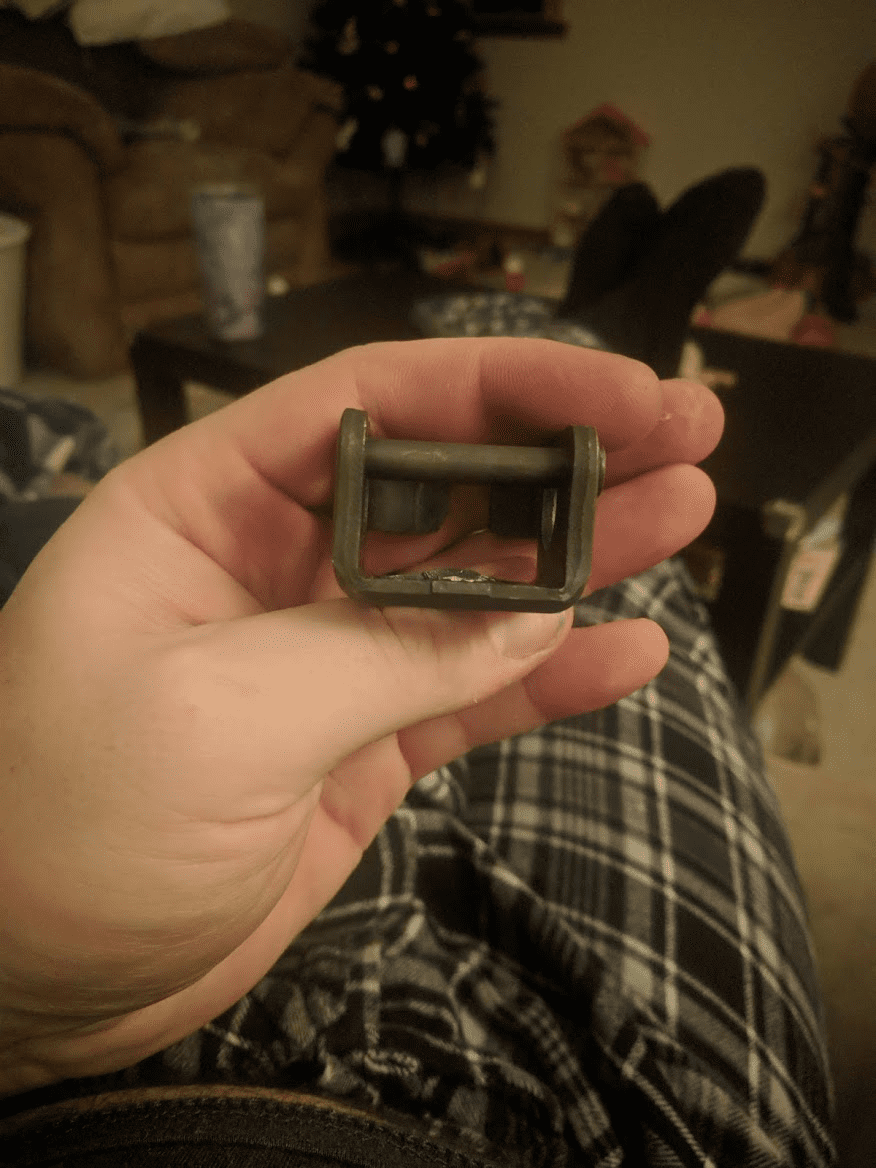 Mangled it up pretty good. Cool thing is that it took me 38 minutes to open up the transmission, pull the gear stacks out, pull the diff out, pull the selector rod out, replace this little guy, and re-assemble and re-seal the whole thing.

Hopefully that's the last time I'm ever in this transmission.

Admin
VIP
The few times spelling out transmission saved you

VIP
I've been slacking on updates: 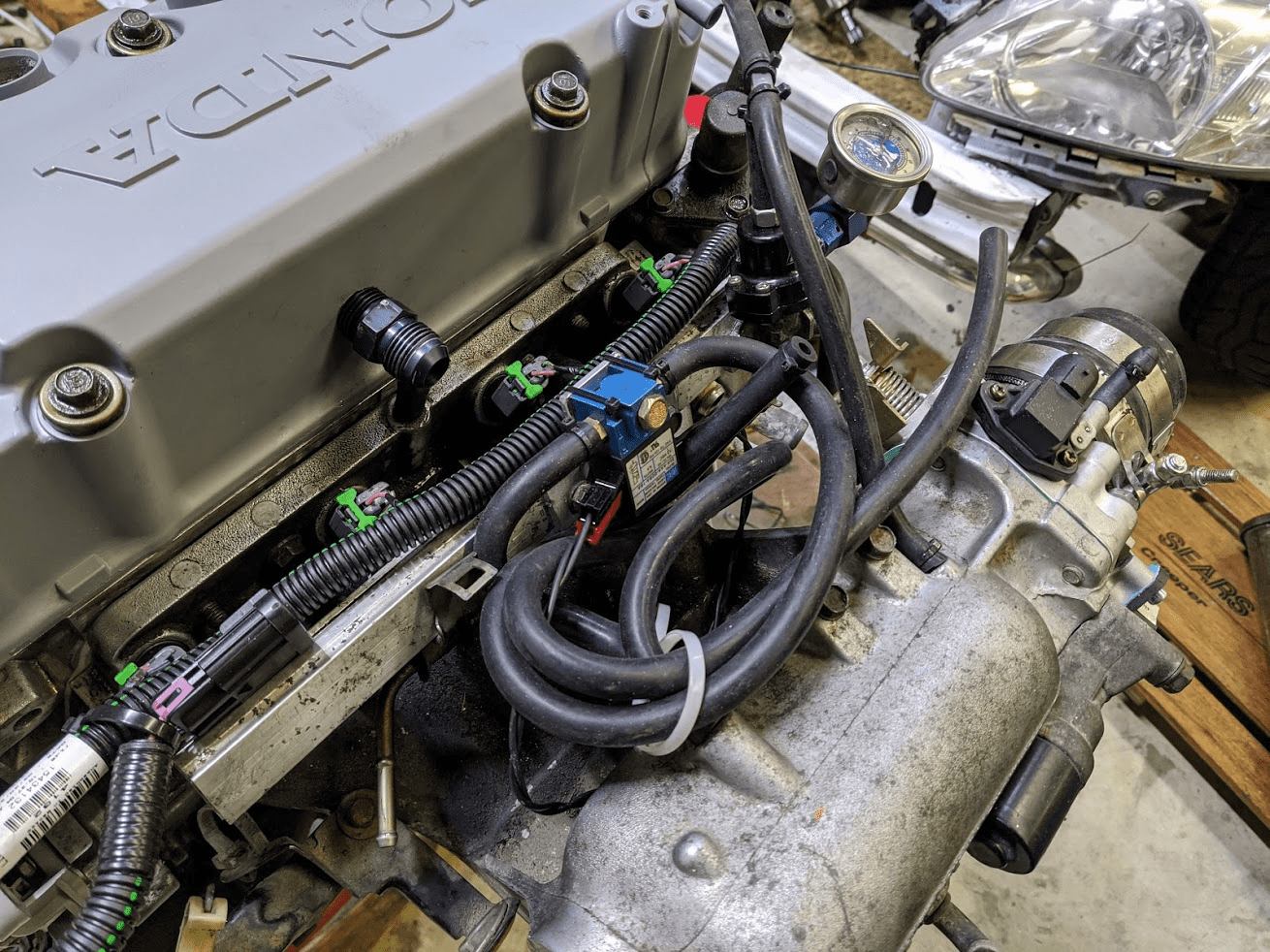 I realized that the intake manifold was "air injection" and that might have been the cause of my low vacuum, so yeah. I plugged up those with 10-32 set screws and loctite.

I finally got the engine all together, next steps are alternator and transmission, then I'm gonna drop the engine in. Unlike most people, I'm leaving the Crank Position Sensor intact, for reasons y'all will see in the future. It has something to do with the HondaRulez ECU Tamer pictured up there.

I've gotta find a new place for the boost control solenoid, since where it is gets in the way of the valve cover breather. Which the valve cover is painted in a baller satin grey.


Speaking of breather: Cheap chinese d-series block breathers use the wrong thread, so I had to fix that. 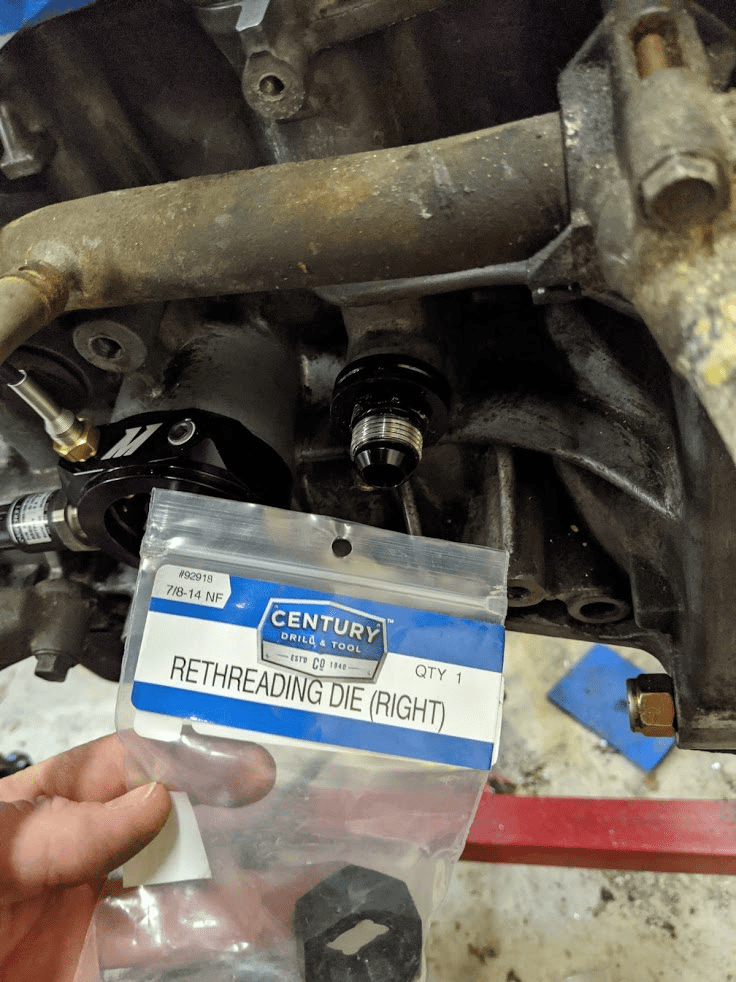 Now I've got a nice catch can too: Unfortunately, now I have to put the battery in the trunk, which is going to make things interesting... Now it needs a box, and a cut-off switch... Not happy about the switch, but whatever, I'll try to be NHRA-Legal as much as I can.

Speaking of which, anyone know of an SFI 18.1 legal harmonic balancer with an AC pulley?

VIP
For the battery relocation: I now have all the fuses, fuse holders, wire (2ga and 4ga), terminals, and now I need a box and a switch. Uninteresting pictures, so I didn't take any.

The flywheel is on the engine, again. Funny thing about that. I seem to remember being able to put the bearing into the flywheel with the engine on the car... Apparently that's not the case. I started to do the valve lash, but totally forgot where I put my feeler gauges, so that's getting done later -- tonight maybe. I modified the clutch fork to install the puller-style slave cylinder, and got that all taken care of. This should give me a bit more room to work with on the cold side. It's about time to make another list of "things to do" before the car show/race on the 8th.
Street Wars MD - Imports vs Domestics Drag Racing and Car Show

In a general order, broken up into "wrenching session", divided into category of task, but in order of dependencies:
Set valve lash
Remove axles from chassis (probably going to have to pull the front LCAs)

Then, do the first startup stuff and hope it doesn't blow up again... Lolol.

VIP
Are you going to put a sticker on the dash that says "be careful, you need to drive this home..." ?

VIP
I'm so close to the track I could flat tow or get the roadside assistance to tow me home, lol.

VIP
@GSRCRXsi came over today to return some stuff and so I could borrow his battery terminal crimper. I got some help putting the clutch on, pulling the engine off the stand, and getting the transmission bolted up.

So, gonna fill everything with oil later today and get those items checked off the list.

Pictures later, the forum says they're too large. I think I'm gonna put some oil in the transmission here in a bit. VIP
Is it just me or shouldn't the axles be in before filling the trans with oil?
Especially if you need to lean the motor assembly back when hoisting/mounting it in the front elevated car?
You must log in or register to reply here.
Share:
Facebook Twitter Reddit Pinterest Tumblr WhatsApp Email Link
Top